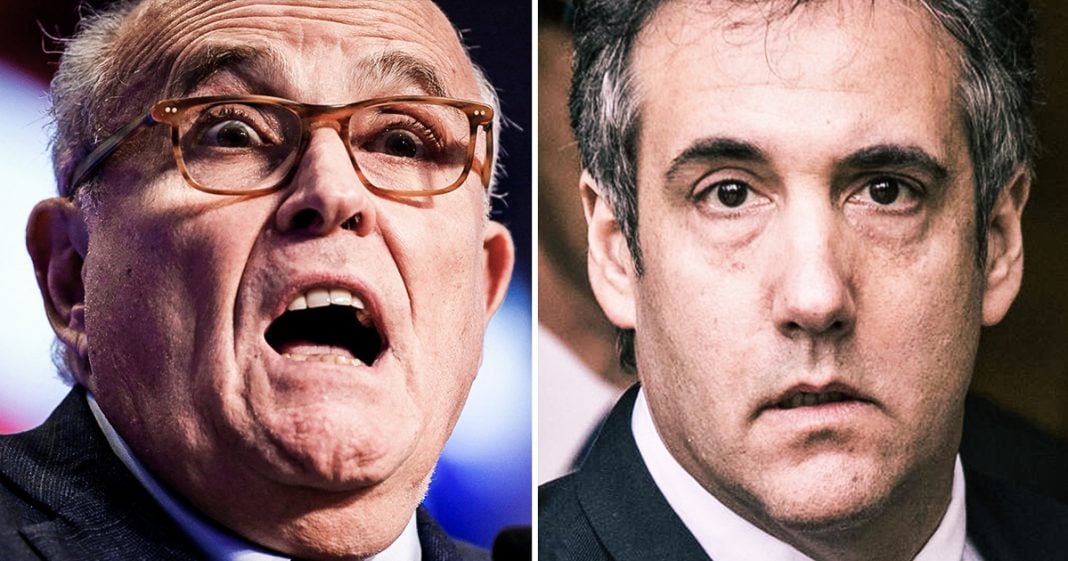 In an interview with the New York Daily News this week, Trump lawyer Rudy Giuliani went on an obscenity-laced rant after learning about Michael Cohen flipping on Donald Trump. Giuliani went off the rails saying that Cohen should be disbarred and that he can’t be trusted. Ring of Fire’s Farron Cousins discusses Giuliani’s meltdown and how it reflects the overall panic we’re seeing from Team Trump.

After news broke yesterday that Michael Cohen had flipped on Donald Trump and he was going to cooperate with special prosecutor Robert Mueller, Rudy Giuliani, donald Trump’s current lawyer absolutely lost his mind, or I guess what’s left of his mind. Giuliani in an interview with the New York Daily News, a Kinda went off in this obscenity laced rant about Michael Cohen. Here’s what he said. And uh, keep in mind is pretty strong language coming up. Just a fair warning there. Here’s a Giuliani said he’s a liar. That son of a bitch should’ve been disbarred months ago. He’s a disgrace to the profession. He’s a really bad guy. He’s a Goddamn liar. It’s no surprise that Cohen lied to Congress. He’s a proven liar who is doing everything he can to get out of a long term prison sentence for serious crimes of bank and tax fraud that had nothing to do with the Trump organization. Now, Giuliani here, uh, is actually right about something.

Michael Cohen should be disbarred. I’ve been saying that for months. Michael Cohen is a horrible lawyer. He has broken the law. He circumvented the law in many instances. And this man needs to have his law license revoked and needs to be permanently disbarred for life. The rest of it though, not so sure about that because Giuliani, you got to remember when you’re sitting there saying that this man is a liar, he’s a son of a bitch. He’s a horrible human being. You have to remember that he worked for your boss for I think what? Twenty years. So if he was so horrible, so awful, so bad, such a liar. Why did your boss keep them around for so long? You see Rudy, you’re a horrible lawyer. Um, we, we can actually look through your legal history and see how bad you truly are. And I have to remind you here that whatever you’re saying to the press that can 100 percent come back to bite you in court because maybe they decide to ask you some questions in court.

For example, why would you say that this man is a liar, a horrible person, and yet defend the man who hired him and kept them employed for almost 20 years? What does that say about your client? What do those audio tapes say about your client where Cohen and him are talking about paying off Stormy Daniels? Cohen is not an honest person, but at this point he’s being forced to be honest because he is, as Giuliani said, trying to save his own ass right now and he knows the penalty for lying to the special prosecutor. We saw that earlier this week with Paul Manafort. It’s not gonna end well for you and Michael Cohen knows it. Cohen also was one of the few people who Donald Trump did not come out and outright defend when he became embroiled in all of this. I mean Trump stuck his neck out for manafort and Papadopoulos out there telling us that people’s lives are being destroyed, but he never said a word about Michael Cohen.

The man who did so much him saved his ass countless time saved his company, was doing all kinds of shady deals for them and he couldn’t even tweet out. I support Michael Cohen. That’s part of the reason Cohen flipped. That’s part of the reason he decided to give up this charade of waiting for Trump to come in and save him because he understood it wasn’t going to happen. The only person Donald Trump cares about is himself and anybody else out there with any information about what’s transpired with the Trump family, I suggest you go ahead and flip on him too, because God knows at the end of the day, if he gets the opportunity to save himself or save you, he’s definitely going to save himself. That’s what Michael Cohen realized. That’s why he flipped, and that’s why Rudy Giuliani, the guy that’s got to defend Trump, is freaking the hell out right now.