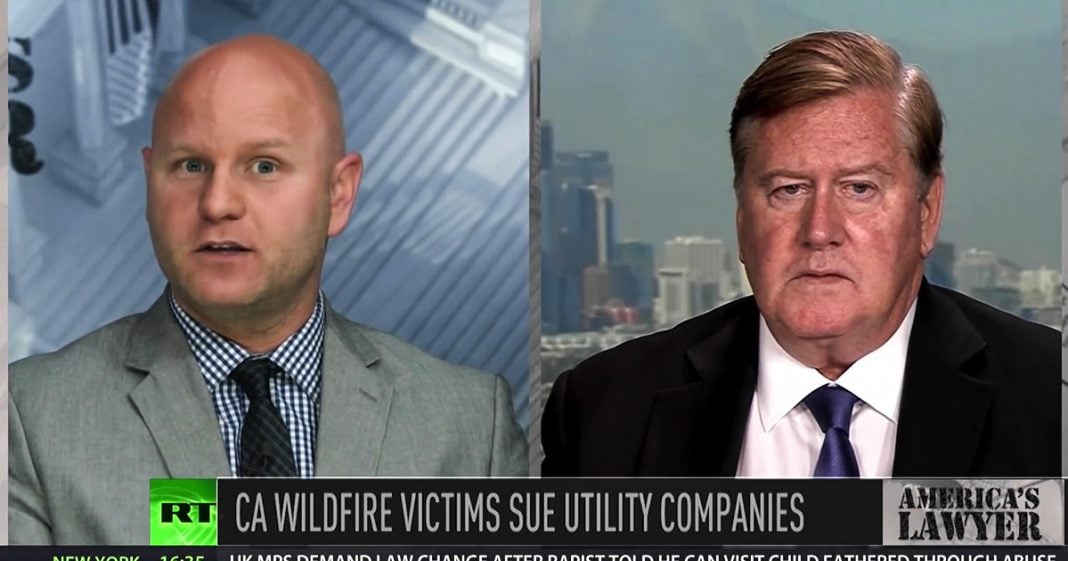 Via America’s Lawyer: Farron Cousins, Trial Magazine Executive Editor and Attorney Peter McNulty discuss whether electric companies like Edison and PG&E should be held responsible for wildfires in the State of CA, as lawsuits begin to emerge to hold the responsible parties accountable for their negligence that led to the fires.

Farron Cousins: The Camp Fire wildfire in the state of California has finally been contained after raging on for several weeks, more than 80 people lost their lives in the fire and hundreds more are still missing, and as those flames are being extinguished, the survivors of this fire and other fires that have recently happened in the state of California, they’re trying to figure out how to put their lives back together after all of these massive wildfires that we’ve seen over the last 12 months. And more importantly, all of the victims want to know why these fires keep happening.

Thankfully, there are lawsuits that are beginning to emerge to hold the responsible parties accountable for their negligence that’s led to these fires. And I have attorney Peter McNulty with me now to tell us about these emerging lawsuits. So Peter, start by telling us how companies like PG&E might be liable for some of these fires. You know, there’s, there’s other utility companies as well. What’s the liability issue here for these wildfires?

Peter McNulty: In California, whether it’s PG&E or Southern California Edison, if it’s determined that a cause of the fire related to either defective equipment or a failure of the equipment, even without fault by the utility company, the utility is held responsible under an inverse condemnation theory, which means basically it results in a taking of property. So if you suffer property damage, personal property damage, or anything related to that separate and apart from tort damages, you’re allowed to recover directly from the utility without having to show negligence or any type of fault at all. And that’s unique to California. In addition, California law also permits you to file a tort suit seeking personal injury damages, which run the panoply of everything you would expect in a usual personal injury suit, emotional distress or dislocation, depression, ptsd, and the like. In that type of situation, for those damages, you do have to prove negligence.

Peter McNulty: That’s exactly right. What, what both PG&E and SCE have done is they’ve known for years and years and years and especially in Southern California for Edison, that there is climate change and that there is more of a severe drought and high wind conditions that occur periodically, especially in the fall. In addition to that, the biggest problem that these utilities have faced but I’ve never dealt with is that their pole and transmission systems are not only antiquated but overloaded. For example, Southern California Edison has known since 2015 that their poles haven’t been inspected in a number of cases that their poles have vegetation around them that can cause in a high wind situation either arching or other problems and that some of their poles literally will fall down in winds that are forecasted and expect it. And you know, at the end of the day, the dirty little secret has always been that it’s cheaper for these utilities to not underground their poles to not do their inspections, to not put in metal or fire resistant poles because it’s actually cheaper at the end of the day to fight a fire lawsuit than it is to completely change the infrastructure to make it safe for all of the people who are out there.

Farron Cousins: Right. So paying out money in these lawsuits for these utility companies, it’s just part of the cost of doing business. Do you save more money by not addressing the problems and just paying out the law suits or is it going to be more financially beneficial to fix the equipment and not have to worry about lawsuits? You know, that we see this all the time in cases like this, whether it’s pharmaceutical, whether it’s, you know, energy companies, whether it’s chemical companies, it’s always the same. Is it cheaper to pay lawsuits or is it more cost efficient to go ahead and fix the problems and usually they’re going to go with, let’s pay off the lawsuits, but I want to focus specifically real quick, your handling cases for the Woolsey Fire, not the Camp Fire that is currently being contained in extinguished. So tell us about the Woolsey Fire and what kind of damages are being sought with those lawsuits.

Peter McNulty: Okay. The Woolsey Fire basically started on November eighth at about 2:24 in the afternoon. Interestingly enough, Southern California Edison reported an outage at their station basically adjacent to where two fire points of origin were actually captured on film by a firefighting helicopter and a news helicopter from channel seven. That 16,000 volt transmission line has two separate ignition points underneath it that occurred. Basically, the report of the trip occurred two minutes before the fire was actually reported. So we feel pretty confident based on our initial assessment that Edison’s equipment was clearly at fault and a substantial factor in causing the ignition that started the Woolsey Fire. And then after that the Woolsey Fire started off in Chatsworth and Simi Valley and literally raced across the Santa Monica mountains all the way to Malibu, burning straight to the ocean.

In doing that, there were probably over a quarter of a million people who had to be evacuated by their homes. There were maybe as many as a thousand to 1500 structures, not just homes, but structures destroyed completely in the fire. Untold misery of all of the people that were in the fires path. And those are the people, those are the victims who we’re representing, in terms of trying to hold Edison accountable. And if it turns out that Edison had other folks who had equipment on their lines that may have caused overloading, we’ll consider bringing them in too. But at the, at the end of the day, in this particular case, the Woolsey Fire, it clearly seems to be Edison who is primarily at fault.

Now, if we can show that Edison’s equipment had anything to do with the fire, everyone who lost personal property and business property as well as homes, any type of property at all, they can recover damages without showing fault. However, if we’re able to show fault and we think we will be based on Edison’s history of not performing pole remediation, not undergrounding their lines and not doing, if you will, the safest thing, maybe not the cheapest thing, to protect both their rate payers and the people in the path of the fire, we feel will be able to establish negligence.

And then they’re open for basically any damages, all personal injury damages. And in a case like this, if we’re able to show willful or wanton misconduct or conscious disregard for the safety of the people who were injured or suffered losses as well as others in the fire path, conceivably punitive damages can be awarded.

Farron Cousins: So right now, the California legislature, they’ve proposed a new bill that would actually protect companies like Edison and PG&E from wildfire costs. So can you tell us what that’s about? I mean, why is the state actually trying to protect the utilities who are liable for these fires?

Peter McNulty: It seems insane, doesn’t it? Well, Jerry Brown our lame duck governor finally signed a bill in September of 2018, Senate Bill 901, which basically doesn’t come into effect until 2019, so it really doesn’t affect either the Camp Fire or the Woolsey Fire, but what that bill purports to do is in a sense, protect the utilities by allowing them if they show that they have engaged in some sort of, if you will climb it and vegetation remediation, pole protection and acted responsibly that they can then petition the PUC and eventually the court to allow them to recoup a certain percentage of their losses based on either ratepayer increases or by issuing a bond that would cover in a sense defer those expenses out over 10 or 15 years so that the utility basically doesn’t go broke.

PG&E for the Camp Fire probably has about $1.7 billion of insurance. SCE, for the Woolsey Fire has about a billion three. Both of them have, I should say a favorable audience in the state capital where the legislatures decided that to prevent these companies from threatening bankruptcy or going bankrupt because there’s no one else because in a sense they all have a virtual monopoly on power delivery that to allow them to continue and help them share without going bankrupt the rates, they’re in a sense giving them protection. It seems like a bad idea because the incentive for business, and you mentioned pharmaceutical companies and banks and the like, the incentive for companies to correct their conduct to make things safe and to do the right thing is a financial penalty if you allow them to defray that penalty, by passing it over to the innocent victims and rate payers. How is that fair?

Farron Cousins: Exactly. Listen, Peter, I’m glad we’ve got people out there in California like yourself fighting for the rights of the victims here. Please keep up the good work and thank you very much for talking with us today.

Peter McNulty: Thank you. Really a pleasure and we’ll keep on trucking.