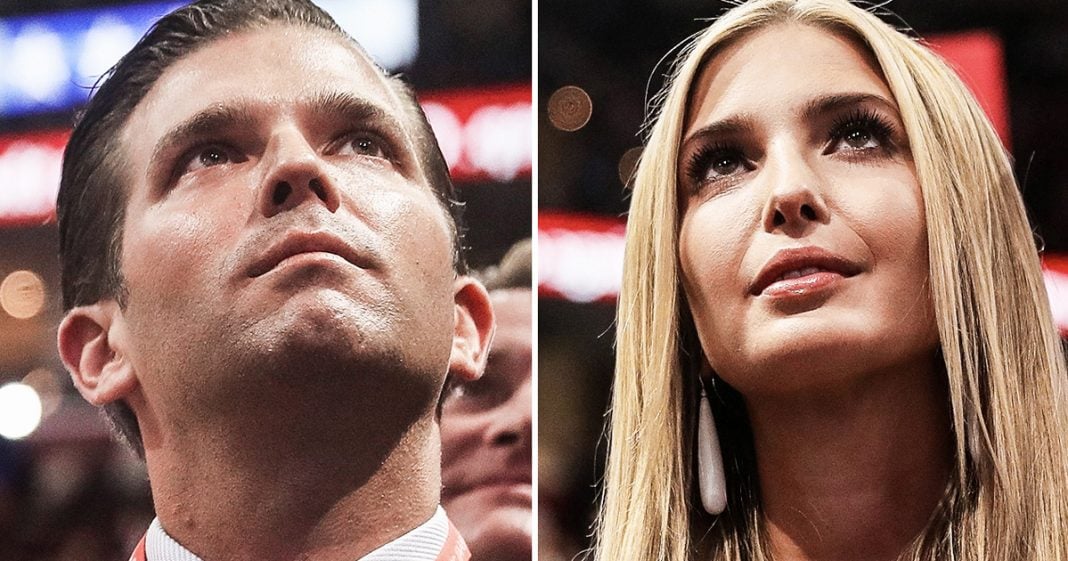 According to reports, special prosecutor Robert Mueller is now setting his sights on Ivanka and Donald Trump, Jr.’s involvement in a real estate deal that may have been used as a political tool for Donald Trump. The deal revolves around the talks for Trump Tower Moscow and the planned delivery of a $50 million penthouse to Vladimir Putin. The pieces of the puzzle are now out in the open, the only question is whether or not they actually fit together. Ring of Fire’s Farron Cousins discusses this.

So we’re coming off a pretty big news day yesterday with most of that big news revolving around the Mueller investigation into Donald Trump and apparently his family as well. According to a lot of reports, the two newest targets, or I guess the two latest slash biggest targets right now are Ivanka Trump and Donald Trump Jr. Specifically their involvement with the proposed Trump tower Moscow deal. Here’s what we know so far, and a lot of this came out after Michael Cohen agreed to cooperate with Robert Mueller admitted that he lied in front of congress. He’s been charged with that now, and he is fully cooperating, but what Cohen lied about was the Moscow deal. One of the things we’ve learned in this came out after that was that they had actually proposed giving vladimir putin a $50 million dollar penthouse in Trump tower. Moscow that has never actually come to fruition, has not been built.

But there were multiple attempts by the Trump organization, Trump family to get it built. And that’s where Ivanka and Don Jr. come in as. According to Cohen, they had been involved with the proposed deal to build the Trump tower in Moscow. Again, the involvement of Cohen himself in the Moscow deal is what he admitted that he lied to congress about. So here’s where we’re at right now. I mean, obviously an organization coming in wanting to build a building in Moscow. There’s nothing illegal about that. That’s perfectly fine to do, but. And this is the piece that molar still has to be able to put together. Improve. Was that proposed deal? Were the negotiations happening with Ivanka and Don Jr. and Cohen and even Trump himself? Were they to get some sort of political favor in exchange for building the tower in Moscow? See what’s happened right now is that we have all of the pieces of the puzzle for Mueller.

I mean we got so mucH new information, new evidence yesterday that at this point, yeah, we’ve got every piece we need. The question is, are they the correct pieces to this puzzle? Do they fit together? Because again, if Mueller cannot prove that they were somehow trying to use this real estate deal in Moscow to get the Russians to help them, you know, when the election, then there’s nothing to it. This is just another real estate deal that never came through. Now do I think that’s what happened? Absolutely not. I mean given the fact that Cohen is agreed to give information on this, it seems like there’s probably a lot more to it than meets the eye, but at the same time we’ve been going through about a year now of getting hugely optimistic. Every time new indictments come out or when somebody starts flipping on Donald Trump and so far nothing.

so at this point we’ve got to kind of reserve or optimism a bit and wait for that final report, which is what is happening now. But if mueller is specifically going after Ivanka and Don jr, which we know he is because sources have said that he is actually asked witnesses about Ivanka and Donald Trump jr’s involvement in this particular Moscow deal. So we know he is going after theM. That means the next person up is also the last person up because that would be Donald Trump himself, and if Cohen who worked on this project is giving all of the information that he has about Ivanka and Don, Donny Jr., then you can bet that he also is giving information about Donald Trump senior’s involvement in what took place and what never actually happened. And again, reserve the optimism just a little bit because miller still has to be able to put those pieces of that puzzle together to show that this real estate deal was directly tied to the alleged to collusion, uh, that took place with the Trump administration. If he can’t prove that, then this entire Moscow real estate deal means absolutely nothing.