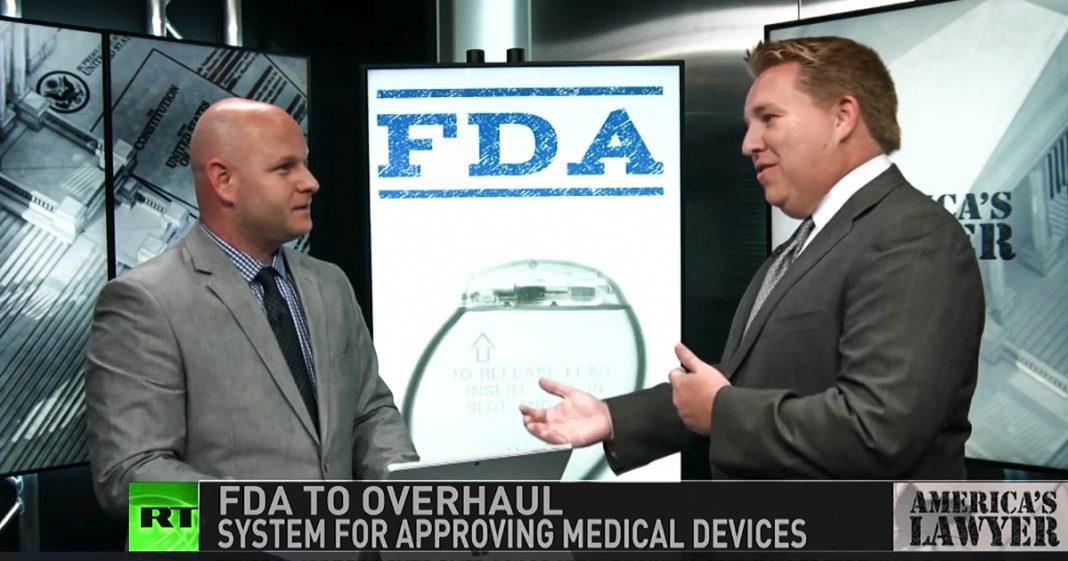 Via America’s Lawyer: Farron Cousins and Attorney Daniel Nigh explain how the FDA is planning to overhaul the nation’s decades-old system for approving medical devices, which has long been criticized by experts for failing to catch problems and has put thousands of patients at risk.

Farron Cousins: The Food and Drug Administration is overhauling the most common way medical device manufacturers bring their products to market after a consortium of news outlets published investigations into medical device injuries. Joining us to discuss this is attorney Daniel Nigh who has extensive experience with medical device litigation. Daniel, thank you for being here. This is something you and I actually over the years have talked about, you know, at length. So give everybody a quick primer. How exactly are current medical devices approved to go into the market?

Daniel Nigh: You know, absolutely. Well, there’s, there’s really two different ways that they get onto the market. There is called a 510(k) process and then there’s a premarket approval process. So when people think about products getting approved by the FDA, I think what’s in most people’s minds is the premarket approval process, which is you actually have to prove with clinical trials both the effect of efficacy and the safety of the product.

Okay. Whereas the 510(k), all you have to do is show that your product is substantially similar to another product on the market. And the FDA gives it a rubber stamp to enter into the market. Now what we found is that a lot of those products that got 510(k) approval, we’re not substantially similar because even with medical devices, one small change to a product can have catastrophic results. We’ve seen that with a bunch of different types of products.

Farron Cousins: So say for example, I go and I make a new hip.

It can change the weight distribution, it can change where it is in the body, how the other muscles react with it. So, so just proving it similar hasn’t worked very well for a lot of these medical device companies?

And so it’s, it’s out inside of people and they continue to implant it for the next six years. And then finally they realized, oh, this product is also a problem. So we see that as, as an issue as well. So the 510(k) processes is really a bad process for people and I’d be surprised, I’m surprised it’s taken this long to see any changes to that process.

Farron Cousins: So what are the proposed changes? I mean what is the FDA thinking about doing right now?

Daniel Nigh: So what they’re looking to do is they’re trying to revise that 510(k) process that you actually have to do more clinical trials to prove up your, your products and also continuing to do those clinical trials throughout the lifetime, lifespan of that product.

Farron Cousins: So this would mean rather than just getting the approval one time and it’s out there in the market, every now and then they go back and retest it?

Daniel Nigh: That’s right. That’s right. So you’ll continue to have a clinical trials. You’ll be evaluating the data amongst the, the universe of people who have had it implanted. You’ll see how often they had to be revised, things of that nature. I mean, we’re not as, we’re not as good as a nation like Australia where they have a registry system.

These, these new rules aren’t gonna get us there. You know, I’d love it if we had something like Australia where they actually track the safety and efficacy of every single device and how often they have to be revised because then we can quickly see the bad products, right. But we’re at least getting a step further where they are at least requiring some clinical trials on safety and efficacy. So we, you know, the ones that really stand out as bad products, you know, with these new rule changes would hopefully, you know, bring the worst of the worst out of out of the market.

So this happens very frequently, you know, these defective medical devices. This isn’t just, Oh, you know, 30, 40 people, we’re talking about millions.

Daniel Nigh: Oh yeah. I’ve represented over a thousand hip implant clients myself at one attorney representing over a thousand hip implant clients. So, and there are many other attorneys who have represented clients with these bad products. And I suspect there are many people who’ve had bad products who never sought the legal help, you know, but there’s no doubt it’s a catastrophic failure on the part of industry and the FDA over the last 40 years.

Farron Cousins: And so it is interesting that we’re seeing this new proposal from this particular administration, not exactly the most consumer friendly administration we’ve had in a long time, but you know, I give credit where it’s due. If they can pull this off, if they can actually make these changes within the FDA, not only is this going to benefit consumers, but as you know, FDA commissioner said this might help corporations too in the form of maybe you’re not going to get sued all the time if you’re actually doing the testing that you’re supposed to do.

Daniel Nigh: Absolutely. Thank you.