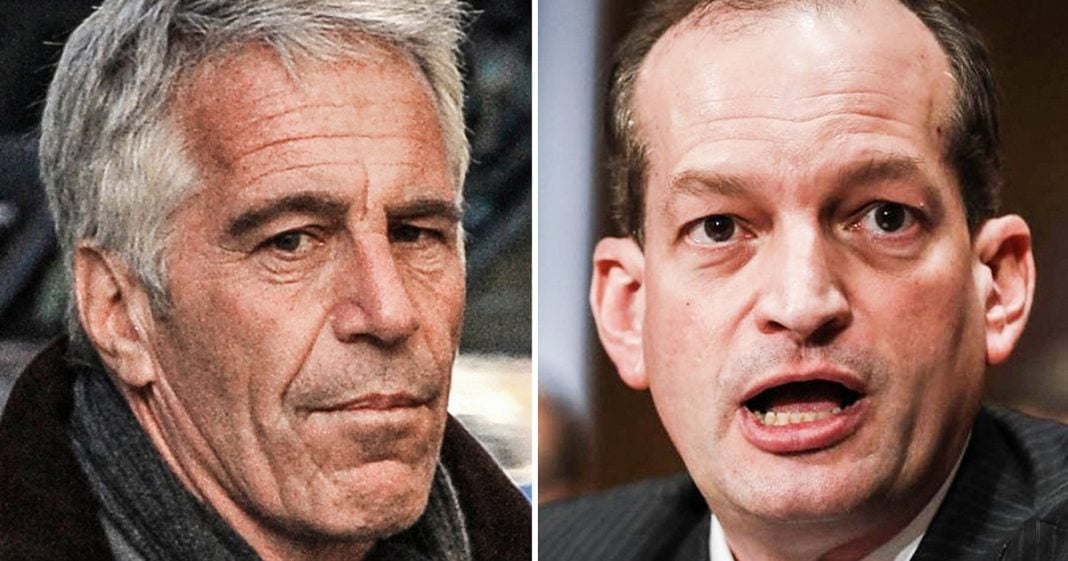 According to a bombshell new report by The Miami Herald, Trump’s Labor Secretary Alex Acosta is the man who made the sweetheart deal with billionaire hedge fund manager Jeffrey Epstein after he was accused of sexual misconduct with no fewer than 36 women and young girls. The charges and evidence were overwhelming, yet Acosta, then a US attorney in Florida, cut the billionaire a deal that allowed to get away with virtually no punishment. Ring of Fire’s Farron Cousins discusses this.

According to a bombshell, new report from the Miami Herald, Donald Trump’s labor secretary, Alexander Acosta, during his time as a US attorney in the state of Florida is the man who worked out a sweetheart deal with billionaire hedge fund manager, Jeffrey Epstein, after Epstein had been accused of sexually molesting, raping and other sexual misconduct of no fewer than 36 women and young girls, many of whom were under the age of consent, which by definition would make Epstein a pedophile. Now, if you’re not familiar with the Epstein case, it’s something we’ve talked about many, many times here on ring of fire, but let me go ahead and give you a refresher. Jeffrey Epstein, again, billionaire hedge fund manager. An estimate show is worth about $2,000,000,000. That was official. Net worth has been disputed by some. Nonetheless, the guy has tons of money, private planes, private islands, and what he would do was throw these sex parties essentially where he would bring in all of these young underage girls and force them to have sex with him and his guests.

Some of the people who have been known to be chartered around on Epstein’s private plane to some of these parties, which is as far as we can confirm their involvement. That includes Donald Trump and Bill Clinton, so Epstein was a hugely politically connected guy and it was those political connections in addition to his $2,000,000,000 roughly net worth that allowed him, again, 36 counts to get away with only a 13 month prison sentence. Worked out by Trump’s now labor secretary Alex Acosta and that 13 months in prison really wasn’t even that bad for Epstein. He was allowed to have his own private wing in the prison. He was allowed to leave for hours upon hours every single day as part of a work release program. So basically he was staying in a less nice apartment for about a year. Then he would have had he not been convicted, he didn’t have to go to a federal trial.

He did have to register as a sex offender and pay restitution to the victims, but that was it. He got off with not even a slap on the wrist and that was all thanks to the man that Donald Trump currently has running the department of Labor, Alex Acosta. Epstein is an absolute monster record show in the Miami Herald, is reporting this, that there were as many as 80 women and young girls whom Epstein victimized during the course of his little orgy parties, 80, many of whom were under the age of consent. These were young girls, some as young as 14 or 15 years old. Epstein would bring them in, some of them from out of the country according to court documents and basically employ them as his little maid slash sex slaves for his parties. Epstein is an absolutely disgusting human being and he was able to get away with no punishment whatsoever. Thanks to Alex Acosta and is very strong political ties to both Democrats. As I mentioned, Bill Clinton and Republicans. Donald Trump Epstein is living a life of luxury right now, billions of dollars, private island, private jets, and these women are going to have to live forever with the knowledge that they were used and abused by this man. And that the guy who let him off the hook is now serving in a very cushy cabinet position in the Trump administration.