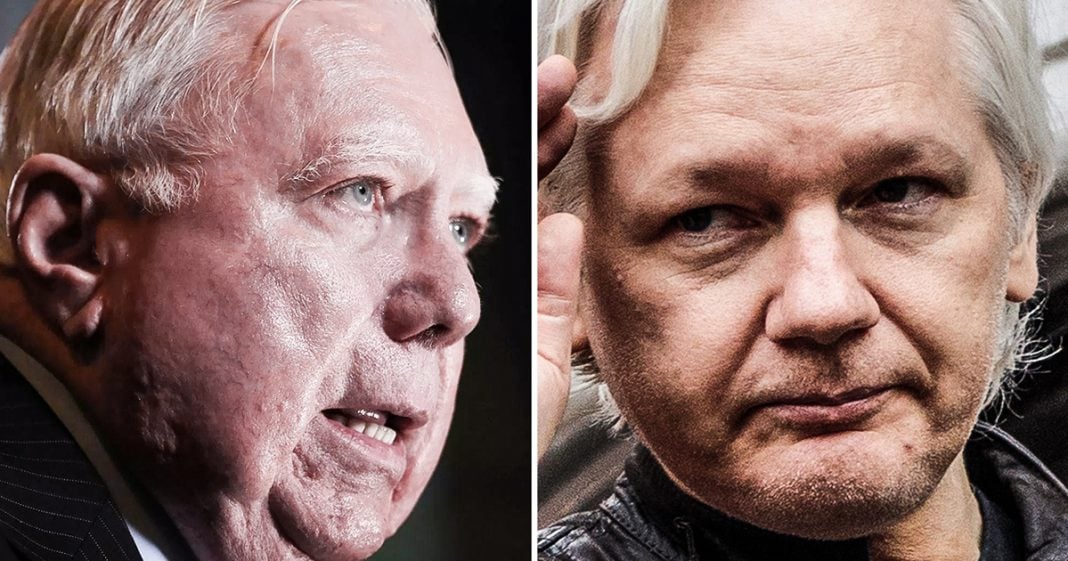 Jerome Corsi is trying desperately to backtrack on statements he made to the Special Prosecutor’s office now that he knows that they can find out if he’s lying, so during a recent interview, he claimed that it was God who told him about the Wikileaks release of Democratic emails, and not Julian Assange. Robert Mueller has emails from Corsi saying otherwise, but that isn’t stopping the right wing blowhard from trying to cover his tracks. Ring of Fire’s Farron Cousins discusses this.

According to Jerome Corsi, the Roger Stone confidant, who allegedly helped orchestrate the release of the Wikileaks, emails that were hacked from the DNC, according to Corsi, he knew and told Roger Stone that these emails were coming out, not because he had been having meetings with Julian Assange, but because God told him that Wikileaks had these emails and they were going to release them very soon. Now, of course, he made these comments during a recent interview with Ari, Melbourne on Msnbc, and the reason he’s out there trying to say these things is because the dude was just busted lying to the special prosecutor’s office because they have emails from Corsi to stone showing that Corsi was meeting with Juliana Saanich and knew they had the emails and was telling Roger Stone that get ready. They’re going to release them. It’s going to be huge. It’s going to hurt the Democratic Party, and I know this because I’m meeting with our friend at the embassy.

Those were his words, but according to him now, after he got busted for lying about some things. Oh No, no, no. I didn’t meet with Julian. I only said that because I was embarrassed to say that I got the information from God, so I Guess there you have it folks. There’s the collusion. It’s between Jerome Corsi and God Almighty himself. Right. They were conspiring to help Trump win. I mean, look, Corsi has always been a conspiracy theorist. He actually just hired one of the worst lawyers in the country, Guy who actually sued his own mother, but Corsi is absolutely bonkers at this point. Maybe he should try after rejecting molars, plea deal to try and insanity defense because I think he’s got a really good case there because if he’s actually trying to convince the public and prosecutors that God told him that Wikileaks was going to release these emails, then the guy is certifiably nuts, but I also want to take a minute here and get into another issue and that is the issue of Julian Assange recently.

A lot of people have been talking about, you know, whether A. Sondra is a hero. Is he a villain? Does he deserve to go to jail? Should he be prosecuted and whatnot? Here’s the. Here’s my take on the whole thing. I’m Wikileaks has done some great work, right, and there’s no question about that. They, the information that they have released has been accurate. One hundred percent. I mean, you’re batting a thousand over there. Here’s my issue with it and no, I don’t feel that Julian Assange should go to prison for it and that puts me at odds with some of the folks on the left and that’s fine, but I don’t think he should, but I personally do not like a sauna. I do not think he is a noble actor. I think he is a partisan hack with an agenda because as we all remember, they had the RNC emails as well, allegedly to them, yet they only chose to release the DNC emails.

If Wikileaks was truly about transparency and about revealing the truth to the public, they would have released both sets of emails. Instead they weighed their options, tried to figure out who they could benefit more from if they won the election and they went with Donald Trump. So that’s my big issue with Wikileaks and massage. They are not heroes in all of this. They are organizations that have an agenda and they are trying to push their agenda. It shifted from being about transparency and uncovering the truth a long time ago. I do not trust Wikileaks and I do not trust the signage, but in terms should be in jail for releasing this information. Should Wikileaks be prosecuted for releasing it? No, but it’s very obvious that they preferred one candidate over the other and only chose to release the damaging info and the Democrats while hanging on to the damaging info of the Republicans. That’s what I have a very severe problem with.