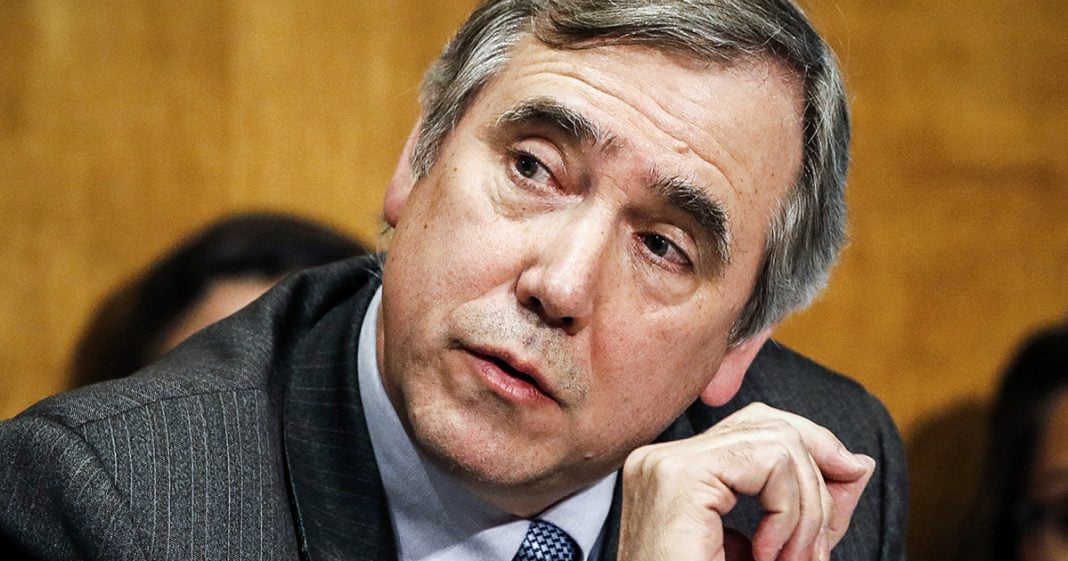 Democratic Senator Jeff Merkley is taking aim at Big Pharma’s price gouging with new legislation that would prevent drug companies from having access to Medicaid, Medicare, and VA patients if they don’t lower prices for American consumers. This is a huge deal, but it seems unlikely that Republicans in the Senate will go along with it. But that doesn’t matter too much, as Ring of Fire’s Farron Cousins explains.

Democratic Senator Jeff Merkley has introduced legislation that would punish drug companies here in the United States if they do not lower their prescription drug prices. Here’s what’s so brilliant about this legislation that Merkley has put forward. I love this. I love what he’s doing with this. If drug companies do not lower prices of prescription drugs for American citizens to the same level at which people overseas pay for those drugs, then those drugs that were paying the exorbitant markup on will no longer be covered by Medicaid, medicare or the Va. Those are some of the largest markets for prescription drug sales here in the United States. So basically merkley’s legislation is saying, all right, Big Pharma, you want to continue to price gouge American consumers. Then you go right ahead and do that, but if you’re gonna do it. We’re no longer going to allow a government funded program to buy that particular drug.

You are going to be punished and you could lose as much as one third of your total sales here in the United States because you chose the price gouging. American consumers, I mean a third, they could lose a third of their profits if this bill ever becomes law, and that’s the problem. You’ve got republicans controlling the senate right now in a about a month and a half, they’re going to have an even bigger majority in the senate, so this piece of legislation is very unlikely to ever pass that actual chamber, but that’s the point. Even if you can’t get it passed, you still have to introduce it. You still have to push it, and then you have to force the republicans to vote against it. How is that going to look into years when some of these republican senators go back to their constituents running for reelection and they’re asked the question like, hey, a miracle he was going to lower prescription drug prices for us and you voted against it.

Could you tell us why you care more about Big Pharma’s profits than people dying because they can’t afford prescription drUgs? It’s not gonna work out very well for the republican seeking reelection and democrats underStand that mercury is a very smart person. He knowS what he’s doing here because either you win and this legislation becomes law and the price gouging from Big Pharma is put to a stop here in the United States or you win because you show the public that the era that the republicans care more about Big Pharma’s profits than they do about American consumers. There is literally no downside whatsoever to this piece of legislation and more democrats need to take merkley’s advice, follow his example, and do the same thing. We can do the same thing with a medicare for all piece of legislation because even if it doesn’t pass, the republicans have to vote it down and then you’ve got a great issue to run on in 20 slash 20 democrats right now appear to be setting themselves up for policy battles heading into the 20, 20 election and that is exactly what they need to be doing. They’re not going to win on personality. They’re not going to win by telling us, trump is horrible. Everyone knows that they’re gonna win by showing the American public that they care about the issues that they’re working on the issues, but they can’t get the issues passed into laws because of the republican party. That’s how they’re going to win in 20 slash 20, and I’m oPtimistic because it seems like a lot of democrats, with the exception of chuck schumer, seem to be waking up to that reality.