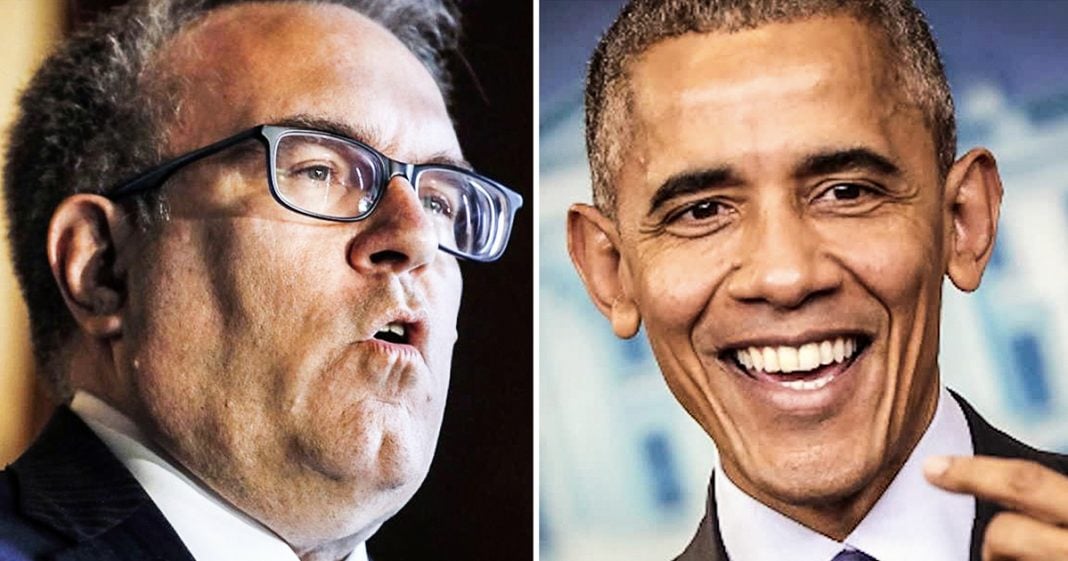 The United States is on a path of self-destruction says the recently-released climate assessment. But the warnings contained in that assessment have not swayed anyone in the Trump administration as they are now working to undermine their own study and blame it on others. Acting EPA director Andrew Wheeler is blaming Obama for the release of the climate assessment, saying that it was a political tool created by the former President. Ring of Fire’s Farron Cousins discusses the absurdity of these claims.

So last Friday we had the a quadrennial national climate assessment come out from the Trump administration and it gave us dire warnings about the future of the United States, the future of the planet, if we continue to not act on the issue of climate change. Well the Trump administration isn’t very happy about it. They don’t believe the report. Donald Trump is skeptical of it, and so our members of his cabinet, specifically acting EPA director, Andrew Wheeler, Wheeler during conversation with the Washington Post this week said that he thinks the Obama administration is behind the release of this climate assessments showing how horrible things are here in the United States and how much worse they’re going to get. Andrew Wheeler, the acting head of the EPA, who is actually now been nominated to run the EPA fulltime blams Obama for the release of this paper that came out after Trump had been president for nearly two full years.

Somehow it’s Obama’s fault just like everything else in the world and Republican land, right? It’s either Obama or Hillary and Hillary didn’t touch the climate assessment. So I guess it has to be Obama. Here’s Wheeler’s reasoning as to why it was Obama’s fault and then we’ll get into why this guy is an absolute idiot and a liar. This quadrennial report comes out every four years, so Trump’s only been in office for a little under two, so according to the wheel or most of it was done. All of it was done actually, according to him when the Obama Administration was an office and he believes that they conspired to put together a list of worst case scenarios so that when it was released, when the other administration took power, it would make them look bad. So Wheeler has hatched this new conspiracy theory that Obama two years before the election even took place, but we didn’t even know who the nominee is.

We’re going to be, but Obama conspired with the EPA to make this report horrible so that whoever the next president was was going to be screwed and maybe the next president could have been Hillary Clinton or Bernie Sanders. Obama didn’t care because he just wanted to make somebody else look bad. I’m. Here’s the thing about Wheeler’s theory. It’s not true. The report was not completed before Donald Trump came into office. A climate scientists, uh, specifically, uh, Dr Katharine Hayhoe has come forward and said, look, I, I wrote chapter two of this and that was in November of 2017. We were still doing work on this and putting the assessment together after Trump had been sworn in as president and in fact many, many, many, many, many months after that had happened. So just this one, climate scientists has already blown a hole in Wheelers entire conspiracy theory, but that’s not going to stop him.

It’s not going to stop Donald Trump. They’re going to continue denying that a problem exists. They’re going to continue blaming Obama for it. At the same time, cutting the very regulations that have helped give us a little bit cleaner air, a little bit better environment. And I’m not saying Obama is not the blame for any of the environmental problems we have right now. He absolutely is. Oil drilling domestically increased exponentially under his administration, fracking, spread coast to coast. Under his administration, offshore drilling increased under Obama. Coal mining increased under Obama. He did put some good regulations in place that did help. They would have gone even further had we not expanded all of that fossil fuel exploitation during his administration, and that’s why a lot of it was kind of a wash. He did some good things and he did some bad things and in the end they all meet in the middle as most centrist Republicans do.

Now. Excuse me, centrist Democrats. That was quite a Freudian slip there, I guess, but nonetheless, to blame Obama for this report coming out and showing a horrible things are is absolute insanity and Andrew Wheeler knows that the only reason he’s out there downplaying the results and blaming Obama is because he doesn’t want to have to take action. He doesn’t want to have to face an angry public. He still wants to be able to go out and have a nice dinner and not be confronted with people asking why he’s helping to destroy the planet. By planting the seeds of his little conspiracy theory. He is hopefully, or at least he thinks he is giving himself enough clearance to stay away from the issue and continue to not act on it.