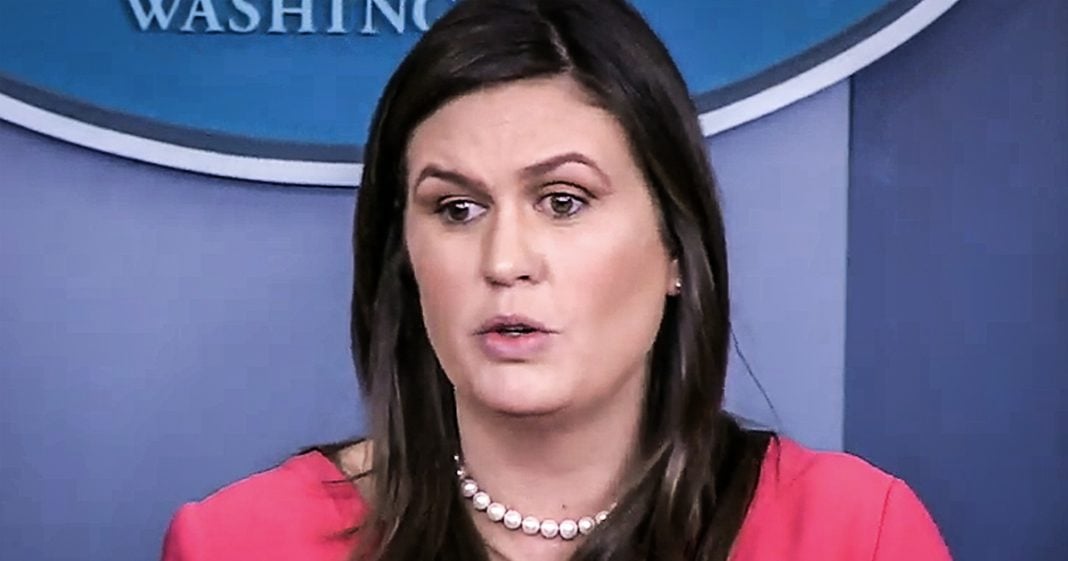 Sarah Huckabee Sanders on Tuesday gave her first press briefing in nearly a month, and she wasted absolutely no time coming to the defense of her boss by saying that women and children at the border shouldn’t break the law if they don’t want to be tear gassed. She told reporters that this is non-lethal and totally ok because Obama did it, too. Ring of Fire’s Farron Cousins discusses this.

On Tuesday, Sarah Huckabee Sanders gave her first press briefing in about a month, and of course she was almost immediately asked about the gassing of women and children at the US border, and she wasted no time at all in defending this administration and their decision to use chemical weapons against children. Take a look.

We saw some powerful in children and adults who are affected by tear gas at US officers, US Mexico border does. The president talked about that yesterday, but one thing we do not hear from him, any expression really great. There were children’s cut off in this as well as the White House regret the fact that children were affected by tear gas and that this situation took place in our investigation under way to prevent this from happening again. Certainly, yeah,

the White House would never want children to be in harm’s way in any capacity whatsoever. Um, however, that is why we are continuing to encourage people to follow the law and go to ports of entry. Uh, law enforcement officials have used appropriate nonlethal force to protect themselves and prevent an illegal rush across the border. And let’s also not forget that this isn’t the first time, uh, that nonlethal force like this has been used. In fact, tear gas was used on average once a month during the Obama administration for very similar circumstances. I’m, in fact, they were actually for far less circumstances because they didn’t have the same numbers. And the mass rush that we’re seeing in this caravan take place. I’m certainly no one wants women or children or any individuals to have this happen, which is why we’ve encouraged them to actually follow the wall and go to ports of entry. Yeah.

So what’s really interesting here is the pivot. She immediately defends, it says role. Of course we don’t want to do it, but you know, they’re not doing it the way we want them to do it. So we’re using this totally nonlethal a thing against them. You know, there’s non-league lethal thing that’s actually banned for use in warfare because it is so toxic. But yeah, it’s not hurting them at all. And by the way, Obama did it all the time. So it’s totally cool if we do it too. Um, I hate to admit this, but actually Sarah Huckabee, sanders is correct about that. Tear gas has been used at the US border 126 times since the year. Twenty 12. So yeah, Obama did it too. That does not excuse what’s happening now. And it’s not okay to excuse it when Obama did it then. But you cannot use that.

Oh, somebody else did it, so I’m going to do it too. That didn’t work when you were a child. Did it? Sarah? It doesn’t work for children in school. It doesn’t work as a defense in a court. So don’t try to use it with the press there. Yeah, it horrid. When Obama did it, just like it’s horrid when the Trump administration does it. We are watching children choke on tear gas. And as for the do it the legal way through the ports of entry, your frigging boss close the ports of entry. You Liar. They can’t do it the legal way because you’ve taken the legal option away from them. Your boss put a rule in place that luckily a judge has struck down temporarily. That band asylum, he banned it, so he took away the only legal option that these people had because technically what they’re doing is not illegal until your boss came along and made it illegal, so why don’t you try being honest? Yeah, you were absolutely right that Obama used tear gas at the border and I’ll give you that, but everything else that you said in your response was an absolute lie to cover up the atrocities being committed by your boss, turning these people who are legally seeking asylum into criminals.