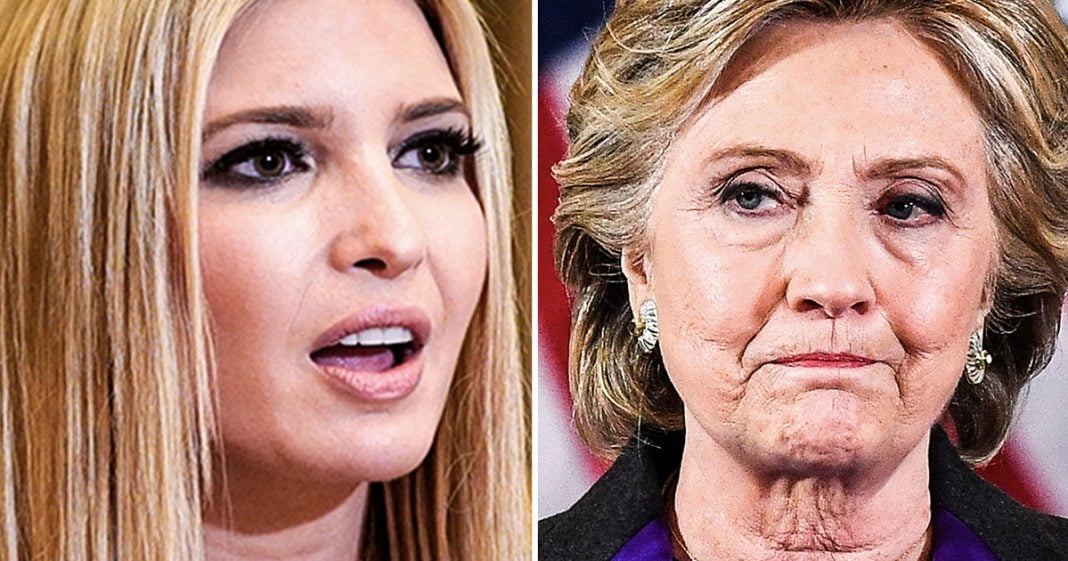 After years of hearing the phrase “Lock her up” chanted during Donald Trump’s rallies, it was revealed recently that Ivanka Trump has also been using a private email account to conduct official White House business. This is almost identical to what Republicans said Hillary was doing, but Ivanka swears that she’s not guilty while Hillary still is. Republicans have lost their collective minds, as Ring of Fire’s Farron Cousins points out.

So it was recently reported that Ivanka Trump has been busted using her private email account to do official business from the White House. Now, if that sounds familiar, that’s the same thing that Republicans are still super pissed off at Hillary Clinton for doing and still chanting, lock her up, wanting to see her tried for treason, for using private emails on a private server while she was employed for the US government. But Ivanka Trump in a recent ABC news interview swears up and down that her misuse of emails is nowhere near as bad as hillary. So let’s please just keep talking about Hillary and in, in an avoid talking about Ivanka yet not going to happen. Ivanka, because here’s the thing, your dad, your dad made this a campaign issue. He riled up all of these. No nothing. Republicans throughout the United States getting them to chant, lock her up because of the use of a private email account.

So you can’t just wish this away, you can’t tell daddy to make this disappear. Daddy’s the one who created this hell for you. And here’s the kicker. Personally, I don’t care if you’re using private email, I mean really it’s not even that big of a deal, just like it wasn’t that big of a deal with Hillary Clinton doing it, but you, your party, your father made this a big deal. He is still out there tweeting to this day that Hillary Clinton needs to be investigated. Yesterday he was talking about the fact that they quote acid washed the server and never gave it to the FBI, which is an absolute lie. I mean, I’ve said this a hundred times. I’m apparently going to have to say it 100 more times. The FBI did. The FBI did get their hands on on Hillary Clinton’s servers. They made copies of them and then they took the copies back.

They didn’t remove the physical server because they didn’t need to because that’s how most cyber investigations go. They come in, which they did. They make carbon copies of all of the files, all the registries, everything in that system, and then they take the copies back and review it there. They rarely, if ever, take that physical piece of machinery, the FBI, the investigators, did everything correctly with the Hillary Clinton email investigation. They did so no matter what you say, they didn’t get their hands on, they acid washed them. None of that is true, but that doesn’t matter to the Republican base. These people don’t care about facts and logic and truth. If they did, they never would have voted for your father. Ivanka, so go ahead and whine all you want about people talking about your emails because you know what that is. That’s a little bit of Karma. That is Karma coming back to bite you harder than ever, and if you’re upset about it, if you’re unhappy about people saying, but her emails, then maybe you need to go have a little talk with daddy and get them to tell his followers to stop chanting. Lock her up because before you know it, they’re going to be chanting that about you as well.