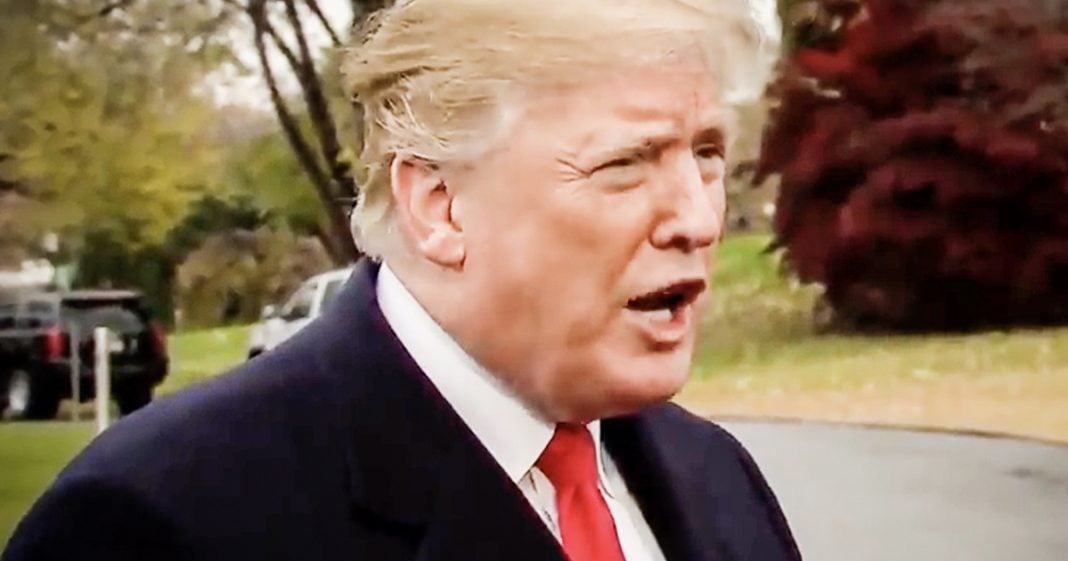 Donald Trump loves to brag about his intelligence, but there’s nothing there to brag about. When asked recently about the climate change report that the government just released, the President said that he doesn’t believe in climate change, though he is very intelligent, because the air and water are “at a record clean.” Not only is that not true, but that doesn’t have anything to do with climate change. Ring of Fire’s Farron Cousins discusses this.

That’s the end. That’s the end of that crazy. I don’t even know to see if I can call that a statement, but I mean it ends with and it takes many people to start off with. This man’s not even making complete sentences anymore and we want to act like he’s going to be the guy that can run this country. I mean, not even just with regards to climate change, like he says where it flows down the Pacific put into the US. This guy doesn’t even know basic geography. He doesn’t even know how things work. He doesn’t understand ocean currents. He doesn’t know that the ocean is not an atmosphere. I mean, they look, you look at our, uh, uh, women. You’re talking about an atmosphere. Oceans are very small. Those aren’t the same things. Those are the same things. We’re dealing with a level of stupidity that I didn’t think we’d ever hit in the White House.

Honestly. I thought George W dot Bush was going to be as dumb as they could get. Trump just outdid everything Bush ever said. All the little bushes items, all the stupid, you know, slip ups with his words and the choking on the pretzels and all of that. Yeah. Trump just outdated with one interview with the Washington Post and, you know, let’s go ahead and fact check it a little bit. Right? It’s not enough to just make fun of the guy for being a moron. Our air and water. Is that a record clean? That’s what he said at a record clean. Now, aside from the fact that that sentence does not make grammatical sense, it’s not. It is not at a record, clean the air got slightly better in the United States last year, but that was actually before your administration came in and started cutting all those regulations that are going to allow polluters to emit more into the atmosphere, which by the way, again, not the ocean, the atmosphere, so yeah, the air got better a little bit, but that was because of the regulations Obama put in place.

You’ve killed those and you’re going to kill more of them. That’s your goal. You’ve set it asked for the water being cleaner. That’s nowhere even near the truth. The water in the United States is actually getting worse and we have a PFAS chemicals contaminating water across the United States. We have lead in water all over the United States. Flint still doesn’t have clean water. Neither do more than 2000 other location cities in the United States, but water’s not clean at all. The water is getting worse. The climate is getting worse and you’re gonna sit there. Make up nonsense about garbage flowing south in the Pacific, yet ending up in the United States, the ocean is the atmosphere. You don’t know what you’re talking about. The best thing you could do, please, for the love of God has resigned or even better than resigning. Go get a cat scan and release the results to the public because I think we’re entitled to see what’s happening in your brain because based on these statements that you gave these half sentences that lead nowhere. I think we have legitimate questions about whether or not it’s time to invoke the 25th amendment because you do not seem like someone who is fully competent enough to serve as the president of the United States.