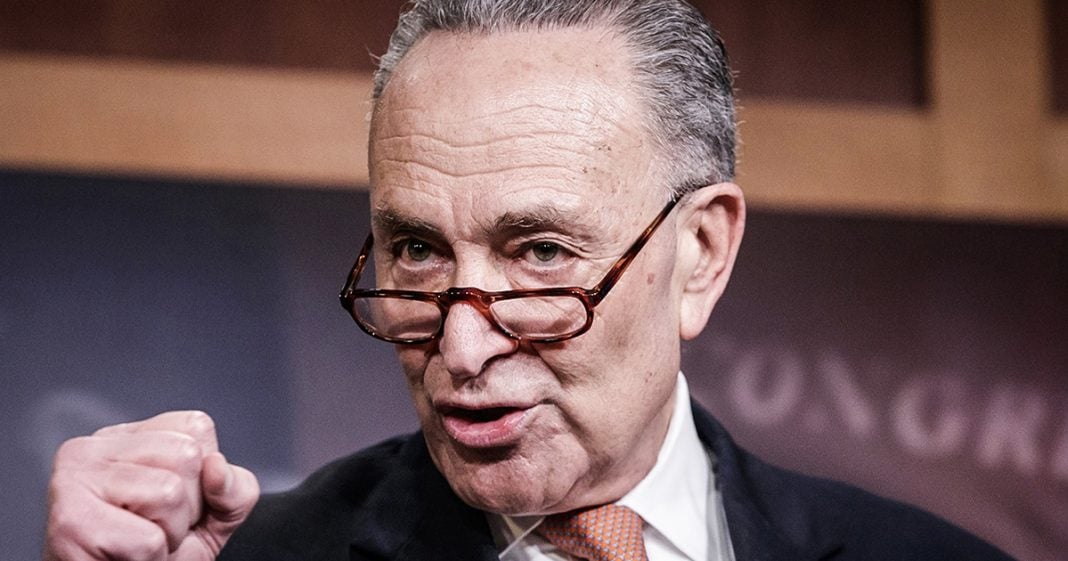 Senate Minority Leader Chuck Schumer has told reporters that he is willing to give Donald Trump $1.6 billion for his border wall, in exchange for absolutely nothing. Schumer represents everything that is wrong with the Democratic Party, and this isn’t the first time that he’s sold out the country and the future to appease Republicans. Chuck has to go, as Ring of Fire’s Farron Cousins explains.

Democratic Senate, minority leader, Chuck Schumer is trying really hard to prove to the country that he is the worst Democrat in the United States of America. Yesterday Chuck Schumer told reporters that he was absolutely a going to give Donald Trump one point $6,000,000,000 for border security. Now, it was originally reported that Schumer was going to give one point $6 million for the border wall, but he later clarified said, no, no, no, no. This is border security. You know, we’re not talking about a concrete wall. We’re not talking about more detention facilities. We’re just going to give them one point $6,000,000,000 for border security and and Trump better not break that deal and use it for those other things that I just said. We’re not giving him money for chuck. You are an absolute sell out, not just to the Democratic Party. You sold them out long ago. You are a sell out to the American people.

You know damn well that Donald Trump is not going to use that one point $6, billion dollars for what you tell him to use it for. He is going to use it for whatever the hell he wants to use it for. If he wants to use it to construct a wall, he’s going to do that. If he wants to use it to make more child cages, he’s going to do that and you tweeting out a clarification isn’t going to stop Trump from doing whatever he wants to with that money that you needlessly gave him because you are so weak and spineless that you won’t stand up to the man who has a 38 percent approval rating. That’s what we’re talking about here. Trump is still the least popular American president at this point in his presidency that we’ve ever had and Schumer even after that big democratic wave in the midterms is still too terrified to stand up for this man or stand up to him.

Stand up for the American Public Schumer’s got to go. He’s got to. Go yesterday. There needs to be some serious movement within the Democratic Party itself to remove Chuck Schumer from his leadership position because there is nothing leaderly about Chuck Schumer. He is a coward. He is spineless. He is weak and he represents every single thing that is wrong with the Democratic Party today. We have newly elected members in the US House of Representatives who haven’t even been sworn yet, who are pulling the party to the left where it needs to go. They’re working on a green new deal. They’re working on other proposals that are hugely progressive and hugely supported by a wide variety of the American public majorities of Republicans and Democrats. Meanwhile, Chuck Schumer over there in the Senate. The leader of the Democrats is pushing them further to the right, giving Donald Trump everything he wants, giving him one point $6 million for his border wall because that’s what it’s going to be spent on.

Regardless of what Schumer says. Gave him a dozen judges a few months ago because Schumer wanted to go home for a long weekend. I don’t want to stay. I don’t want to fight. I’m going to give you these judges, so can I please go home now? That’s Chuck Schumer. That is Chuck Schumer and he is the face of the Democratic Party right now, and if you’re a card carrying Democrat and you’re okay with Chuck Schumer Rolling over and showing his belly anytime there’s a fight to be had, then you need to seriously think about where this party is headed because under Chuck Schumer, it’s headed to the center and once it hits that center, it’s headed down the toilet. That’s where Chuck Schumer’s taken the Democratic Party. But if you want a party that’s not afraid to fight back a party that’s not afraid to get substantive on the issue, then you have to agree that Chuck Schumer has outlived it’s usefulness and it’s time for him to go.