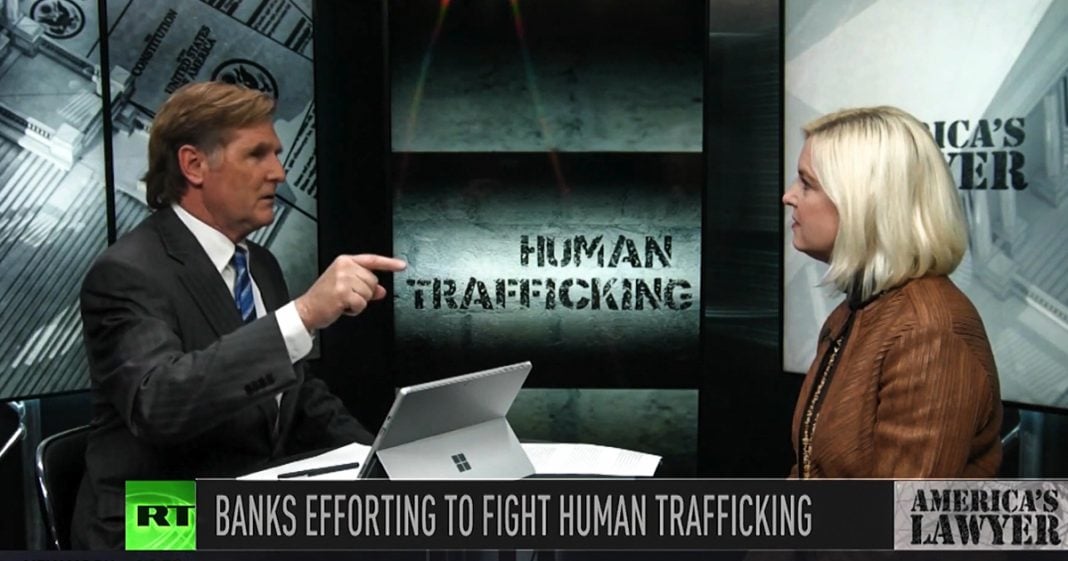 Via America’s Lawyer: Mike Papantonio has a discussion with Legal Journalist Mollye Barrows on how banks are joining the fight against human trafficking.

Mike Papantonio: Banks are joining the fight against human trafficking in international business that generates tens of billions of dollars. Banks are in a unique position to track these traffickers by monitoring suspicious financial transactions. Legal journalist, Mollye Barrows joins me to talk about this. As you know, uh, Mollye, we’re, we’re launching a human trafficking litigation, uh, organization in United States.

Mike Papantonio: That just is just completely devoted to following human trafficking and prosecuting people involved, not people but corporations.

Mollye Barrows: The platforms where they advertise.

Mike Papantonio: The platforms. For example, the first big, I think really big case. It was launched in, in Texas against the truck stop industry where they. I think it’s a $43 billion industry and it’s all over the country. And they moved these girls from, from truck stop to truck stop.

Mike Papantonio: It’s a total nightmare. So here, it’s, it’s an amazing thing. We’ve talked about using the banks as an avenue to go after because they know what they’re, they know exactly what’s going on. We launched the case, as you know, against, on hit, on, on terrorism. And we said the banks, we found out the banks were washing money for terrorists. They admitted it is not. We weren’t. Wasn’t a guesswork.

Mike Papantonio: They admitted it. They signed the document. This is the same thing, isn’t it?

Mollye Barrows: It’s all about the money. It’s always about following the money and when you follow the money you’re going to find the trafficer. Just like you find the terrorist, just like you find the other bad guys that you’re looking for because it’s usually about following the money and that’s exactly what’s happening here. So most recently the financial action task force, which was created by the G7 some years ago in Paris, has been monitoring human trafficking for some time and basically as a lot of financial analysts know, unfortunately the illegal, illicit criminal world of human trafficking is just an extremely lucrative business. It has grown in the past seven years according to FATF from a $32 billion a year industry to a $150 billion a year. So what happens to that illegally gained money. It needs to be laundered.

Mollye Barrows: Right, they’re not sticking up in the mattress.

Mike Papantonio: And what we found that, what we’re finding in the terrorism business where we, we know, I mean, you’ve got these, these banks admitting it.

Mollye Barrows: They see the transactions.

Mike Papantonio: And even after admitting it, there was no prosecution from the DOJ. Biggest banks in the world…

Mollye Barrows: They must be benefiting somehow.

Mike Papantonio: Oh yeah. Yeah, must be. We know who’s benefiting, the banks and the politicians. But the point is the Department of Justice actually had them sign a document; in the document, the banks. we’re talking, uh, we’re talking about the fact that yes, we are laundering money. Next, we do know that it has an impact on human lives are lost because of it. Yes. We know that it’s a terrorist organization. Even with all that Holder’s, Department of Justice did not prosecute one person.

Mike Papantonio: So this is the same thing. They got away with it there. Now they’re saying there’s $100 billion out there. We can make a lot of money by washing these dollars. I mean, that’s exactly what’s occuring here.

Mollye Barrows: That’s exactly what it is. And so I think you have agencies like FATF as well as some US law enforcement agencies who going back as much as a decade ago had been utilizing partnerships with certain banks and in the US it’s JP MorganChase, Citibank, among others that basically they say, hey, we have some red flag indicators that tell us somebody could possibly be laundering money as a result that was made as a result of human trafficking. These are the things we want you to look for. Will you let us know? And they have been doing that. It’s been an effective partnership.

Canada in 2016 launched a financial watchdog group based on the testimony of listening to the victims of human trafficking and how everything from different levels of it just your base pimp, if you will, with maybe a handful of girls to entire networks and trafficking rings and they were listening to these victims come forward and say, I was making all this money of course on behalf of, of what they were doing to me with threats and coercion. And then they would take my money and put it into deposit late at night. So basically they gave them all these different red flag indicators of small, then criminal organizations and large ones and the bank started to work together. I mean hundreds of tips about coming to police.

Mike Papantonio: Well the banks did not work together.

Mollye Barrows: Well in this particular case they did, you’re right. But in general not always.

Mike Papantonio: But in terrorism they didn’t work together because they were making so much money.

Mike Papantonio: And they only came and said, oh, we want to help. After they were caught.

Mollye Barrows: Yes, I’m with you on that.

Mike Papantonio: After, after they were caught, they started saying, well, maybe we should do, sue somebody… Let’s see. We’ve made $50 billion. Maybe we’ve made enough money. Now we can start
being the good guy.

Mollye Barrows: We can feed a few bad guys.

Mike Papantonio: Exactly. We’re going to feed some low in management people in, and by the way, did not even get prosecuted there. Molly, thanks for joining me. Okay.