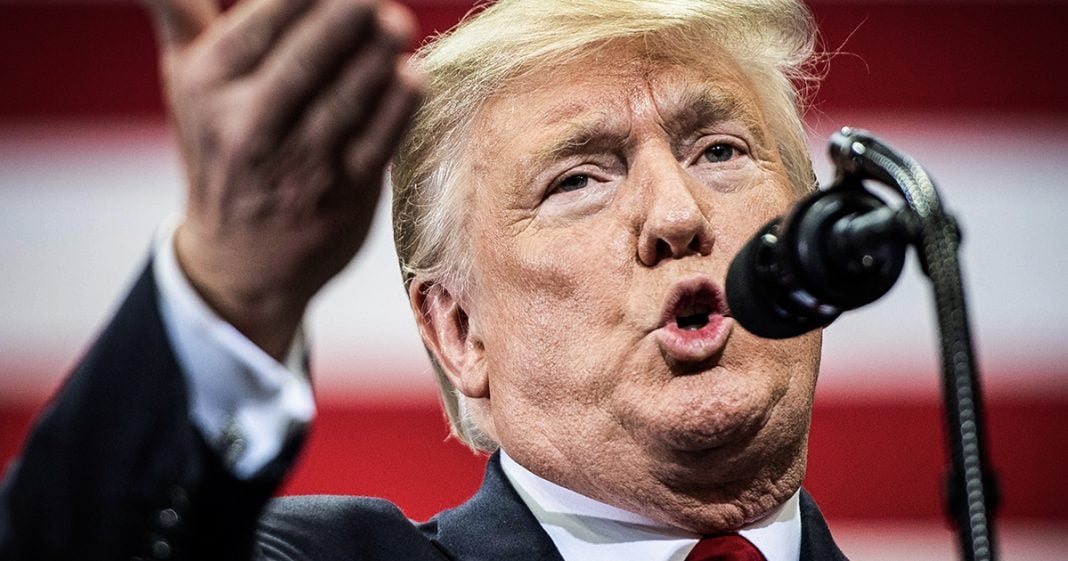 Donald Trump’s hatred of the media may have finally reached a tipping point as he’s tweeted out an idea to create a state-run media network to show the rest of the world how great he really is. This man’s narcissism and stupidity are a threat to our country, and if he wants better media coverage than maybe he should try doing something decent for a change. Ring of Fire’s Farron Cousins discusses this.

Everybody knows the Donald Trump hates the media with the exception of Fox News, of course, but he hates the media because they’re always so darn mean to him, and he makes sure that anytime he gets his little bitty feelings hurt by the media, that he gets on twitter and attacks them and lets us all know how sad and depressed he truly is, that the media is not being nice to him because he hasn’t done anything worthy of being nice about. So yesterday on twitter, Donald Trump came up with the brilliant idea. Maybe we should just create a state run propaganda outlet to show the world how great Donald Trump truly is. Here is what Donald Trump tweeted over a series of tweets. While CNN doesn’t do great in the United States based on ratings outside of the US, they have very little competition throughout the world. CNN has a powerful voice portraying the United States in an unfair and false way.

Something has to be done, including the possibility of the United States starting our own worldwide network to show the world the way we really are. Great. Um, okay. First and foremost, aside from this being a ridiculously stupid idea, there actually already is a state run media outlet. It’s called Voice of America. Uh, the government funds it to the tune of about $220,000,000 every single year. So we already have what you’re talking about Donald trump. The problem is their coverage of you is also not completely, uh, you know, great. Why? Because they’re talking about what’s actually happening in this country. So if you wanted to start a different worldwide network, as you call it, to show the United States the rest of the world, actually how great that United States is. What are you going to talk about? You can talk about the fact that we have people who are dying because they can’t afford prescription drugs.

Is that what you’re going to show them? What exactly do you want your worldwide network to show? Donald? Tell us. Tell us what this programming is going to be. Because I can promise you, if you want to show the rest of the world what America is really like, all it’s going to do is lower their opinion of us here in the United States. We are running out of things to be proud of right now. Again, people are dying because they can’t afford their prescription drugs. We have an administration. You Mr Trump, who says that climate change doesn’t exist. We have Republicans in Congress who in spite of the massive climate change report, we just got say it doesn’t exist. You are out there insulting the state of California after they suffered the deadliest wildfire in the state’s history. You neglected Puerto Rico after Hurricane Maria just left them to die.

You’re pretty much doing the same thing to all the other hurricanes that have hit along the coast. Luckily here we’ve had enough good citizens come forward and volunteer their time and efforts and money to help rebuild the areas in the United States hit by hurricanes. A lot of those actually came from NFL sports teams, which you claim to hate so much. They’re the ones out there doing real work. You know a Tampa Bay buccaneers, the Houston Texans, with Jj Watt after Harvey, you got the Carolina Panthers after the hurricane struck up there this year. They’re out there helping people. What are you doing? You’re playing golf. You’re ignoring problems. You have a horrible disaster response on hand, ready to go anytime something bad happens in this country, so you don’t really want the rest of the world to see what all of us here in the United States are seeing every single day. Because I can promise you if they truly understood what was happening here, they would hate us even more than they already do.