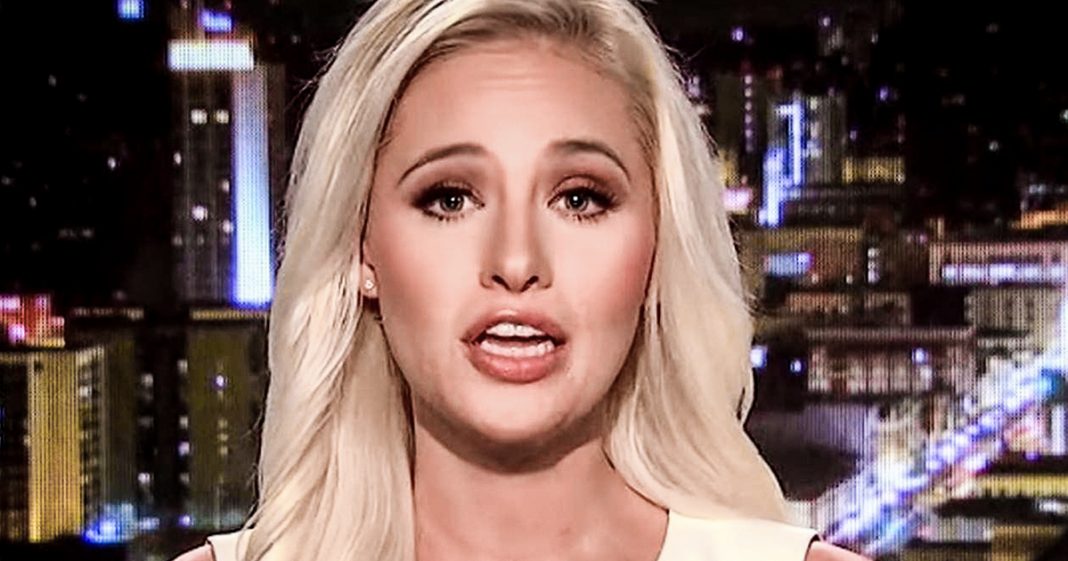 Right wing hate talker Tomi Lahren has outdone herself once again by claiming that the US “defending” its borders was the “highlight” of her Thanksgiving weekend. What she’s saying is that the images of children and families being tear gassed brought her tons of joy, probably the only joy that this woman has felt in years. Something is clinically wrong with Tomi, either that or she’s putting on one hell of a performance. Ring of Fire’s Farron Cousins discusses this.

On Monday, Fox News Contributor Tomi Lahren decided to take to twitter to let us all know what a great thanksgiving weekend she had. Here is what Tomi tweeted out, bum rushing the border is a choice and has consequences. Watching the USA finally defend our borders was the highlight of my Thanksgiving weekend. So the highlight of this little hate mongers weekend was watching women and children choking on tear gas fired by border patrol agents from the United States into Mexico. That was the highlight of this woman’s Thanksgiving weekend because according to her we’re finally defending our borders. You know, I know Tomi is not an intelligent human being, but I, I sincerely want to know when were we not. I mean, up until trump came into office, did we just not have borders and just whoever wanted to could, could come across and borders didn’t exist and there was no border patrol.

There was no ice, nothing. All of that came from Donald Trump or have we always done it? It’s just that you are more comfortable expressing your hatred towards the others in public than you were a few years ago. Because I think that’s really what you’re trying to say here. Tell me. Here’s the thing. I, I have lots of things to say about Tomi first and foremost. I find it hard to believe that somebody can be this openly, just hateful, you know, complete lack of any kind of humanity or empathy or any normal human emotion. I feel like this is an act. I feel like Tomi is just trying to say the most outrageous thing she possibly can to get a little bit more air time. And the reason I say that is because that’s what happened many years ago, probably about 13, 14 years ago when you had your queens of right wing hate talk, Ann Coulter and Michelle Malkin, uh, Laura Ingram who now has a show on Fox, but at the time they were all trying to vie to be the queen of hate.

So they had to each come out and say the most crazy and outlandish and outrageous in hateful thing possible so that they could get the spotlight and the other ones wouldn’t. They were all vying for that top spot. And I feel like that’s what Tomi doing right now. She is trying to take the spotlight off the other little hatemongers out there. The Charlie Kirk’s, the uh, uh, Ben Shapiro’s, the Candice Owens. Those folks, she’s got to stay relevant because they all have a shelf life. And that’s my favorite part about all this. No matter how horrible these disgusting little pricks are, they all have a shelf life and it’s running out pretty damn quick. There is going to come a time within the next probably three to four years when everybody’s forgotten who she is. Everybody will have forgotten Ben Shapiro and Charlie Kirk and Candice Owens. Why? Because I’ve been doing this long enough to see people like this come and go from the right all the time.

Tomi Lahren is not going to be spewing her brand of hatred five years from now or if she is, nobody’s going to be paying attention anymore because there’s going to be a new curator, more hateful little woman who comes up in her place and says even more viral things but has even a more attractive look. Then Tomi and then Tony is going to be tossed to the curb. That is what happens, but again, I can’t help but wonder what is wrong with this particular woman, Tomi Lahren. I was she not loved enough as a child. Did nobody ever hug her. I eat to have no empathy whatsoever is truly a sociopathic trait and I fully believe Tomi Lahren is a sociopath. She is unable to have normal human emotions. There is something clinically wrong with her unless of course, as I mentioned, this is a complete act in which case go ahead and hand this woman and Oscar because she has pulled off the role of right wing.

Hate troll better than anyone I have ever seen, but again, it’s not going to last and Tomi can get out there and say all these outrageous things. Go to bed at night wondering what the hell she’s going to do with the rest of her life. Crying herself to sleep because she knows her 15 minutes of fame are almost over and that is the best part of this story. So no matter how hateful she gets, no matter how disgusting she is, no matter how often she shows us that she really has no soul, you can always take solace in knowing that she’s not going to be around forever and eventually she’s going to be faced with the reality that she spent her golden years of her youth hating everyone. And now is unemployable to anyone.