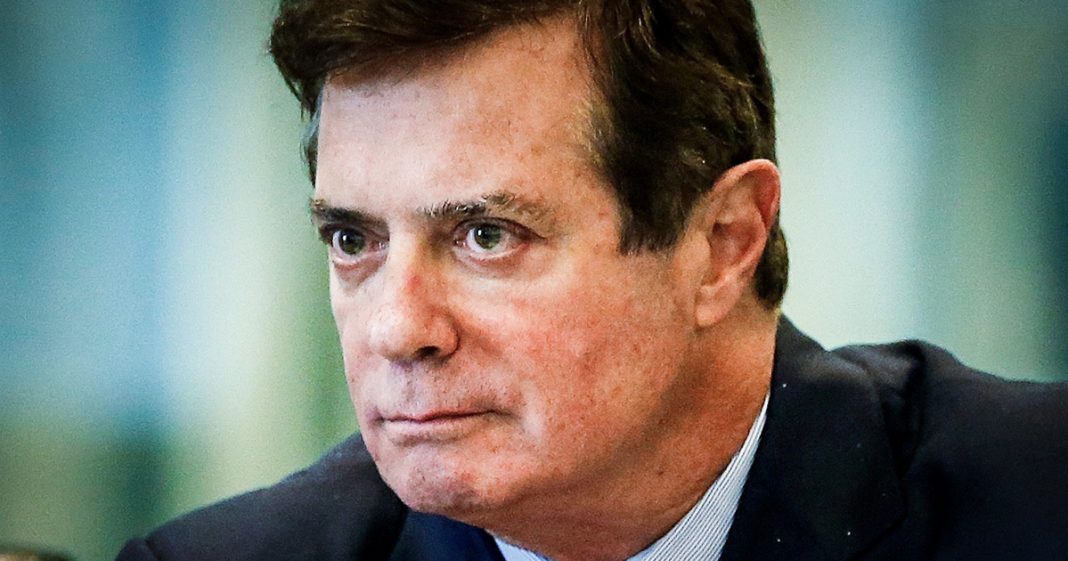 Paul Manafort’s sweetheart plea deal that he arranged with special prosecutor Robert Mueller’s office might be null and void now that Mueller says Manafort has been lying to both the FBI and prosecutors. What’s interesting about this new development is that Mueller’s team is able to figure out who is lying and who is not, which means they likely have far more information than most people realize. Ring of Fire’s Farron Cousins discusses this.

Yesterday, it was announced by the Special Prosecutor’s office that Paul Manafort has been lying to the FBI and to people within Robert Mueller’s office and therefore they are trying to partially revoke his plea deal and run him straight to sentencing for the crimes that he already pleaded guilty to. Paul Manafort, the guy who was out on bail for quite a while, but then he got busted for witness tampering, so then he got sent to jail. Then he was trying to cooperate more. Now it turns out he’s been lying to prosecutors this whole time. He is now going to be headed to prison and I don’t think they’re going to take it very lightly when they come to the sentencing part. When you consider all of the crimes basically that Manafort has done since pleading guilty and I’m not even talking about the crimes he pleaded guilty to. I’m talking about all of the crap that he pulled after he agreed to cooperate.

This guy literally can’t stop breaking the law. He can’t. There is something pathologically wrong with him and he needs to spend a few decades in prison thinking about what a horrible piece of crap he truly is, but that’s actually just a small part of this story, right? Okay. Paul Manafort’s going to be heading to sentencing has been lying to prosecutors, but that’s the thing. How do they know he’s been lying? They know he’s lying. He says he wasn’t, but they have the evidence to show that he was so. How do they know and that’s the part we should all be very interested in because it means that the special prosecutor’s office, this entire investigation has gathered more evidence than we even realize because if they’re able to take the statements being made to them by Paul Manafort, run them against the other evidence and prove that Manafort is lying, then they have a hell of a lot more than what we thought and Manafort obviously wasn’t necessarily needed, so his plea deal is not needed.

It’s null and void at this point in, this guy’s going to go do some serious time in prison. Assuming Donald Trump doesn’t pardoned him, which is very likely to actually happen, but we all need to take a deep breath, exhale a sigh of relief, and understand that this investigation has more info tucked away, more evidence tucked away than any of us realize if they’re able to verify or confirm a lie that someone is telling them that doesn’t bode well for Donald Trump. What they’re trying to do is build a case, possibly obstruction, possibly perjury, possibly collusion, possibly financial crimes, which if you asked me is probably where you’re going to find your actual evidence of criminal activity. That was part of what Manafort was involved in. He was also involved in that trump tower meeting. So what was he lying about? That’s the part we don’t know, because if we knew what he was lying about, we would be able to say with confidence that Mueller’s team has evidence that something happened again and unfortunately we won’t know until the final report comes out.

Mueller team did say that they’re going to release more information later down the road in terms of Manafort’s lying, but they have enough evidence to show that he’s lying to reneg on his, uh, a plea deal and send them to sentencing. So that is toast with the exception of a possible presidential pardon, but it just begs the question and it makes all of us a little more, you know, antsy to know what kind of information they have that was able to show that Paul Manafort, even after given the sweetheart deal and multiple second chances to prove that he was lying and finally say, we’ve had enough of this guy, get him in prison right away. This final report is going to be fun to read. It’s going to be fun to see the administration’s crazy reaction and hopefully, depending on what this final report says, it’s going to be a lot of fun to watch those impeachment hearings.