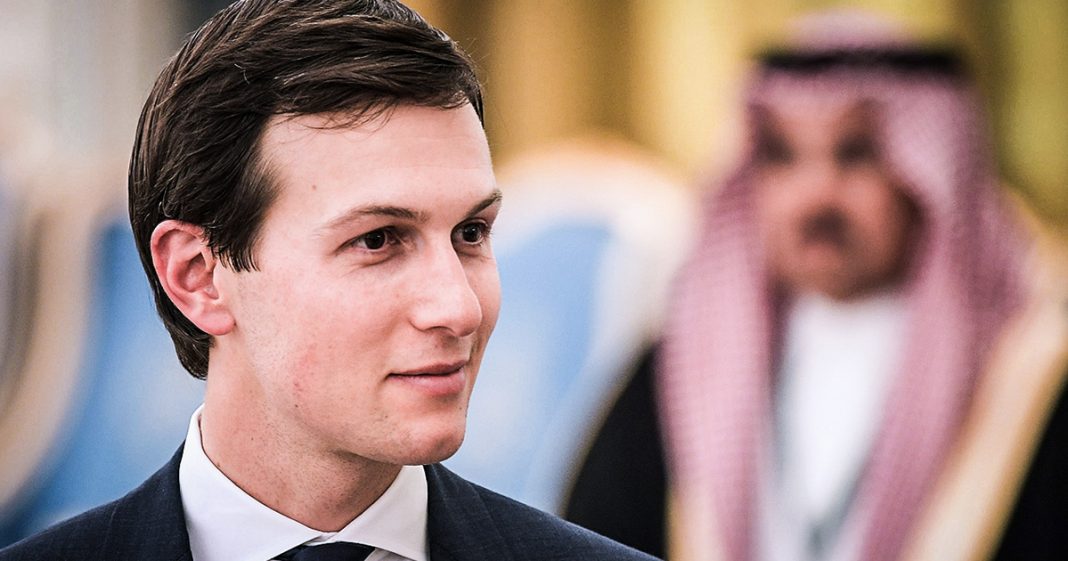 According to new reports, Trump son-in-law Jared Kushner was pushing the Pentagon to inflate an arms deal with Saudi Arabia to close to $110 billion, far more than the original deal worked out between the two countries. Kushner is solidly in the pocket of the Saudis, and as long as they keep funneling money to both the Trump family and the arms industry, they can, quite literally, get away with murder. Ring of Fire’s Farron Cousins discusses this.

Somebody needs to warn Ivanka Trump that her husband is in love with someone else and that someone else actually happens to be an entire country. The country of Saudi Arabia, Jared Kushner is 100 percent in the pocket of the Saudis and we know that based on the report that came out yesterday showing that Jared Kushner actually tried to inflate an arms deal with Saudi Arabia to $110,000,000,000. See initially the Pentagon was trying to sell about $15,000,000,000 worth of weapons to the Saudi regime and then Jared Kushner back in 2017 when over there. Met with them, had a wonderful time and he said, quote, we need to sell them as much as possible. That was in May of 2017. We need to sell them as much as possible, and then he went to work trying to convince the Pentagon to up the deal from $15, billion to $110,000,000,000 worth of arms and weapons and tanks and jets and all kinds of things that the Saudis will then use to start killing everyone around them.

Now, this deal did not quite come to fruition, at least not yet, but it’s still could. The Trump administration is actually hoping to sell about $400, billion dollars worth of weapons to Saudi Arabia according to reports, a report by ABC News actually, but nonetheless, this little thing with Kushner being in love with the Saudis and trying to sell them as many weapons as possible, his words, it also helps to show us why Donald Trump refuses to do anything about this regime. After it was confirmed by our own CIA that they killed, they killed the journalist and Trump says, well, we can’t really do anything. Maybe they did, maybe they didn’t, but we’ve got such a good financial relationship with them that, hey, is one life worth ending over? Hell no. It is not just his life, not just Khashoggi, but every single life that Saudi Arabia has taken in the countries around them, in Yemen.

You know those buses full of children that they just keep killing. That’s worth ending these arms deals. They’re killing those people with American made weapons. Yeah. That’s not worth it. Nothing with our relationship with Saudi Arabia is worth it, not even the oil. You know. Why do you know where most of the oil in the United States comes from? Canada. It comes from Canada, not Saudi Arabia. Hell, we get a lot of it from Mexico to those two countries combined make up over 60 percent of the imports of oil here in the United States are our two neighbors, north and south. That’s where we get most of our oil and yet Saudi Arabia, who Trump is saying is hard deal with them, is help lower gas prices. That’s not true whatsoever. They’re an oil cartel. They’re a blood thirsty dictatorial regime and we need to cut all ties with them and put harder sanctions on them than we have ever put on any country in the history of sanctions.

They are disgusting. We do not need a relationship with them. We do not need an alliance with them. They are not our friends. The first opportunity they get, they will use those weapons against us to stab us right in the back, but the Trump administration doesn’t care about that. All they see are dollar signs, like when Trump said a year or so ago that they buy a lot of condos from him. Forty to $50, million dollars worth Jared Kushner secretly meeting with them. Actually during the 2016 presidential campaign. You want to find collusion. Maybe focus a little less on Russia. Go focus more on Saudi Arabia and the UAE. We know that those meetings took place. We know that Erik Prince, blackwater, founder of the prior private mercenary from. We know that he helped arrange those. We also know that he’s, uh, been snared up and Robert Mueller’s investigation as well. There are things happening here between this administration and Saudi Arabia that need to be brought to light. There is something shady going on here. And at the heart of all of it is Jared Kushner.