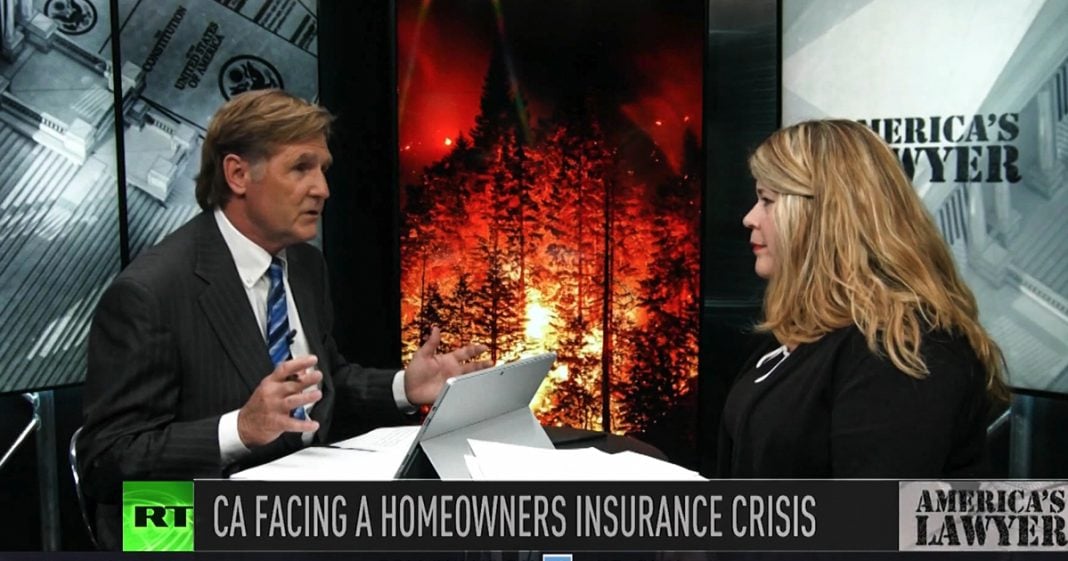 Via America’s Lawyer: Mike Papantonio is joined by Attorney Kim Adams to discuss how the deadliest wildfires in California’s history are making millions face an insurance crisis.

Mike Papantonio: Hurricane season is winding down in hundreds of thousands of people in the U.S. Are still reeling from this year’s disasters and on the west coast that people are losing everything to massive wildfires that continue to rage out of control. Homeowners that have experienced natural disasters might be in for another disaster when they go to talk to their insurance companies. And I’m joined now by attorney Kim Adams to tell us what’s happening. Kim, you’ve handled hundreds and hundreds of these types of cases for hurricane victims and it’s the same analysis that we’re going to see in California. What, what is it that most people really don’t get where it comes to this problem of insurance.

Kim Adams: So I think what most people don’t get is they don’t read their policy. They don’t understand their policy and they don’t realize that the language in their policy is going to severely limit their ability to make a recovery. Um, I think one of the most important things that people miss from their policy, we can kind of get into a lot of the nuances with the language, but they miss how long; if you lose your home and you need to, you’re displaced with your family when you need to be able to afford to uproot and move to a place to live in and people don’t realize that either their coverage doesn’t cover that at all or it’s limited in the amount of coverage or thirdly that their insurance carriers not telling them the truth about what they’re entitled to.

Mike Papantonio: Yeah. Okay. So, so what actually is more involved even in that, because you’re typically only have what, 24 months. Is that a typical kind of a.

Kim Adams: Well, not even that.

Mike Papantonio: Yeah, I’ve seen them as low as six months that you have to react. Somebody reading a policy and really putting some demands on the policy is going to say I want 24 months, it’s going to cost a little bit more, but even 24 months might not be enough because you’re displaced, right? Then you have to build a home and to build a, you know you’re displaced, couldn’t be as much as a year. Then you’re having to build a home. Very seldom are you going to be able to build it in that year. So that problem comes up. Now here, let’s add to this. California insurance industry in California last $16 to $18 billion last year, right? They, this is an industry that they’re not used to paying money out there. They’re actuarials tell them we need to make more money and we make it by holding onto it. So right now more than ever, we’re going to see these insurance companies fighting every dime in California because for four years they’ve had billion dollar losses.

Kim Adams: Oh yeah. Clearly. And you know, to go back to your point, 7,000 dwellings have been lost in some of these fires in one year and so to have anyone think that they’re going to be able to rebuild in 12 months, 24 months, even 36 months is kind of outstanding to even think that that could happen. But you know, go ahead.

Mike Papantonio: Well, I mean, isn’t part of it, Kim, that you, somebody wants to sell you a policy. Your initial thought is, let me buy the least expensive policy until this happens. You know, and then you say, Oh my God, let me read it now, and so, we’re living in a time whether you’re living on the coast, whether you’re living in this remarkable area around California that you every reason to want to live there, but if you’re making that choice, make sure that you, you don’t cut corners where it comes to insurance. It’s going to cost you more, but if you want to live there, if you, unless if you choose to move away because you’re worried about that, it’s one thing, but if you want to live there, you can’t really make that decision without saying, I’ve got to pay a lot more for my insurance than I use to.

Kim Adams: Right. So tips, you need to make sure that you have a broker or an agent that you can trust as well established. So you can go over some of these concerns. There’s a ton of things people don’t think about or…

Mike Papantonio: What are a few more? I mean, the thing of being displaced is huge.

Kim Adams: So I think that definitions and how, you know with hurricanes for instance here on the coast, people don’t understand the difference between wind flood and who needs an extra flood coverage even if you don’t live in a flood zone and storm surges. And I think that it’s important to make sure those things require extra riders. A lot of times extra money. And so right now when people read their policies, I’m sure they’re seeing the exclusions, we’re going to exclude this kind of flood insurance and they’re not understanding the difference.

Mike Papantonio: Well with fires, we’re going to see a ton of exclusions. It’s going to be, if you’re in this area, they have history now. We understand that climate change is real. People have been able to live up there. They fought, they’ve had to fight this on and off for a long, long time. But not like this. This is a, this is a new abnormal. And so, uh, let me just put one more thing. I see where a PG&E is brought into it. PG&E will go bankrupt.

Mike Papantonio: I promise you either PG&E and I will go bankrupt if they have to pay for this or legislator will give them some kind of immunity. What’s your take? I got about you got about 30 seconds.

Kim Adams: Yeah. I think the anticipated liability for PG&E. $17 billion, you’re right, they will go bankrupt. Fema, you’ve got federal government, you have politicians in Washington who have never experienced. Some of these disasters, are saying it’s the state’s fault and we’re not going to give you additional funding. And so I think that, you know, we’re only option is litigation against the insurers. We have to be careful to make sure that they don’t pull coverage altogether and we have to make sure that people that can’t afford it are, you know, given some recourse.

Mike Papantonio: Right. Kim, thanks for joining me.