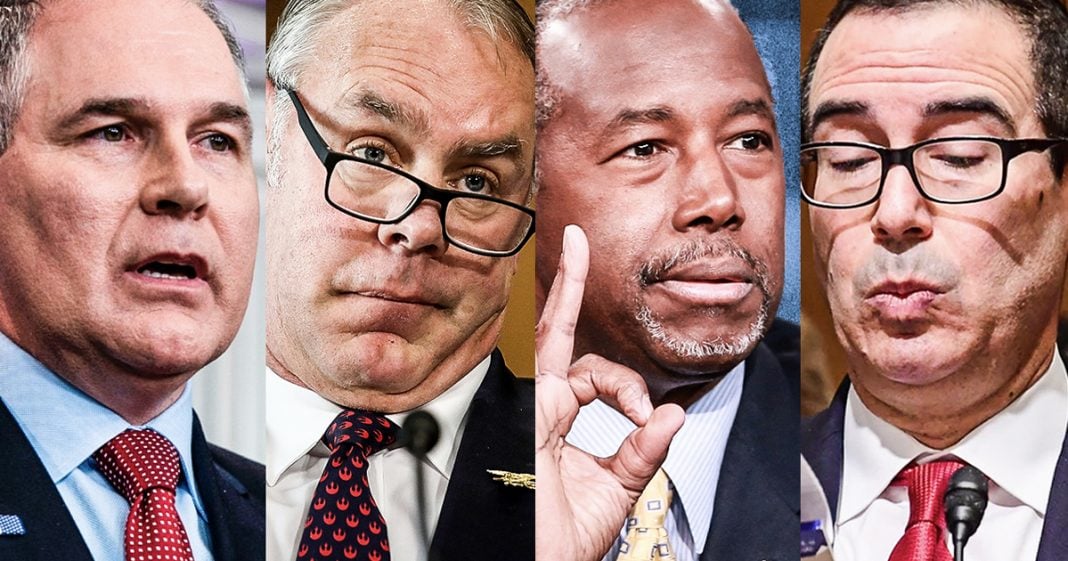 From the EPA to the Department of Interior, and from Housing and Urban Development to the Treasury, the people that Trump put in place to run federal agencies just can’t seem to stop themselves from breaking the law. The level of corruption and incompetence that we’ve witnessed from the Trump administration truly is unprecedented, and the investigations and scandals just continue to pile up. Ring of Fire’s Farron Cousins discusses this.

Recently and EPA official from Donald Trump’s EPA was actually arrested in the state of Alabama. I’m part of a scheme that he had arranged allegedly to help a coal company avoid having to clean up some of their toxic waste. He was arrested, put in handcuffs, and taken to jail where he was then released later on $30,000 bond. Now, the reason that story is important is because it just highlights how corrupt and incompetent everyone in this trump administration truly is. News Day recently did a phenomenal article about all of the investigations and all of the scandals that have plagued every single member of Donald Trump’s cabinet. I mean, between Scott Pruitt, Andrew Wheeler at the EPA, Ryan Zinke at the Interior Department, Steven Mnuchin at the treasury. Uh, Wilbur Ross has commerce secretary Betsy DeVos at the Department of Education and Ben Carson at Hud. Every single one of them has been involved in at least one scandal, one impropriety.

Uh, well, improper activity I should say. Excuse me. So why, why are we allowing this to continue? Is the big question. I mean, who out there actually believes Donald Trump is still trying to drain the swamp? That’s a question I would love to see answered. I would love any right wing are out there to send me a message and explain how exactly trump has drained the swamp because the level of corruption we have seen in this government has not been seen throughout my entire lifetime. There are more scandals, more investigations, more lawsuits involving Donald Trump’s cabinets. Then we have seen in modern history, the man didn’t drain the swamp. He refilled it. This is a level of corruption that is to date on precedented. Let’s go through a few of them. We, let’s start with Betsy DeVos, who’s currently being sued because she stood to gain by loosening the rules for a student loan borrowers, uh, and for profit colleges, of which she has a financial stake in.

Of course, Ben Carson, his scandal was probably the most talked about, uh, his. One of the things, you know, buying the 35, $40,000 China set for his office at HUD. And to be honest, I have to point this out a little bit. The reason everybody knew about Ben Carson’s thing, he had to go and testify in front of Congress about why he bought these things. He throw his wife under the bus. He said she picked it out so you know, that’s, that’s what happened. And the guy has no morals and no, you know, courage whatsoever immediately through his wife under the bus on that. But I have to say most people don’t understand Betsy DeVos is scandalous or Zinke scandals, scandals or even Wilbur Ross, the scandals, but they all know about Carson’s and honestly I kind of feel like it has to do with the color of his skin.

I feel like Carson, who’s scandal is probably the most mild got chosen out of all of them to be the whipping boy because of the color of his skin. I mean you’ve got Mnuchin who should be in prison for what he did during the subprime lending crisis, but instead he’s taken private jets. He’s sitting on the top of Fort Knox watching eclipses and yet we’re having congressional hearings about Ben Carson’s dinner plates. I mean, come on, you have to admit there has to be something showing why we’re going after Ben Carson so fiercely, but not Mnuchin or or even Zinke who is now under an even larger investigation for approving a land deal from which he profited while being in office. Zinke also took 66 vacation days in just first 18 months in office. I’ve been here 15 years and I haven’t taken 66 vacation days since I started. This dude hits it in 18 months. The bottom line is this. There are a lot of scandals involving this trump administration and anyone who believes that Donald Trump is actually draining the swamp needs to go have their head examined because they’re clearly not paying any attention to what’s actually happening in the real world.