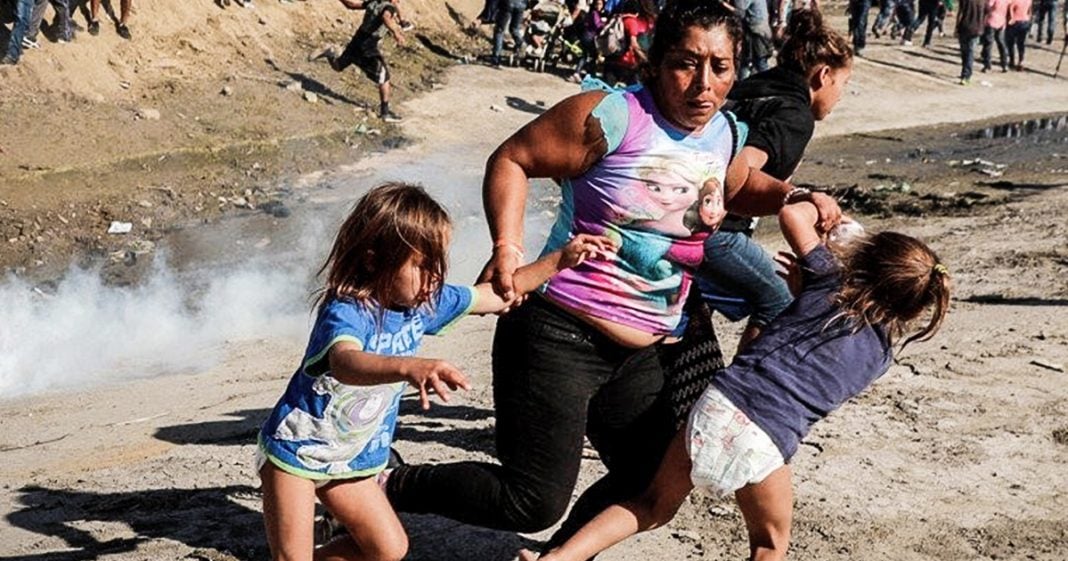 The US government has had a month to figure out how to handle the “migrant caravan” headed towards our border, and as the first refugees arrived this weekend, the only thing that border patrol agents could think to do was fire tear gas at them. The images of the gassing victims will be shown in history books as the lowest point of the 21st Century so far, and the crimes against humanity being carried out by the United States need to be investigated and punished. Ring of Fire’s Farron Cousins discusses this.

Over the weekend, agents for the US Customs and border patrol began shooting canisters of tear gas from the United States border into Mexico, targeting women, children, toddlers, infants, and everyone else in those areas. A lot of the right wing responses that we have seen from this is that it’s not the women and children. Those are very few in that massive crowd. Most of this is angry men coming to the United States because they hate President Trump and they hate the United States. So they’re coming here according to right wingers on, uh, social media. Um, first of all, no truth to that whatsoever. You can see the pictures for yourself. We’ve all seen them. They’ve been going around social media. They’ve been shown on the corporate media. We see children screaming

after getting tear gassed by US Customs and border patrol agents. There’s no denying what’s happening. The evidence is there. The pictures are there. We know what the United States is doing and it’s borderline a war crime to be using these chemical agents against a civilian population. I mean hell, even if we were at war, it would be illegal to use these under the Geneva protocols, but that hasn’t stopped our border agents from shooting these things at women and children. I mean, you know, you think of the picture, the little girl, they’re screaming, she doesn’t even have shoes on. She doesn’t even have pants on. The mom is wearing what is obviously one of the child’s shirts because they don’t even have enough clothing and we’re tear gassing them.

In my lifetime, 35 years, I’ve never seen anything like this from the United States on our own soil. I know we’ve committed some horrible atrocities overseas. I’ve seen the photographs from Abu Ghraib and all the torture that went on there, but I never thought I’d be in a situation where I would see it come home, but it has. We have in my lifetime, and I know things have been worse in this country, but we’ve hit a rock bottom. We have not been this low as a country since I was born. We haven’t been this low as a country since segregation or slavery, but that’s where we’re at right now. We are gassing children. Trump has closed the border illegally. By the way. He does not have the authority to do that and we’re committing war crimes were committing crimes against humanity. These are the kinds of things that if somebody else was doing this in another country, we wouldn’t hesitate to go invade them.

I mean, it wasn’t. One of the big things with Saddam Hussein was that he was using chemical weapons against his own people and here we are using chemical weapons because that is what tear gas is classified as. We’re using chemical weapons against children who are legally seeking asylum. They have not done anything illegal. Now, according to some of the border patrol agents, they were throwing a quote project tiles. So you think that a, a child, you know, even a teenager thrown a couple rocks are a few sticks. I mean, that’s a reason to gas them and burned their lungs and burn their eyes and mouths and noses and everything else because you got hit when you’re in full riot gear with a small rock. This is insanity. This is a police state and this is the lowest that I’ve ever seen this country hit in my lifetime and honest to God.

I don’t know if there’s any coming back from this, the way the right wingers are defending. This tells me that this is not going to stop. Somebody needs to be held accountable for this and not the just the people on the ground shooting these canisters. Yes, they should be tried for war crimes and they absolutely could be under the Geneva protocols. Again, we signed into that and they’re still doing it. Any soldier that participates in that, even if they’re just following orders, is guilty, but so are all of the ones at the top who made the decisions. There needs to be investigations, there needs to be prison sentences, and we need to show the rest of the world that we’re not as gross and dirty and deplorable as we’re coming across in these recent media reports.