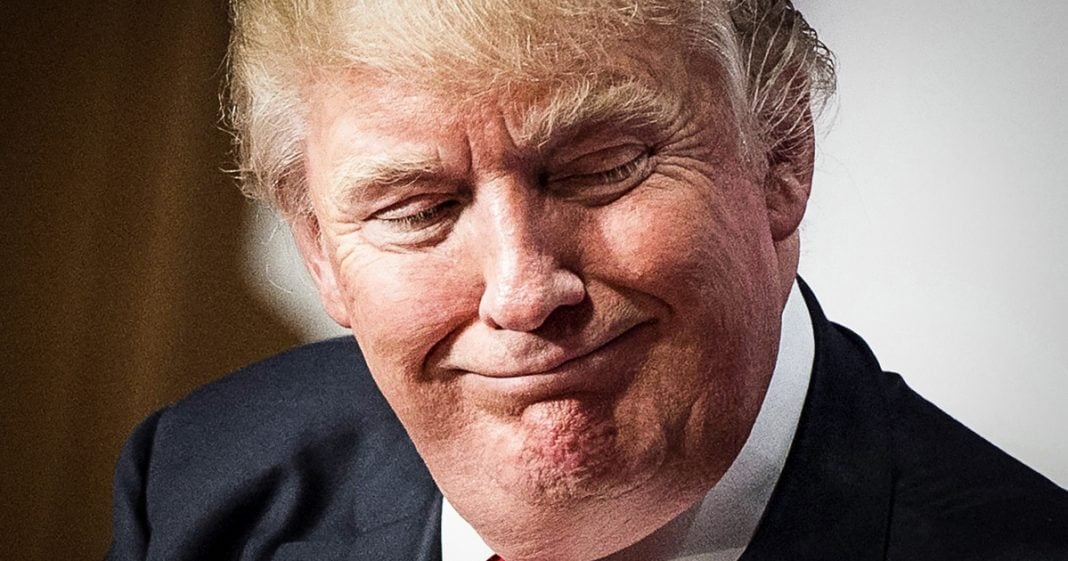 Donald Trump spent weeks telling conservatives at his rallies that he WAS on the ballot, and a vote for the candidate that he endorses is actually a vote for Trump. Well, his story changed very quickly during a recent interview with Chris Wallace on Fox News where he claimed that Republicans lost in the midterms because Trump’s name wasn’t physically on the ballot. Ring of Fire’s Farron Cousins discusses this.

In the weeks and months before the midterm election, Donald Trump was doing rallies, sometimes back to back rallies to a day, day after day after day, where he would tell the crowds than I am on the ballot, even though you don’t see my name, a vote for whoever it is I’m supporting. Here is also a vote for me. He said that in Mississippi said it in West Virginia. He said it in many other states all along the way that I am on the ballot. This guy’s name is really my name. That’s what Trump said. Now, the reason I bring that up is because during his interview with Chris Wallace on Fox News this past Sunday, Trump said that the reason republicans lost the House of Representatives was because his name wasn’t on the ballot. They had nobody to latch onto. They had nobody to really inspire them to go vote for Republicans, and that’s why Republicans lost the house.

And again, this is coming from a man who spent the prior few months telling people that yes, his name was on the ballot. I mean, does the American public forget about these things this easily or does Donald Trump think were that stupid that we weren’t paying attention? He can’t change his story just because the people he supported got shellacked in the midterms, but that’s exactly what he’s trying to do here. Trump thinks that he is the only person who can save the Republican Party, that he is the only reason anyone in this country ever votes Republican and as long as the Republican Party wants to tie their identity to that, they’re going to continue to fail. Now, that’s not saying that Trump wouldn’t get reelected, assuming he’s still in office in 2020. I firmly believe this man could. He is such a good con man. Such a good, you know, disaster artist really that, yeah, he has a real good opportunity of defeating nearly any Democrat you put up against him, which is why the Democratic primaries, uh, which you know, going to start in two years basically, uh, or, or one and a half years scurry.

Um, that’s why they’re going to be so important. We have to get this right because Donald Trump has been able to tap into the minds of these conservative voters. They firmly believe everything he tells them, so when he says, we lost, because my name’s not on the ballot. They believe it. They forget that just two weeks ago he told them his name was on the ballot in the form of this other person, and they’ll do it again. But for Trump, it’s all about ego. Again. He thinks he’s the only one who can save the party. He thinks he’s the only reason this party has been successful, ignoring the fact that it’s existed for more than 150 years before he ever even came along. But he’ll never be convinced of anything else. And as long as the Republican Party continues to buy into this cult of Trump, this personality cult that he has created, they will continue to fail.

They will eventually lose the Senate along with losing the house again and again and again. But if we don’t hold Trump accountable for some of the stupid lies that he tells all the time, then we’re also a part of the problem. And that’s why issues like this are important. The public needs to understand, even if it takes a thousand times to hear it, that this man is going to lie about every single thing he can. It’s a habit for him. It’s an addiction almost. If something bad happens, he’s not going to tell the truth. He is going to continue to lie and deflect blame and say, oh, somebody else, or it was because I wasn’t there. He’ll never accept responsibility. And that’s the biggest downfall that the republican party faces right now. Because what’s going to happen in 2020, if the Republicans do lose the Senate and yet he retains the presidency, he is going to trash every single republican loser to the point that it’s going to be difficult for them to win any elections in the years after that. He is going to cause so much harm to that party and they refuse to acknowledge it because they’re just happy to get a few conservative judges appointed throughout this country. I can’t wait to ask these Republicans in three, four years from now if it was all worth it because I’m betting almost all of them are going to say, hell no. It wasn’t.