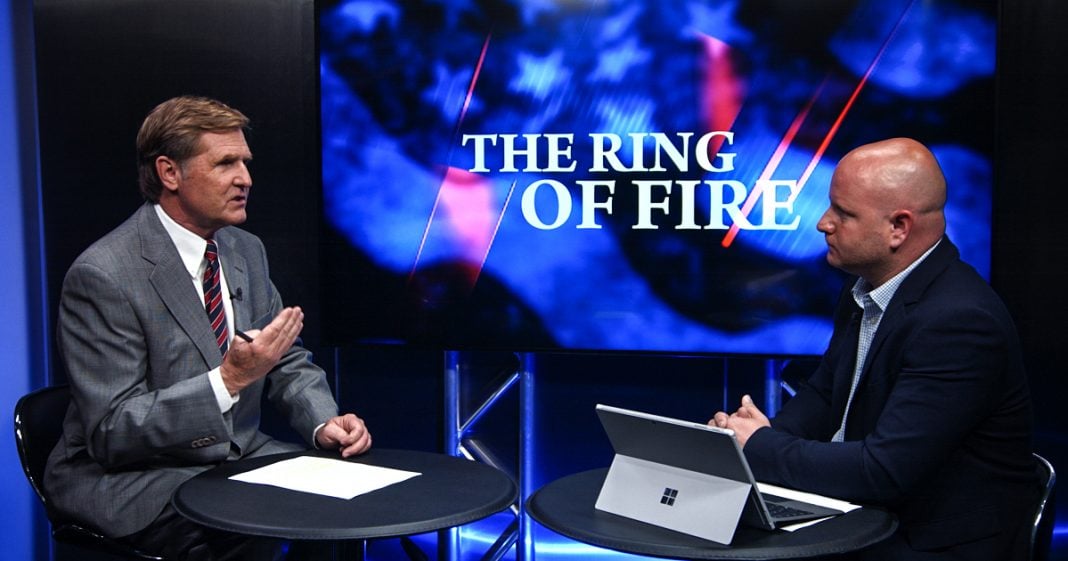 The arrest of Republican Congressman Chris Collins for for insider trading raised serious questions, being raised about whether members of Congress are capable of serving on corporate boards. Ring of Fire’s Mike Papantonio and Farron Cousins discuss this issue.

Mike Papantonio: The arrest of Republican Congressman Chris Collins for insider trading raised serious questions, being raised about whether members of Congress are capable of serving on corporate boards. What? What? People watching this show right now believe of course members of Congress can’t serve on a corporate board. I mean, isn’t that just plain, just basic monkey intelligence?

Farron Cousins: You would think that this is something that, okay, yeah, we probably dealt with this back in the ’30s. No. It wasn’t actually until 2016 that any kind of law even came on the books and all that was was Obama saying, “If you’re dealing with an issue in Congress and you own stock on it, you can’t trade that stock while you’re dealing with the …” Such a-

Mike Papantonio: No, it was-

Farron Cousins: It was such a bland piece of crap that we saw everyday from him.

Mike Papantonio: Oh, yeah. He’s on the air. You know what bugs me most about Obama? It’s the obvious things about Trump. I mean, it’s easy. Trump is an easy analysis. Bush was an easy analysis, but you got this guy, this elegant looking president who’s a wonderful speaker, charismatic, and everybody’s in love with Obama until they start really taking a look at things like we’re talking about here. First thing, the first sign to me … By the way, full disclosure. This is after I raised money for him. This is after I appeared on TV show. You set him up. You saw me Fox news where I’m beating on Fox news because it was the Hillary beating on Obama. Well, I’m there for Obama, talking everyday. Getting up at 5:00 in the morning to do these absurd friends … What was it?

Mike Papantonio: Fox and freaks, you know. I’m doing these shows, and I’m thinking okay we got the real deal here. Now, I look back, and a look back is pretty scary because the look back at Obama is story after story about this kind of thing. It is remembering coming out, we solved the problem about conflict where it comes to Congress serving business. We can’t have that. We thought, that sounds good. Wow. That’s wonderful. He’s really getting some … it was nothing. It accomplished nothing. Did it?

Farron Cousins: No, it didn’t. Here’s the problem that we … We may be a little off-topic, but this needs to be discussed. The problem during the Obama years was that you had Fox news that wanted to talk bad about Obama, but they wanted to make up crazy conspiracy theories about the death camps, the death panels, but then you had MSNBC that would only be cheerleaders. Then you had even … I hate to admit for them, but in the progressive media they didn’t want to cover this, so nobody was talking about it until after it was safe to do it after he left office. You’ve seen a shift. We’ve seen even some of these very progressive or establishment type that now say, “Wait a minute. Obama, he did a real bad thing here. People need to know this.”

Mike Papantonio: Why does it happen? It happens because we become charmed with … We’re always looking for a hero. Yeah, I don’t know what it is about progressives. I don’t know whether they read too much nights in … They’re always looking for somebody to pull the sword out of the stone and charge. They’re looking for Camelot. Aren’t they? They’re always looking for a Camelot, and they don’t understand Camelots don’t really exist. That we have to honest about who we’re dealing with, and the honesty factor with the Obama years to me has been … it’s actually been very painful. You’ve watched me go through it. You saw the sacrifices that I was making on behalf of the guy. I’d be up on a panel and they’d be four crazy people versus me.

Farron Cousins: At 4:00 a.m. That is not an exaggeration. We would be at the WSRE TV studio doing these hits at 4:00 a.m., sometimes on Saturdays, on Sundays. It was all the time.

Mike Papantonio: On behalf of Obama.

Mike Papantonio: I think for somebody … We’re going to get the criticism. “How dare you talk about Obama. He’s a …” We’ve got to be honest. If we’re not honest with ourselves about politics, there is no Camelot. There is nobody that’s going to pull a sword out of a stone. There are no heroes. They are only people, and we’re seeing that more and more with Obama right now. Where is he? Okay? Where is he? Progressives are in the fight for their life. You know why he doesn’t want get there? Because he doesn’t want to get dirtied up by the fight. Right now they need him. Look at … It’s crazy. Carter, even Carter. Carter gets this bad thing about being such a … He was not a bad president. He was a decent man. After he leaves office, he comes back and he continues his fight on behalf of people. Okay?

You got to be honest about it. Where is the guy? Well, the last time I saw, he was celebrity vacation here, celebrity vacation there. Today I’m with Barbra Streisand in California. Tomorrow I’m with Robert De Niro in New York. Who the hell cares? What I want him is in the fight. He’s missing in action, and that’s another part of this story I think.

Farron Cousins: To be honest, listen. He kind of picks and chooses. If you want to leave the presidency, go back to a private life, then you do that, but you cannot try to be Mr. Party, have fun with these people, and then jump back into politics for a day, then go back over-

Farron Cousins: Let me put this to you, because this is going to scare you, because this goes on what you’re saying. Everybody was so charmed by Obama after eight years of a guy that couldn’t string a sentence together.

Farron Cousins: Right. How bad are the Democrats going to look for a savior after four years of Trump? I mean, that … We’re going to see it even worse with the next corporate Democrat that comes up because of Trump.

Mike Papantonio: You want to take a look at her background?

Farron Cousins: Harris and Booker, the two front runners at this point.

Mike Papantonio: Booker and Kamala Harris. Booker has this love affair with the pharmacy industry where he actually … where we have a chance. Literally we’re votes, several votes away from winning a vote that would have required the pharmaceutical industry to drop their prices. You know who fights it? None other the Mr. Cory Booker. Kamala Harris, take up a story there. You know.

Farron Cousins: Oh my God. Kamala Harris is the woman who basically gave us Steve Mnuchin as the Treasury of the Secretary or Secretary of the Treasury, excuse me, because she as Attorney General of California refused to prosecute him in spite of the mountains of evidence that his company OneWest was falsifying mortgage documents so that they could foreclose on poor people.

Mike Papantonio: Actually, Kamala Harris, she caved in to political pressure. Don’t say to me, “You guys are too critical. We’re never going to find the perfect …” No. We don’t have to find a perfect person. We want to find a good one. I don’t think there’s anything wrong with that because when we failed to do that, to hold … We may have a candidate … Maybe they’re not that good looking. Maybe they don’t speak well. Maybe they don’t have the charm of Obama, but they got the heart of a lion and that’s what we need right now more than ever for Democrats. I’m Mike Papantonio here with Farron Cousins. You’re watching Ring of Fire, and we try to talk about stories that other people don’t talk about. Always stay tuned. Always tune in. Hopefully we’ll make you a little mad every now and then. That’s kind of our goal.