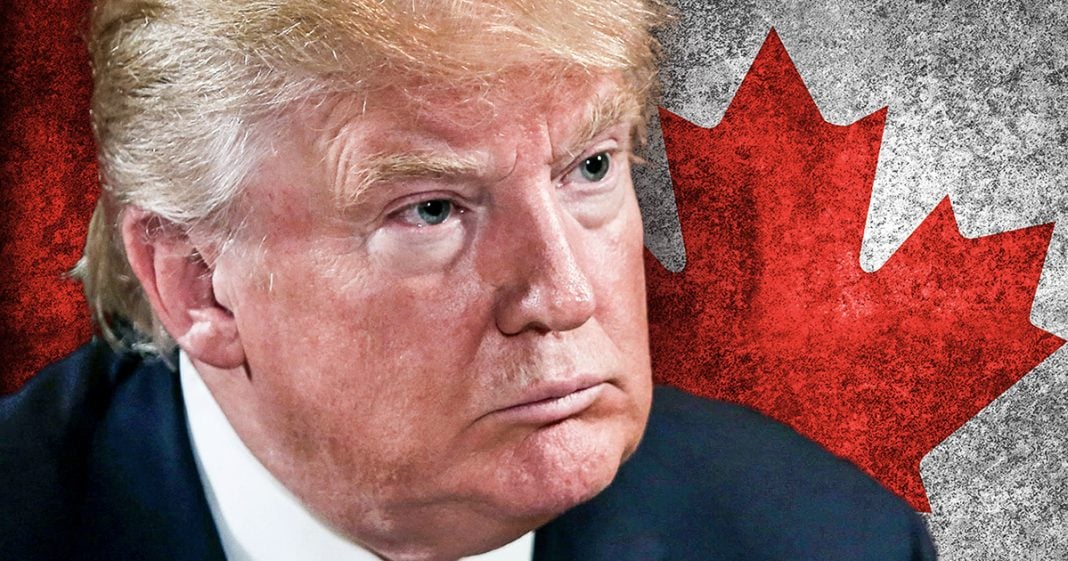 Party loyalists always claim that if the opposition wins, they’ll move to Canada. This is typically just a hollow threat, but thanks to Trump, those threats are becoming reality. But these aren’t disillusioned Party faithfuls leaving the country, they are immigrants who fear persecution and possibly even prosecution under the Trump administration. Ring of Fire’s Farron Cousins explains.

And we’ve all heard the trope that if the opposition party wins the presidential election, I’m moving to Canada. You know, Democrats set it in the 2004 election with George W. Bush, Republican Senate with Obama in ’08 Democrats said it again with 2016 with Trump. Everybody wants to move to Canada. Well, none of that really ever materializes. Nobody. I mean there’s probably a few people, but even these hardcore party loyalists so mad, the other side, one, they don’t actually end up moving to Canada. Nonetheless, Canada has seen a massive spike. It’s actually hit historic highs in the number of people leaving the United States to seek asylum in Canada. But these aren’t disaffected party loyalists. They’re immigrants, naturalized citizens here in the United States. Some of them even born here, but there are so terrified of the Trump administration and their anti-immigrant policies and rhetoric that they are trying to seek asylum in Canada.

Last year, the number hit 2,550 US citizens trying to flee our country to seek asylum in Canada. And again, these are immigrants. These are people who are afraid that Donald Trump is going to deport them, even though they’re actually citizens here in the United States. Many of them born here, but some of them brought their non-citizen parents over so they’re terrified for their family. So this isn’t just about partisan, like I’m pissed you one. I’m leaving the country. These are people who have legitimate fears about their own future, about their lives, about their families having to leave our country because of who the president is and the things he has said he wants to do. This has hit a disgusting level here in the United States. Again, in my lifetime, I have not seen the level of vitriol coming out of the office, of the presidency towards immigrants ever, ever. I know it’s been worse in the past.

We have done horrible things to US citizens to immigrants, to people of color, the people of different religions, but in my lifetime I’ve never seen it like this. I wasn’t alive for some of the worst stuff, but this is bad. The fact that we have people who fear for their lives in the United States just because of the color of their skin or their last name or their culture that they brought over, they fear for their lives so badly that they have to leave this country because of the president of the United States that tells us we’re on the wrong path. We’re on the wrong path. As a country. The Republican Party is on the wrong path as a party, but they show no signs of wanting to correct it. If anything, they want to double down. Donald Trump wants that border wall. He wants more people locked in these detention facilities and that’s why they’re building new ones, bigger ones, better ones, more tense, more cages, more people locked up, and that’s why people who wants thought the United States was this beacon of hope, this great country, this shining city upon a hill. They’re leaving it because now they’re seeing it for what it really is a white nationalistic country that has complete disdain for immigrants. It shouldn’t be this way. It wouldn’t be this way if Donald Trump was not an office, but he is, and so this is the new reality in which we have to live until we can finally get this disgusting human being out of the White House.