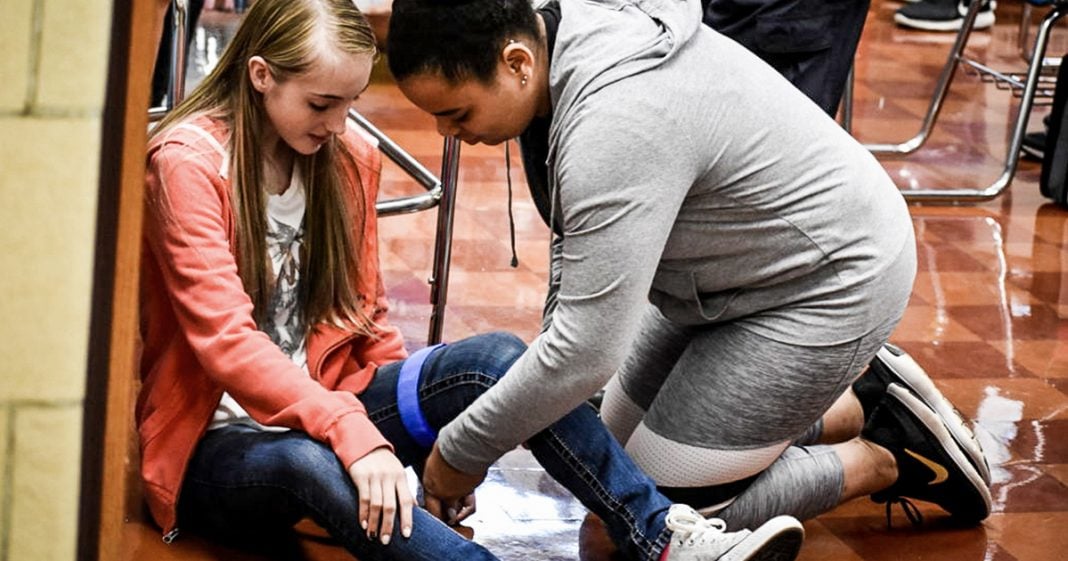 Students in some areas of the country are getting special training from the “Stop the Bleeding” campaign. The training is to teach high school students how to stop a gunshot wound from bleeding which could save lives in the event of another school shooting. The big question is why we’re teaching high school students to do triage instead of doing something about the amount of guns in our lives. Ring of Fire’s Farron Cousins discusses this.

Students in the United States are beginning to learn how to stop bleeding from gunshot wounds. This is part of a program called stop the bleed that was actually started back in 2015. Um, basically what it was was a public education program by surgeons and doctors to teach people how to stop bleeding, which could save lives in the event of a mass shooting or any other kind of traumatic experience. 95 percent of people in these mass shootings that we have seen typically die from loss of blood. So if we’re able to stop the bleed, we might be able to save more lives. But again, here’s the thing, the, the Stop, the bleed program is starting to go to high schools. And some high schools, particularly in the state of Maryland, have actually mandated that students and staff go through this training so that they’re prepared to act and help save lives in the event of a mass shooting.

So I want to word that a different way here. We’re now at the point where we’re having to teach high school kids how to save their friends and fellow classmates if they get shot at school because our government is so inept and inadequate and indebted to the NRA that we can’t possibly get any kind of meaningful gun control legislation in this country, so instead in the absence of federal action on the real problem, which has all the guns we’re having to teach kids who are also learning how to drive, studying for the sats, cramming for a big midterm now, they also have to have the added stress of learning how to stop a bullet wound from bleeding out and letting their friends or teachers or whoever it is die in the classroom. I’m not trying to knock this program at all. Stop. The bleed is very important and it is something that apparently we have to have in this country.

The problem is that we shouldn’t have to have this discussion. The stop. The bleed program shouldn’t even have to exist and yet it does and the reason it does is because our politicians, our elected officials are doing nothing to protect us. They’re doing nothing to protect our children or our churches or anywhere else. Our shopping centers are grocery stores. All of these areas are nightclubs, have experienced mass shootings within the last 12 months and instead of taking action, they continue to do nothing. They continue to tell us it’s not the time to talk about it. Even though we’ve only averaged eight days this year without a mass shooting, so if we can’t talk about it immediately after one happens, given the fact that one is happening pretty much every single day, there will never be a time to talk about it according to Republicans. So instead we have to have these doctors and nurses and surgeons come out, teach our children how to create a tourniquet to stop bleeding because the government won’t do a damn thing to stop them from getting shot while they’re trying to learn. That is absolutely pathetic. The lawmaker stopping action on gun control are pathetic and the NRA is an absolutely corrupt criminal, pathetic organization for allowing this to happen.