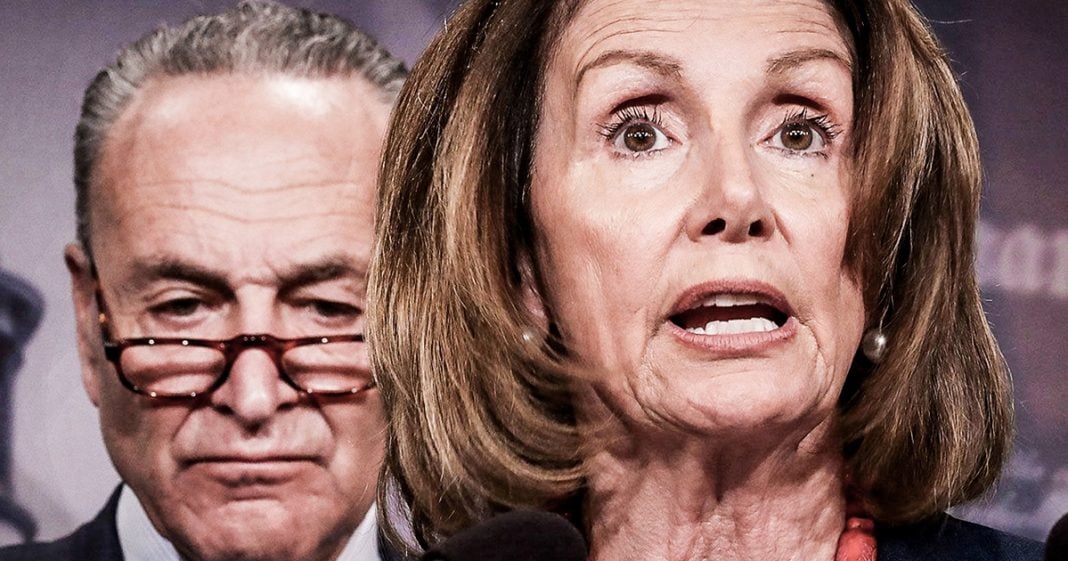 Now that Democrats will be the majority in the House of Representatives they have to remember one very important thing – Republicans will NEVER agree to any progressive ideals and compromise is no longer an option. The American public put Democrats back in the House for a reason, and if the Party forgets this, they can kiss 2020 goodbye. Ring of Fire’s Farron Cousins discusses this.

Ever since the Democrats won the house back in the midterms, you know, new class coming in in January, there was a lot of arguments on the left that kind of died down a bit, but whether or not Nancy Pelosi should be the new speaker as she was previously the speaker of the Democratic majority, she wants to be. Again, she does seem to have the best credentials to do this, but anyway, there was a lot of argument about whether or not she would be progressive enough and I understand that argument and I have my own doubts about her as well in that front. But here’s the thing, and this is what Pelosi needs to remember because it’s fairly obvious at this point. She’s going to be the next speaker. You can’t compromise with the Republicans. None. Not even once, not even a little bit. There are no compromises to be made with these despicable, deplorable human beings who have spent the last few years sucking up as yes men to Donald Trump and who spent the previous eight years obstructing every single thing the Democrats needed to do.

And I think that’s the biggest problem people have with Pelosi is they’re afraid she’s going to compromise. I have that same fear and that’s why I’m trying to say this is as rational and clearly as possible. Democrats cannot compromise. There is no compromise to be had with these people. When you look at what happened in the midterms, the wave of progressives that are coming into the House of Representatives, the policies that they ran on the. We’re not taking corporate money platform that they ran on. That’s what the public wants. The public wants universal healthcare. They want debt free college. They want infrastructure spending. Those are not areas in which Republicans are willing to negotiate or compromise and the public doesn’t want to see that either the best move the Democrats could do right now other than kicking Schumer out of leadership. Because that dude is a compromised machine.

He will give away the farm just to go and have a three day weekend, which we saw several times in recent months when he agreed to green light a bunch of trump judicial appointees because he wanted Democrats to go home and campaign. It was a long weekend. They wanted to get out of there. Go on. Yeah, you have your judges destroy the judicial system. I want to get home and have some dinner. That’s what Schumer did. So Schumer is a lost cause. He is a horrible corporate Democrat that needs to be removed, uh, from a leadership position immediately Pelosi could fight Pelosi, might be the leader the Democrats need. But that’s only if we continue to push only if we continue to say do not compromise. We have already seen, and this is before they are even sworn in as representatives Pelosi start to bend in the progressive way.

And that’s what needs to happen. The only compromise Pelosi or any leadership a leader should be making in the Democratic Party is to move further left. That’s what the public voted for them to do. That’s what the public wants to see. And if it means having Republicans voted against this legislation, then so be it. Use that as your platform for the next election. Tell the voters they could have had debt free college. They could have had medicare for all the Republicans voted against it. And rather than compromise and give you a crappy piece of legislation that they’re going to pick apart, we wanted to give you the full thing because you deserve nothing less. And if Republicans aren’t willing to do it, then please put somebody in office that’s going to help us do it. But that person, I guarantee you is not going to have an r next to their name.

That’s the message the Democrats need to be sending. Get back to being the party of the people. Get back to being the party of FDR, pushed for this green, new deal. But under no circumstances are you to compromise with these horrible republicans who wanted nothing more than to see Obama fail. And now they’re elevating Donald Trump and pushing the worst, most right wing anti-consumer, anti-American citizen legislation that we have seen in a long time. There’s no compromise to be had with those people. And if Pelosi can stand her ground and only bend when it comes to the progressive wing of the Democratic Party, we may just have a shot at some really good government. But if she goes soft, if she starts compromising with Republicans, they can go ahead and kiss 2020 goodbye.