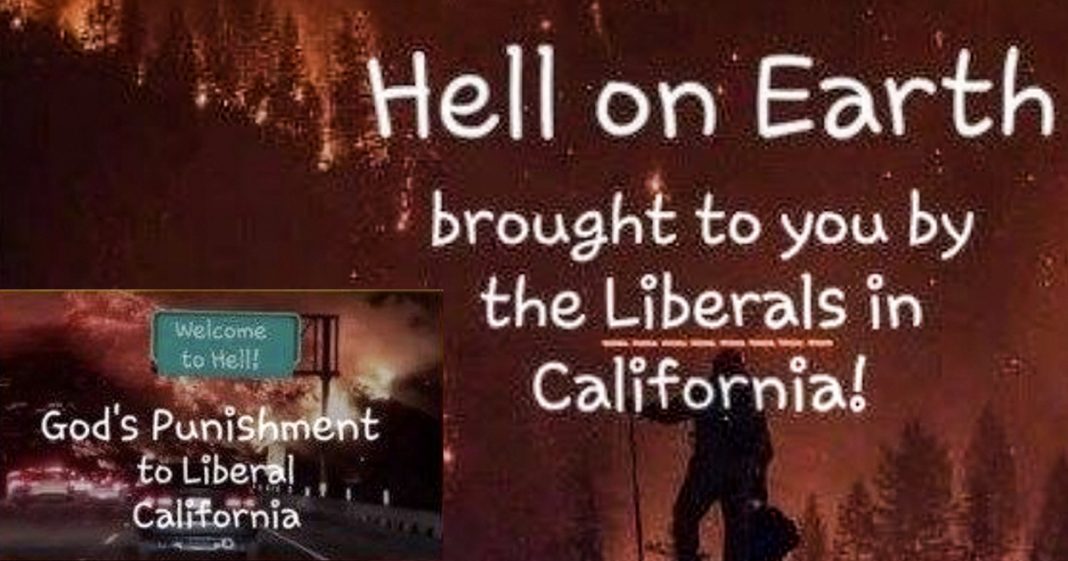 The chair of the Columbiana County Republican Party has been posting on social media recently claiming that the deadly wildfires in California as the result of God’s punishment to the state for being so liberal. More than 70 people have already lost their lives and over 1,000 remain missing as the fires continue to burn, and the Republican Party believes that God’s wrath, not climate change, is the cause. Ring of Fire’s Farron Cousins discusses this.

The Republican Party will do anything imaginable to try to shift the focus off of climate change with regards to the massive deadly wildfires in the state of California and onto something else, and that is exactly what a man by the name of David Johnson who happens to be the chairman of the Columbiana County Republican Party in the state of Ohio. He did that recently through a series of social media posts where he claimed that the fires in California, the death and destruction taking place there was not because of climate change, that was simply God’s punishment for California being so darn liberal. So the 70 plus people who have died, which that number grows higher by the day. The nearly 1000 people missing in these fires. It’s not because we’re not doing anything to protect us from climate change. And the state’s gone through a years of droughts. No, no, no, no, no, no.

It’s not even as trump said, because we’re not raking it enough. According to David Johnson. It’s because God is pissed off at California for being too liberal. And what’s funny here is that this is the typical Republican response to any natural disaster, Hurricane Katrina in New Orleans, all of the major evangelicals out there on the Republican side, we’re saying, well, it’s because there are a lot of gay people there. And God sent the storm to wash them away for getting the fact that Louisiana is a solidly red state surrounded by other solidly red states that consistently votes Republican. Yeah. God was punishing them just because of the small community of gay people in New Orleans. Uh, so to Mr Johnson who says that God’s pissed off in California right now, why do we still have hurricanes hitting deep red areas in the south, North Carolina, South Carolina, Florida, Georgia, all of those states had been smacked with hurricanes over the last 18 months.

So why is God mad at them or, and hear me out on this? Is it because the entire climate of the planet is changing? Because we as human beings have been too irresponsible to take care of it? No. I am sick and tired of hearing these idiotic excuses from Republicans. Oh, this is God’s wrath. Nothing we can do about it. It’s just going to happen. That’s a lie. There’s plenty that we can do. Well, at this point, maybe there’s not, but 10 years ago there was plenty we could do. We just chose not to because as a country we’re incredibly arrogant and most Republicans told us, Huh? How arrogant is it for us to assume that we have the power to even change the climate? Well, scientists told us we were doing it. They’ve been telling us that since the late 19 seventies, but sure, go ahead and take the side of. We’re all just too arrogant to do something about it. The problem is we weren’t too arrogant to think we could change the climate. We are too arrogant to think that we couldn’t stop it, and that’s why we’re in the situation that we’re in now. We can expect more wildfires, more droughts, more floods, stronger hurricanes, and I can promise you zero of these coming natural disasters will be because God is pissed off at a portion of this country.