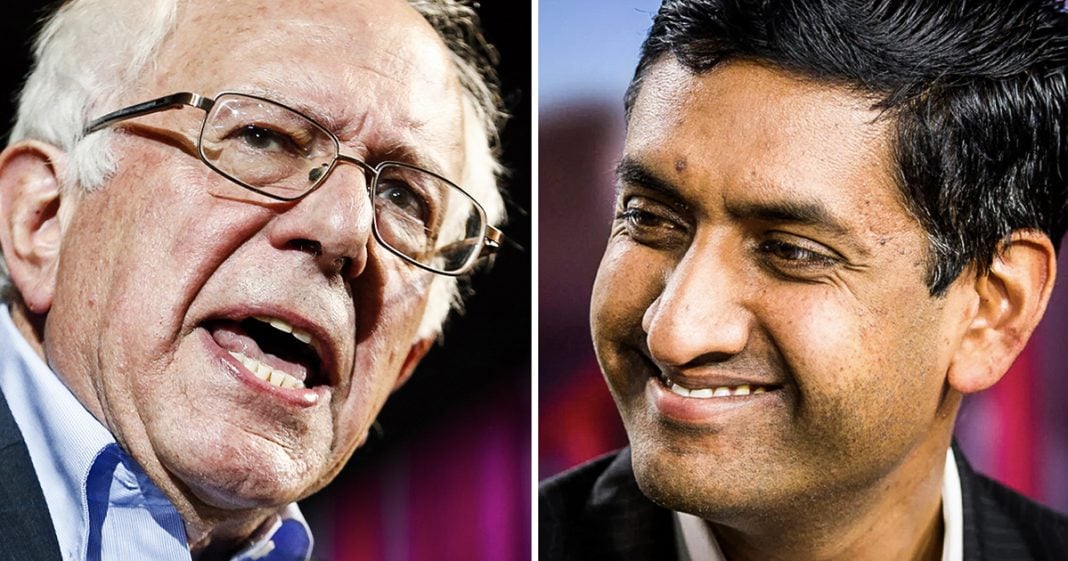 Senator Bernie Sanders and Representative Ro Khanna have joined forces again to take on the corporate greed and inequality that has become commonplace in American businesses. This time the pair have put forth legislation in their respective chambers that would prevent companies like Walmart from buying back their own stock unless they pay their employees a living wage. These two say great success with their actions against Amazon, so let’s hope that success continues with this new legislation. Ring of Fire’s Farron Cousins explains this.

Senator Bernie Sanders and democratic representative Ro Khanna have announced a new joint legislation that each of them has introduced in their respective chambers, chambers, Sanders in the Senate and the house. It’s called the Stop Walmart Act, and what it’s going to do is prevent corporations like Walmart from engaging in stock buy back if they’re not paying their employees $15 an hour, basically, if you’re not paying your employees a living wage right now, the starting wage for a worker in a Walmart as $11 an hour, which amounts to about 19,000 per year, well below the poverty level for a family of three. So Walmart is paying poverty wages. Taxpayers in those area end up subsidizing those workers through the form of a, uh, food stamps and other Medicaid programs like that. So much like they did with Amazon, with a stock basis act, sanders and Kona are coming after Walmart hoping to recreate the same success that they had with Amazon.

Here’s the thing, we know right now, the corporations are engaging in massive stock buybacks. That’s actually what they have invested most of their tax cut money in. It’s not giving workers a raises, it’s not increasing their benefits, it’s not expanding their company and hiring new people. It’s on stock buybacks which only enrich the shareholders and the ceos of those corporations. Walmart itself announced a $20,000,000,000 stock buyback recently after getting their tax cut. You know how much it would cost Walmart to pay all of their employees a minimum of $15 an hour plus benefits, which this legislation calls for. It would cost them three point 8 billion a year, but they were going to spend 20 billion buying back their own stock this year, so doing what this legislation would call for what actually saved them. Money would increase. Local revenues would force other employers in those areas to raise their wages to remain competitive.

Consumers would have more money to spend, which they will study, show that people who make under, I think about 100,000, 80,000 a year typically spend 100 percent of their paycheck, so even increasing their wages, they’re still going to spend it all. They just might be able to now spend money on going out to dinner once a month. Getting those car repairs done that they’ve been putting off for three months because they couldn’t afford it. All of those things, no matter how small, create more economic activity in a certain area. Bernie Sanders understands that Ro Khanna understands that in a handful of Democrats in DC, understand it, but not enough people understand how that works. This isn’t about punishing. Accompany. This is about making sure that workers are taken care of so that can go out and increase economic activity. This isn’t about, you know, showing a corporation how much power the politicians have.

It’s about showing a corporation what can happen to communities when people make a living wage, and yes, part of it is also about making sure that we start to close that gap between the haves and the have nots. The bigger that gap gets, the worst the economic activity in an area becomes, again, Sanders and Khanna understand this. They also understand how much success they had with the Stop Bezos act without ever having to pass it. They use the bully pulpit, they use their microphone, they use their positions to get an Amazon to change its ways without ever having to pass the legislation. That is a remarkable feat. These two men are out there doing what everyone in Washington dc should be doing and what a lot of the newcomers in DC are planning to do as well. You know, we got a big progressive wave that came into congress that’s going to be sworn in in January and they’re going to jump on this legislation as well.

We need more fighters out there like this and we just got a whole new, a set of recruits elected in the midterms, so hopefully much like the Stop Bezos Act, this one doesn’t even have to come to a vote. Hopefully Walmart and all the other companies that are targeted by this because it would affect a lot of them. Hopefully they understand that if they give their workers a little bit more, everyone, including the ceos of those companies will make more money. It is a win win, no matter how you slice it. All the shareholders have to do is take a small temporary hit and then a few months there’ll be making even more money because they took care of their employees who now have more money to go out and spend in the local communities and God forbid maybe they have enough money to pay for their prescription drugs or pay for their rent or pay for medical care or dental care or car repairs. We have to start taking care of one another. That is the mentality that’s been missing from corporate America for far too long, but luckily people like sanders and Khanna and all these new comers to the House of Representatives, they understand that that’s important and they understand that. That is the only way this country is going to get better.