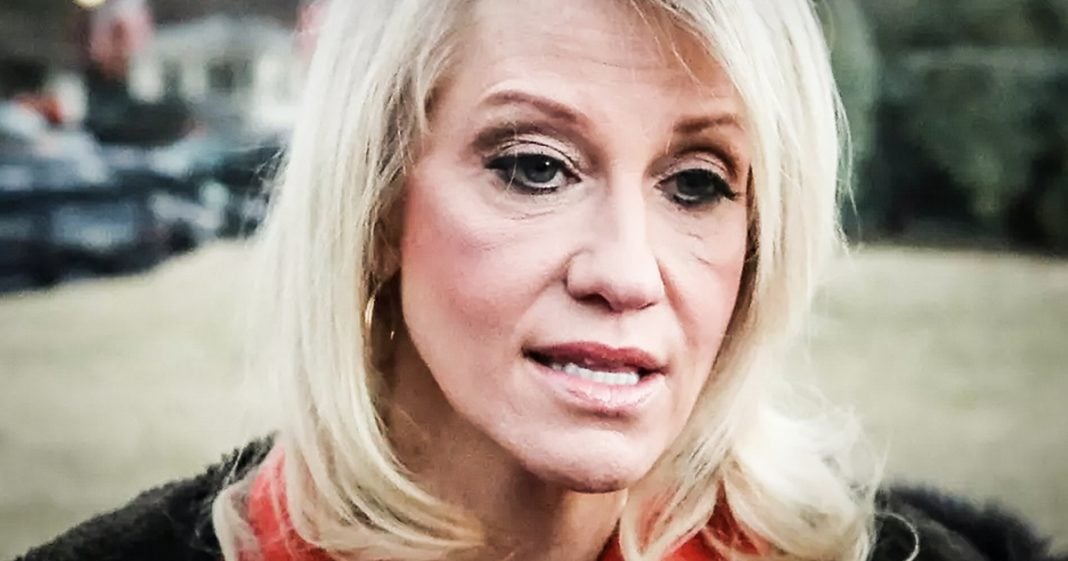 During a recent conversation with reporters, Kellyanne Conway said that Trump is certainly not afraid to sit down and answer questions from Robert Mueller, he just doesn’t feel like it is necessary. Donald Trump is one of the biggest cowards to ever occupy the Oval Office, so her claims are clearly “alternative facts.” Ring of Fire’s Farron Cousins explains why, based on Trump’s own words and actions, Trump is VERY afraid of sitting down with Mueller.

On Monday, Kellyanne Conway told reporters that Donald Trump is 100 percent, not afraid to sit down with Robert Mueller. This came in response obviously to the fact that Donald Trump recently completed his written responses to some of the questions from special prosecutor Robert Mueller and Kellyanne Conway wanted to make sure that all the reporters out there knew that Donald Trump is not afraid of anything, and he absolutely would sit down with Robert Mueller…he’s just not going to because according to Kellyanne Conway a, he doesn’t rise to that level and just isn’t necessary for him to do that, which is weird because hasn’t Robert Mueller been trying to negotiate a sit down interview with the president of the United States for, for months now, almost a year actually. He’s been trying to get his lawyers to agree to let Trump and him sit together in a room and he asked questions and Trump answers. Um, so I would say Kellyanne, that, uh, as usual, you’re completely wrong about this and you’re absolutely lying through your teeth.

The special prosecutor wants to sit down with Donald Trump. He would much rather have him tell him the answers to his questions than have to read them on a form that it’s very likely Trump didn’t even fill out himself. Donald Trump is terrified of Robert Mueller, just like he’s terrified of visiting troops overseas, just like he’s terrified of going into any natural disaster area in the United States. And that’s why he typically waits four or five days after the event occurs to get his ass down there. He is afraid, he is afraid of everything. He is afraid of every one, including everyone in that White House because, hey, let’s not forget, we still haven’t found out who the White House op ed writer is yet. He doesn’t trust anyone. He’s paranoid as hell. And he absolutely would be terrified to sit in the same room with Robert Mueller, let alone answer any of this man’s questions.

Furthermore, Rudy Giuliani, Donald Trump’s lead attorney in this whole mess seems to corroborate what I’m saying here because he’s admitted that if Mueller sat down with Trump, it will be a trap. Trump would, uh, you know, perjure himself, he would get caught in a lie. There’s no good outcome for this, so Trump can’t do it. Now, first and foremost, if you’re innocent, you don’t have to worry about being caught in a lie. If you did something wrong and you don’t want people to find out, then yeah, it’s pretty easy to perjure yourself, which is pretty much the case with Donald Trump and that’s why he’s so terrified. That’s why he’s so afraid. And that’s why we’re getting reports every other day about the tension and anger growing inside of him in the White House. Kellyanne Conway was doing what she does best here, going out there lying to reporters saying that everything’s fine and please ignore the massive dumpster fire going on behind me because that is exactly what’s taking place in the White House. As Trump grows more afraid and more fearful of what Robert Mueller and the investigators are going to do to win.