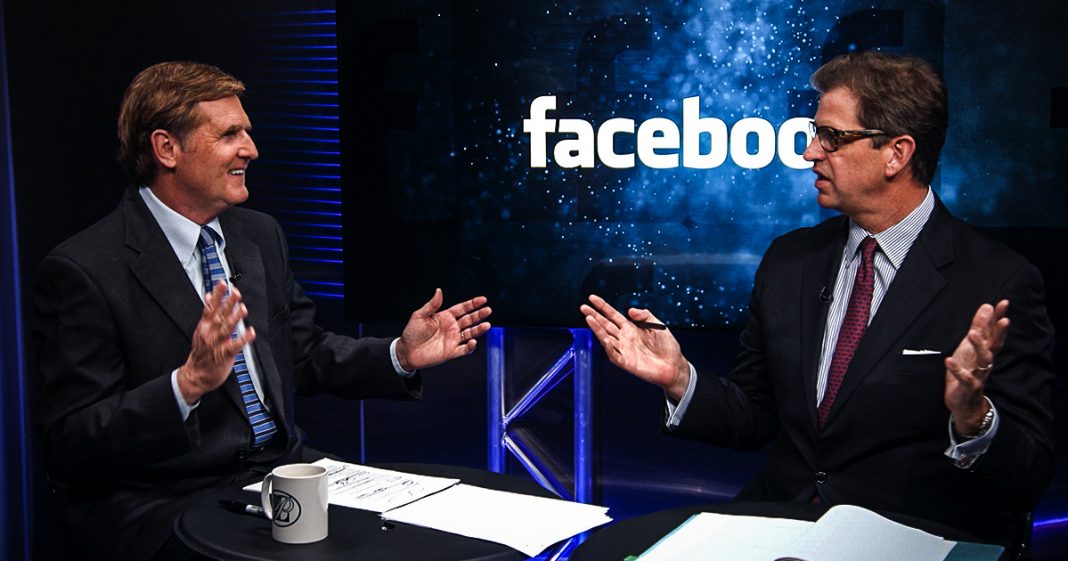 Facebook is trying to gather information with facial data recognition and harvesting. Ring of Fire’s Mike Papantonio and Peter Mougey discuss this issue.

Mike Papantonio: This story, facial recognition, people probably don’t know this story. Class action was filed, by a friend of ours-

Mike Papantonio: Geller is a … Paul Geller’s actually a friend of ours that we’re working on a … we’re working on the opioid, national opioid case with him. Very good lawyer. He filed a case that said that, is class action case. We said that Facebook is trying to gather information with facial data recognition and harvesting. What’s your take on this case?

Peter Mougey: Well, I have no earthly idea. These are a line of cases that are coming from all over the country. The Facebook case about taking your facial recognition and using it and storing it, there’s actually acts around the country that prohibit that from privacy perspective that you can’t take those biometric measurements off somebody’s face and use them. Here’s what I think is interesting. The way these cases are losing, and it’s not just this kind of cases. It’s also the data breach cases. Is the argument from the defense is that there’s no harm. That part of the Article 3 standing to bring a case is you have to demonstrate-

Peter Mougey: Where I get a little uncomfortable with this is if somebody steals your data, your information, your driver’s license number, your Social Security, and you can’t show that it’s actually been used to cause you any financial harm, or in this case, so they stole a picture of your biometric, Facebook did, you can’t show any harm. A lot of courts are kicking these cases out around the country. The case law’s developing, but I’ll tell you what. If you’ve gotten your information stolen and then somebody tells you you don’t have any harm, I don’t think you, it’s …

Mike Papantonio: Okay, look. Let’s say that somebody was a celebrity. Okay? I’ve taken that celebrity’s facial information. I’m going to use it. There’s a dollar value on that. I mean, that’s clear. That’s a little more clear.

Mike Papantonio: The argument has always been that yeah, we did this. The ugly thing is, “Yeah, we did this and unfortunately we got caught doing this thing.” That’s basically their defense. “We did it, we got caught doing it. I wish we hadn’t gotten caught. You know what, Judge? Even though we got caught, there’s really no … There’s a violation, yeah, but there’s no damage to the violation.” Really what the violation comes down to is notice to that person and consent by that person to say, “Yeah, you can take images of my face. You can store the data. You can do whatever you want to with it.”

Peter Mougey: This is the second time Facebook’s popped up in the last few weeks.

Peter Mougey: They got the Virginia case, which is the … Is that the case about Robins? No, that’s not it.

Mike Papantonio: No, no. The Virginia-

Peter Mougey: That was that he couldn’t sue an online search engine for posting inaccurate information until he suffered an actual harm.

Mike Papantonio: Actual harm is how they try to describe when there’s no actual harm. Ninth Circuit said differently.

Peter Mougey: Ninth Circuit said different, which of course that’s California, and a little bit more liberal. That has a more liberal standard that says economic status could cause concrete harm that could affect your ability to get a job, unlike more innocuous information about a wrong zip code. I mean, you can get your … There’s a lot of circuits around the country that says you can get your personal information stolen, but as long as you can’t demonstrate somebody actually used it to get a credit card or charge against you, you don’t have actual harm or concrete harm. The definition of concrete harm is what the turnkey is here. That standard needs to be broadened because otherwise there’s no … Hey, look, we don’t have to really pay to keep your information safe because there’s no ramifications for hackers.

Mike Papantonio: Yeah. Let me point something out. State legislators can do something about this. For example, Illinois. In Illinois there’s a very clear statute. It’s an enacted statute because they went ahead and looked at this whole cyber problem and they said we have a statute that if you do, if Facebook does these things and they don’t get consent, and they don’t get noticed, a person doesn’t get noticed and consent, that there’s a statutory recovery. Every state could do that, and as a matter of fact, depending on what Paul Geller, our friend does out in California, they may have to end up doing that. Don’t you think that? Sometimes a big lawsuit like that changes the way-

Peter Mougey: Will drive the … absolutely. Now there’s enough mass of these cases from around the country that should push them. One of these, the issues in the Illinois statute was even your facial geometry, so facial recognition that they’re using. Have you used that clear thing in the airport?

Peter Mougey: Where you put your fingers on it? It’s incredible what kind of information pops up on those things.

Peter Mougey: It’s a little scary, but the standard needs to be broadened up to protect us at the end of the day.