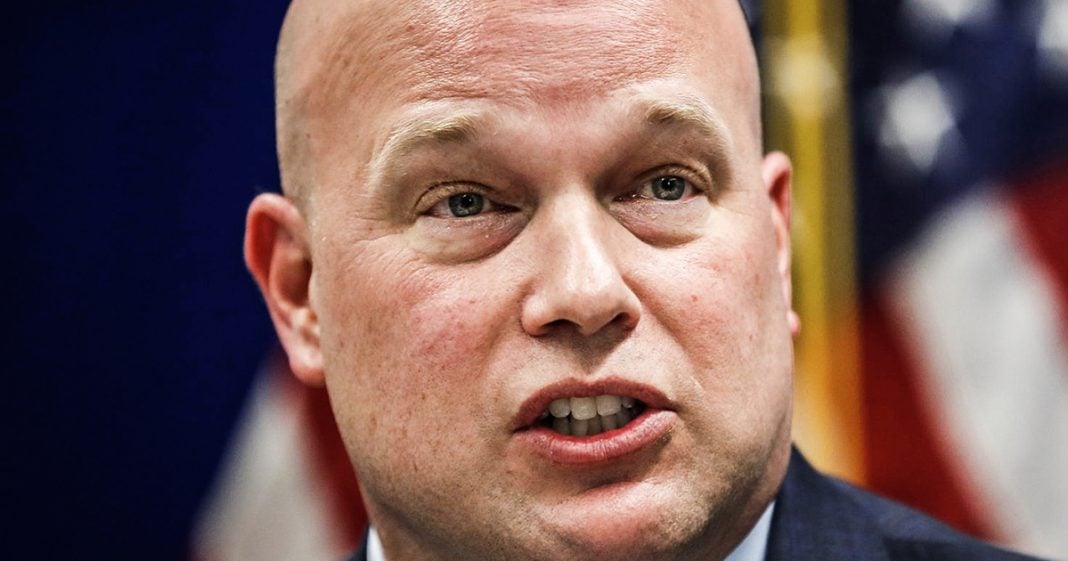 A group of Senate Democrats have filed a lawsuit alleging that Trump’s appointment of Matthew Whitaker as acting Attorney General is unconstitutional, as the Attorney General is supposed to be approved by the Senate. On top of that, Whitaker is also plagued with conflicts of interest and is grossly unqualified to be serving in this capacity. Ring of Fire’s Farron Cousins discusses the legality of the appointment and the conflicts that Whitaker seems to be ignoring.

A group of Democratic senators have filed a lawsuit in the US District Court for the district of Columbia, arguing that the appointment of Mathew Whitaker as acting attorney general by President Donald Trump was completely unconstitutional. Their argument says that Whitaker’s appointment violates the constitution appointments clause because the US Senate never confirmed Whitaker to any post, so this means that had Whitaker previously gone through any kind of Senate hearings, Senate confirmations, any kind of vote whatsoever. This wouldn’t be an issue of him temporarily taking over as attorney general since he did not go through those processes and was never interrogated by the Senate, never answered questions, never had to be held accountable for anything. His appointment to and a confirmed position is unconstitutional according to this constitution appointments clause. That’s what they’re arguing the lawsuit. Now, on the other side of it, the White House is saying that this absolutely is permitted through the vacancies reform act, which says the president can appoint a non confirmed person to a confirmed post for as many as 210 days without them having to go through the nomination process.

The White House’s office of legal counsel has also said, no, no, no. What trump is doing is 100 percent constitutional. Now, before we get into the problems with Whitaker, I mean let’s focus on the legality of this for just a minute. If the Democrats are correct, which it would seem that they are on the surface then yes, Whitaker could not serve as the acting attorney general and that temporary position would have to be given to someone who has been confirmed to another position by the Senate. Makes perfect sense, right? It’s vetting, it’s transparency. It’s knowing who this person is in showing that yes, at one point they did have a majority to put them in office so they could temporarily serve in this capacity. Whitaker’s never had that. The problem here is that this is going to end up going to a higher court and whatever that court decides is forever going to change the way things work in Washington DC.

This is bigger than Matthew Whitaker. This is bigger than Donald Trump. At least you know in the long run, but what this would mean if a judge rules with the trump administration is that any idiot off the street quite literally could be appointed as an acting attorney general. They can be appointed as any agency head without ever having to sit in front of the Senate and they could sit there for at least 210 days. That is a major threat to our democracy. That is a major threat to the Republic of the United States in the way the government functions. Now back to Whitaker. Obviously this man has huge conflicts of interest and that is exactly why Donald trump put him in that position. This is a guy who already laid out in an op ed over a year ago, how he would get rid of Robert Mueller by essentially defunding the investigation and watching it all unravel.

That is why Donald trump put him there. Unfortunately, you can’t argue that from a legal standpoint, you can’t challenge somebody just because of that, and that’s unfortunate because we know that’s why it happened, but that’s why the Democrats have to go this alternate route. Using this obscure clause in the constitution to hopefully force Whitaker out before he’s ever able to do anything drastic in terms of this investigation. This is a tricky one. It’s one that’s going to be appealed, and again, this is a court case like so many others that is going to have a dramatic effect on the future of this country.