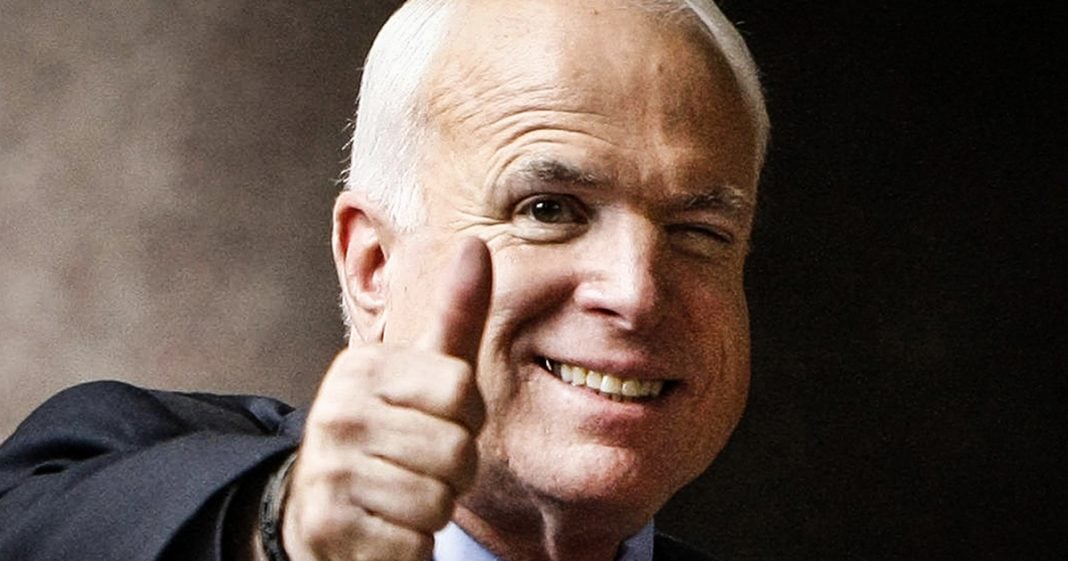 According to recently-defeated Republican Representative Jason Lewis, the Republican Party actually lost the midterm elections in July 2017, at the exact moment that Senator John McCain voted against destroying the Affordable Care Act. By preserving Obamacare, as Lewis writes, McCain handed Democrats a victory more than a year before the midterms took place. Ring of Fire’s Farron Cousins explains why a deceased Senator makes the perfect whipping boy for the Republican Party, and why they are completely wrong about why they lost the midterms.

The Republican Party claims that they have figured out exactly why they lost the house in the recent midterms and according to recently defeated Republican representative, Jason Lewis, the reason they lost the midterms was because of John McCain. The late Republican Senator John McCain somehow caused Republicans the House in the midterms. Writing for the Wall Street Journal, Jason Lewis made the following claim. Again, this is a guy who recently lost his reelection bid. The Republican Party lost its House majority on July 28th, 2017 when Senator John McCain ended the party seven year quest to repeal Obamacare. That’s it. Ladies and gentlemen, they. They nailed it. They finally uncovered the truth here. John McCain, voting against the repeal of the Affordable Care Act is apparently what just cost the Republicans, the House of Representatives. Obviously that’s not true. I mean, that’s not what happened. Jason Lewis can piss and moan all he wants, but he’s 100 percent wrong about that, but let’s take a moment to actually examine the actual claim here.

How could a late Republican senator, senator cost Republicans, the House of Representatives, while gaining more numbers in the Senate over a year later, that claim on its own, doesn’t have any merit whatsoever. Yet Lewis didn’t hesitate to blame McCain for this failure of the Republican Party. Furthermore, it actually shows the Republicans have no idea why they lost the midterms. They lost the midterms one because historically that’s what happens. That is just what happens in the first year of a majority party’s presidency. History says so. Second of all, they don’t seem to understand that the American public is kind of pissed off right now. We’ve got these trade wars that seem to be hurting the US economy and accomplishing nothing else. They’ve seen empty promise after empty promise from the president of the United States, and let’s not forget the big one. Republicans passed a tax cut that only benefits corporations who are using the money to buy back their own stocks.

They’ve cut over 100,000 jobs and working class voters got absolutely nothing out of the deal. Those are the big reasons why Republicans lost. There’s a lot of other ones such as, as Lewis points out a, the fact that Republicans wanted to appeal the affordable care act that during the repeal process achieved higher than ever approval ratings. The Public Republicans and Democrats alike are afraid of what’s going to happen to their healthcare. If Republicans get their hands on it. I mean the blue wave actually could have been a lot bigger. Had John McCain voted Yes to repeal the affordable care act. Instead he voted no, saved it along with a couple other Republicans and voters forgot about it. They wouldn’t forget about it, have they lost their health insurance, but the fact that Republicans don’t seem to understand why they lost only proves much like the Democratic Party for years and years and years, they’re probably going to continue losing.

If you do not address the problems within your own party, you’re destined to repeat them in every election until you realize what happened. Democrats have woken up to what happened to their party and why they kept losing and they changed it and didn’t want to change it. They were kind of forced to change it through a strong progressive challengers in the primaries, but it did change and things are getting better. Republicans want to continue to beat up a dead senator because he can’t fight back. Obviously, if John McCain were still alive, Lewis wouldn’t be saying this kind of crap today, but I expect John McCain to take a lot more heat from Republicans because again, he can’t fight back and that’s the perfect whipping boy for a Republican party that is absolutely terrified to say something to someone’s face. They have no fear of Cindy McCain and they have no fear of Meghan McCain on the view show, continue supporting the Republican Party even as they trash her father’s legacy, but they’re going to keep beating up on him because they’re too afraid to have those fights with somebody who can actually speak back to them.