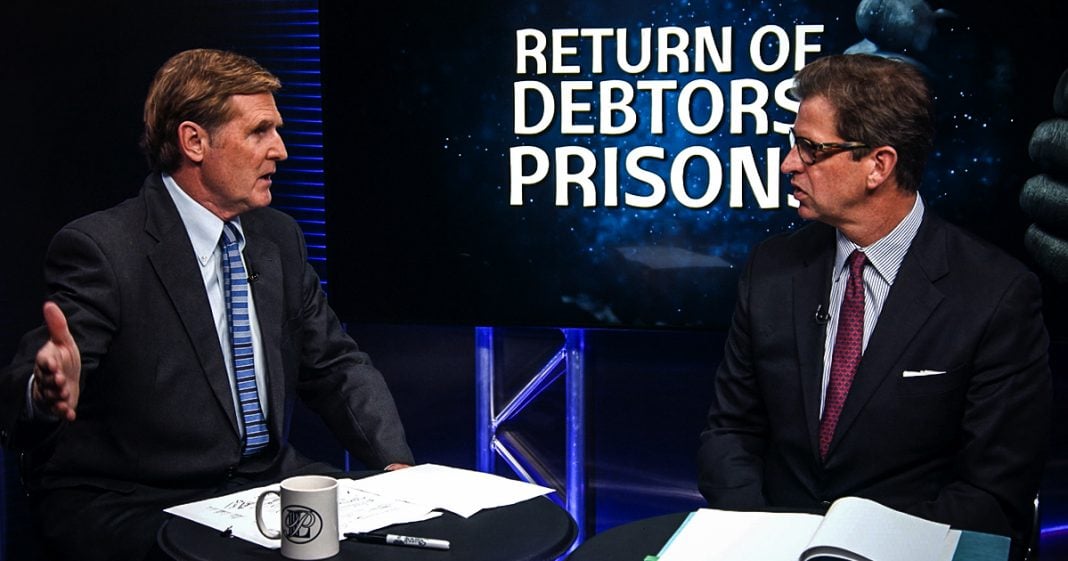 Most people probably believe that debtors’ prisons are ancient history, but since the 1970’s more and more American citizens have been thrown into jail over their debts. Ring of Fire’s Mike Papantonio and Peter Mougey discuss this issue.

Mike Papantonio: Most people probably believe that debtors’ prisons are ancient history but since the 1970’s the United States, more and more American citizens have been thrown into jail over their debts. And private debts, by the way. And in the last few years judges have increased the number of people being put into prison because they can’t pay their bills. According to a recent report by the ACLU, more and more American citizens are being thrown in prison by judges who say that private bills held by collection agencies is now a criminal offense which most legal experts agree is a clear violation of the Equal Protection clauses of the 14th amendment. But as the corporate stranglehold and America gets stronger, it’s becoming increasingly clear that corporations always get what they want. Very rare that they don’t get what they want. And right now, they want to put Americans in jail if they’re not able to pay their bills.

Peter, you know when I looked at this story, look at these headlines, I’ve been hearing this story for quite some time where for criminal offenses, the people that can’t pay child support, whatever it may be, it evolves into a criminal offense and they’re thrown in prison, in jail for that. But this is much different. This is somebody’s got a hospital bill for example. They can’t pay the hospital bill and they end up going to jail for it. The ACLU has followed this a long time and now thousands of cases of this happening. What’s your take?

Peter Mougey: They documented a lot of really horrific stories. What’s really happening is that this industry from a legal perspective, these huge firms that pay their lawyers almost nothing. It’s just a machine where they’re churning out claim after claim and then they send a notice to somebody that hasn’t paid their hospital bill or bounced a small check and the defendant doesn’t show up for the court hearing. If they don’t show up for the court hearing as you know, then the court enters an order and it can be contempt which can be criminal and then they don’t get the notice, they don’t show up, they get another notice of contempt, it goes on their record and then an arrest warrant is issued for failure to appear.

But think about the kind of people that are getting, that can’t pay their hospital bills. They don’t have insurance. They rent so they move a lot so it’s hard to find them. And then they get pulled over for a speeding violation.

Mike Papantonio: They get a warrant.

Peter Mougey: And they get thrown in jail and they can’t get out because they can’t pay the bail and this might all over be like you said, a hospital bill or some bounced check for a pizza or something ridiculous. And then they’re sitting in jail.

Mike Papantonio: Think about this. Would you ever believe that an inability to pay a bill like a hospital bill could end up, could land you in jail? But this takes cooperation. You see this is what everybody misses. This takes some cooperation with the prosecutors and with the judge. These are criminal prosecutors that are kind of helping in all this. Here’s how it works, you show up, you’re supposed to get a notice. First of all, they got to give you notice that there’s a hearing, right?

Peter Mougey: ‘Cause your lease is up.

Peter Mougey: Or you got evicted.

Mike Papantonio: It says, you’ve got to appear in court. They don’t appear in court after a post judgment where there’s already been a hearing. There’s been a default hearing. Yes, they have not paid the $1,000 that they owe the hospital. They’re in default so then they’re supposed to get a notice and it says, “Show up for your post default hearing.” They have a right to do that under due process. But the problem with the due process argument here is there’s never, it’s rarely even a showing that they got the notice. As you say, they could’ve move away. There’s any reason they might not have gotten the notice. And then the whole due process of what occurs in that courtroom as far as before you’re throwing somebody in jail. This doesn’t happen. I can just tell you something. This doesn’t happen without cooperation of really second rate, bottom feeder prosecutors, bottom feeder plaintiffs judge that handle these cases and bottom feeder judges.

That’s the only way this happens. Because a judge is always going to say, “Well wait a second, okay, give me a proof of notice. I want more than your word. I want to see something more significant.”

Peter Mougey: I was really troubled by the fact, I had no worth the idea that some of these companies actually contract with the prosecutors office. I had no worth idea that there was agreement between the bill companies and the prosecutors and that there was a quid pro quo and back and forth. That just seems to violate just not only common sense but to have the prosecutor in a criminal side to help actually pushing a civil claim through criminal means like failure to appear. That just seems like it turns it upside down.

Mike Papantonio: One thing is clear. One of the stories here, this is a very typical story that the ACLU uncovered. Woman she owed a hospital bill. She was deathly ill, had a hospital, matter of fact, she left where she was living to go live with her parents so she could recover. They supposedly send her this notice, you’re in default on the bill. You have to show up in court for a post default hearing. She doesn’t even get the notice. One night in her pajamas at here mother’s house, she’s in literally in her pajamas, knock on the door, they’re there to arrest her in front of her 12 year old daughter and eight year old autistic son, four year old son as well. They haul her away and she spends time in jail because she can’t even make bond to get out of jail.

The problem is, this again, I can’t say this enough, this doesn’t happen without really second rate, bottom feeder lawyers and judges being involved in this.

Mike Papantonio: Yeah. Look, I would say for 50 or 60 years, this type of thing could have been done but you had maybe you had more responsible lawyers. Maybe you had more responsible judges who weren’t willing to say, “Yeah, I’m going to go along with this.” Can you imagine a state paid prosecutor having a contract with a private entity, a debt collection? Yeah, I’m going to help you out. I’m going to throw these deadbeats in jail. That’s basically what this has come down to.

Peter Mougey: No, absolutely. It really doesn’t seem like that controversial that we should throwing people in jail. Another thing, another way to deal with is, you got to hold people accountable. You need them to show up for court. That’s pretty much common sense.

Mike Papantonio: But you got to give them notice.

Peter Mougey: You got to give them notice and even if they get notice, you have to have evidence but what a waste on our system that we’re sending police officers out to go arrest people like that lady. That you send a police officer over an unpaid medical bill. You take the resources from the county to go arrest her and then you put her in jail and you take her out.

Peter Mougey: It is. And she’s never going to pay back the bill.