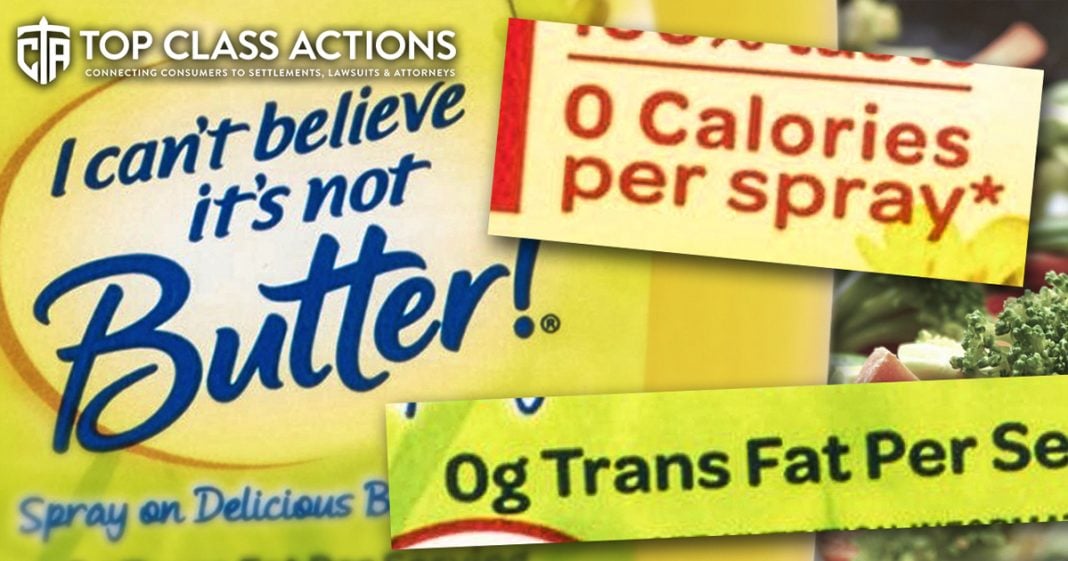 A class action lawsuit claims that Unilever markets its “I Can’t Believe It’s Not Butter” cooking spray as calorie free when it’s not. The I Can’t Believe It’s Not Butter margarine spray class action lawsuit says that the company is responsible for engaging in deceptive and unfair practices around marketing, advertising, and selling the product as containing zero grams of fat and zero calories. Ring of Fire’s Farron Cousins discusses this class action suit with Scott Hardy from Top Class Actions.

Farron Cousins: You know there’s a lot of food products, cooking products, all kinds of things out there that say that they’re low calorie, zero calorie, zero fat, whatever it is. They want you to know that their product is completely healthy, or so it seems.

When you actually look at the label, look at the tiny little serving size they get you, it’s more apparent that they’re lying about the actual serving or usage size, as compared to the calorie content of the product as a whole. That’s the problem we’re seeing right now with the I Can’t Believe It’s Not Butter cooking spray, that claims to be zero calorie, yet there manages to be almost 1200 calories per bottle of this stuff.

Joining me now to talk about this is Scott Hardy from Top Class Actions.

Scott, this seems to be another one of those stories where corporations can make these claims which technically are true, but also somehow technically not true. There are calories in this stuff yet because they say the serving size is one short spray, they get to say there’s no calories.

How does that even work? I mean this is just so ridiculous sounding.

Scott Hardy: Yeah, these kind of class actions are interesting because we’re holding manufacturers accountable for what they’re putting out there. Because as you said, this is supposedly a zero calorie spray. I think, is it like water? How is there flavor in there? And then you look at the bottle and you see there’s almost 1200 calories, there’s 124 grams of fat in every bottle. That’s not zero calorie, that’s not healthy.

And when you think about the test that they use where they say, “All right, well a zero calorie spray is less than half a second.” I don’t know about you, but if I’m using this product or something similar, there’s no way that I can go ahead and just do a half second spritz on my food and have any sort of flavor, if it’s even possible.

When they do these tests, they’re doing it in lab environments, they’re actually controlling the sprays with robots. They’re using an actual scientist to control it because they have to be so doggone accurate to get that “zero calorie” number, it’s crazy.

Farron Cousins: Part of the draw is people walk past it in a grocery store, they see the commercials, and it says zero calories. And if you’re trying to be more health conscience, trying to eat a little bit more healthy, you’re absolutely going to grab the zero calorie product as opposed to the product that does not say that.

The real usage size is what people need to be focused on. Are you gonna hold that nozzle down for half of a second? Or are you gonna do what a normal person does and make sure that everything gets sprayed. You’re talking two, three seconds possibly, in which case again that entire bottle has close to 1200 calories in it. They have to go somewhere and they’re going on your food.

Scott Hardy: Yes exactly, 124 grams of fat and no one in their right mind who is actually using this product is just going to sit there and put a little spritz on their food. They’re gonna use it liberally because they’re going off the manufacturers suggestion from the label on the bottle which says zero calories. So they’re thinking, hey, I’m dieting, I’m working out, I’m doing my best to go ahead and be healthy and then they lather all of this fat on their food, not knowing that it’s actually quite unhealthy for them and it could be very bad for their health unless they actually use the correct portion size which is exactly what you mentioned, but the manufacturer doesn’t even encourage that.

Farron Cousins: And even when you watch the commercials for some of these products, you’ll see them spraying it and it is far longer than a half of second spray. Typically, it does range between the two and four second mark of them spraying this in the commercials. Now this is something we have seen, not just with this product, we see it with products across the board.

They’ll in the commercial give you way more than what the actual serving size is ’cause people are more likely to see the commercial than they are to turn around and look at what the product actually requires. And again, when you’re talking about any kind of percentage of a whole, in terms of calories or total fat or whatever, if its not equal to one or more, they are allowed technically to say zero, but by deceiving the consumers and making them think the entire product does not have that in there, that’s when they run afoul of that particular law and the way the laws are, depending on the state, here in the US.

Farron Cousins: With these lawsuits, right?

Scott Hardy: Exactly, and they don’t even declare that it’s 40% vegetable oil and so everybody knows that vegetable oil is not calorie free but they have to bring the flavor from something and so they go ahead and put a lot of vegetable oil in the spray, which adds the flavor also adds the fat and adds the calories, and those things should be declared to the consumer so they know what they’re putting in their bodies.

Farron Cousins: Absolutely. There’s more information available about this on Top Class Actions dot com. There’s also a link to this story in the description of this video.

Scott Hardy, Top Class Actions, thanks for talking with us about this today.