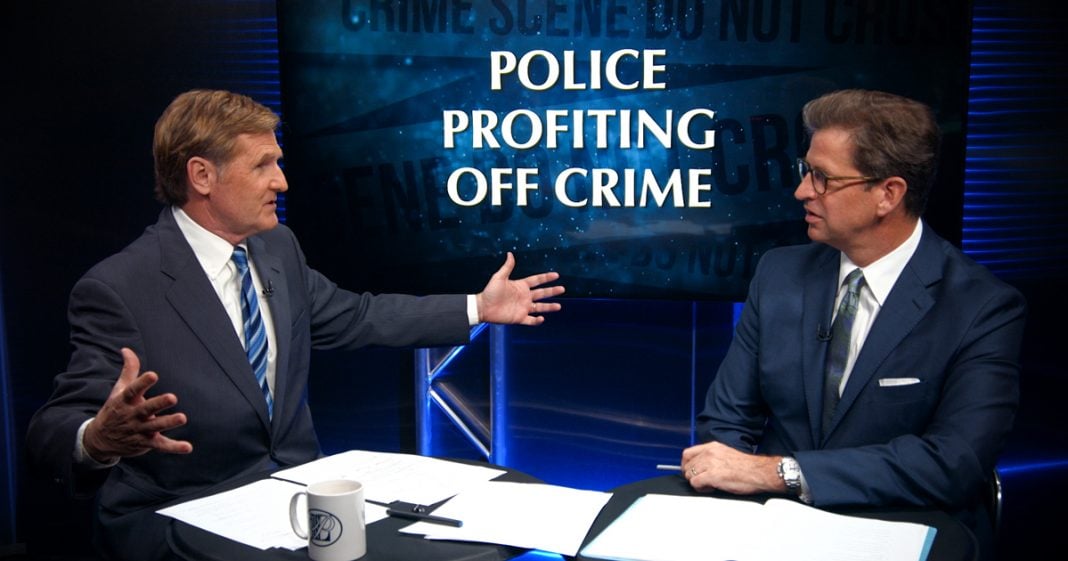 Police officers in Alabama, they found a way to make a quick buck. They’ve begun seizing assets of individuals that they take into custody, even if those people aren’t charged with a crime. Ring of Fire’s Mike Papantonio and Peter Mougey discuss this issue.

Mike Papantonio: Police … This is crazy. Police officers in Alabama, they found a way to make a quick buck while they’re supposed to be upholding the law and protecting citizens. They’ve begun seizing assets of individuals that they take into custody, even if those people aren’t charged with a crime. It doesn’t make any difference if there’s a conviction. They say, “We caught you. There’s no conviction, but we’re going to keep your property anyway.”

Peter Mougey: It’s absolutely crazy. The thought behind this, according to the Alabama police departments are we need to motivate our policemen to go arrest people by saying when you arrest them … Keep in mind, arresting isn’t convicting. It’s just arresting them. Civil asset forfeiture, and then we’re either going to throw it in the state coffers, or keep it in our local budget.

But here’s the part that just is scary to me. Morris Dees at the Southern Poverty Law Center conducted a study, and he’s a champion for the underrepresented.

Mike Papantonio: Yeah. Morris, by the way, wrote the forward to my first book I ever wrote called The Search of Atticus Finch.

Peter Mougey: Dedicated his entire career to representing people without a voice. Their study, 25% of cases of civil asset forfeiture never resulted in even charges. Not convictions. That charges were ever filed. So we’re going to take their money-

Mike Papantonio: In other words, there’s probably cause in their mind. There are no arrests. We’re going to take … Well, there’s arrests. There’s an arrest, but there are no charges after the arrest. They make the arrest and they say, “Oh, boy, we really screwed the pooch here. We don’t even have enough to charge them with.”

Mike Papantonio: Yeah. Well, the business model is that they’re giving incentive for these police officers to … Now, here’s what’s interesting. If the police officers or the agency learns that the money’s going to the federal government, that it doesn’t come back to them … They love these boats that they get, and cars, and helicopters. All this stuff that they’re able to seize. This is how they build their SWAT armies, where they dress up like ninja soldiers and walk around with AK47s. They get a lot of this stuff from these kinds of seizures.

Peter Mougey: $2 million from the practice. $2 million they made annually.

Mike Papantonio: Okay. I think it’s probably more than that in most places, but, look, isn’t this this real issue? You’re giving them an incentive so that they can get this stuff, but if we really think about it, the public policy is that police are servants, and they take an oath of integrity. They take an oath to uphold the law. They don’t take an oath to say, “Hey, I’m going to get filthy rich by taking your stuff.”

Peter Mougey: Right, I’m going to fund my agency if I take your car or your boat when I arrest you, and forfeit your assets without any burden of proof. That just undermines are whole system.

Mike Papantonio: So you’ve got boss hog driving around in the Porsches with sirens on top.