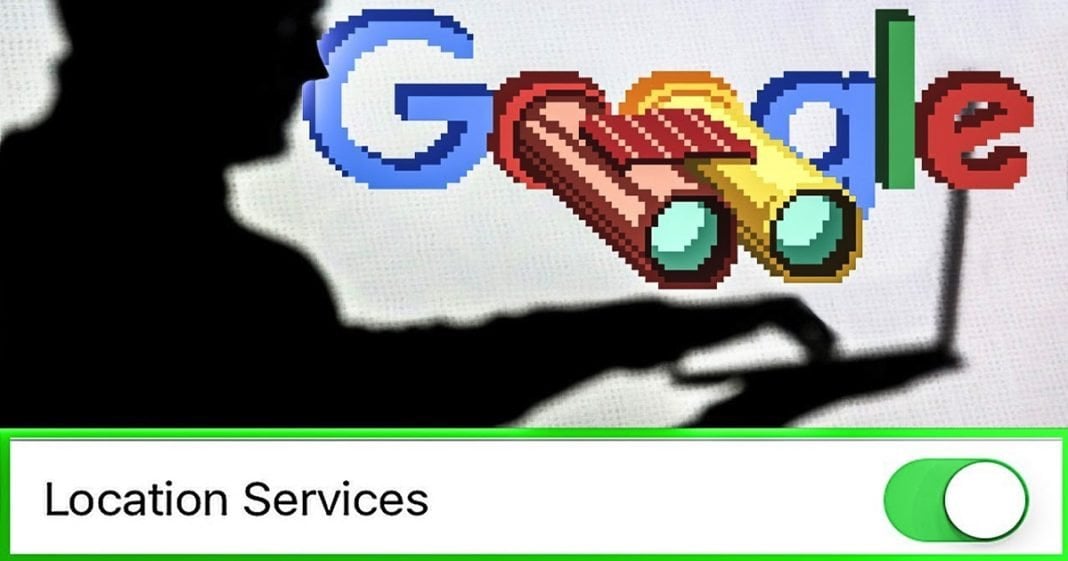 Google owns you, whether you want them to or not, whether you’ve given them permission or not, they not only own you but they know everything about you, everywhere you go, even if you think you have done things perfectly with protecting your own privacy on your cell phone. Ring of Fire’s Farron Cousins and Mollye Barrows discuss this issue.

Farron Cousins: Google owns you, whether you want them to or not, whether you’ve given them permission or not, they not only own you but they know everything about you, everywhere you go, even if you think you have done things perfectly with protecting your own privacy on your cell phone. A new story came out, an investigation by the Associated Press, that basically shows that no matter what you do, Google knows what you’re doing. There’s almost nothing you can do if you have a Google app on your phone or an Android phone to prevent them from tracking everywhere you go.

Mollye Barrows: I know. Google’s better than the Secret Service, aren’t they? They can follow you no matter what and they do it all under the guise of convenience. They’re relying on your smart phone that you keep in your pocket. This is a scary study. I guess it stemmed from a Berkeley, California student who was participating in another survey of sorts to help with some city planning and tracking people and realized that she was getting pop-up ads for places that she had visited when she had already turned her location app off, or that part of it on her phone can’t track my location, but sure enough, she was still getting indications that they were and that’s when she realized that they were using all these various loopholes essentially and hiding behind things like, “Well, if you really want to stop Google from tracking your location, you’re supposed to go to the web and app activity section.”

At any rate, they don’t make it easy and then every time somebody calls them out on it, Google says, “Oh, well we didn’t realize. We’ve been completely transparent. All you have to do is take X, Y, and Z steps, or get this map and find the X that marks the spot and then we won’t track your data, but every time you do that, then there’s another way that they get around it.

Farron Cousins: Right, and this AP investigation actually did everything that Google said you have to do and it didn’t work.

Farron Cousins: They did everything exactly what Google told them to do and it was still able to track their devices, and this, just so people know again, any Android phone comes preloaded with Google and all of that so you have it on there, it is tracking you. If you have the Google app, the Google search app on your phone, whatever kind of phone it is, it is tracking you. If you have Google maps, it is tracking you. And as you pointed out, they’re using this in a lot of … well they’ve also … they’ve been using it with law enforcement giving them information so they can help track people, which you know, there’s some constitutional issues with that.

Farron Cousins: Like, “Hey, you went to Target eight times yesterday because you didn’t turn your app off, so we’re gonna start sending you all of these Target ads, Target coupons, put you on the Target mailing list,” just silly things like that but they make money off that.

Farron Cousins: Now there’s a big difference between that, we’re targeting you for ads, and we’re also helping law enforcement try to track down these people that we think might be criminals. So yeah, there’s the unethical part of tracking you and then there’s the unconstitutional part of violating your rights to privacy when it comes to handing this over to law enforcement. A lot of screw-ups here on Google’s part.

Mollye Barrows: Well, and it’s so interesting and I think again, you don’t see the public getting up in arms about it because so much of what they do, they violate your civil rights and they put a big red convenient bow on it. You’re like, “Oh, I’ll take that present. Sure there might be a snake inside that can come to bite me later on, but gee, it’s making my life easier now.” Hey, I do like those shoes that are being pushed on me by these Google ads because they’ve been tracking my shoe preferences or my store preferences.

I think there’s an element of convenience, or like we were talking a moment ago, if you’re out of town and you say places to eat near me, or concerts near me, immediately Google wants to know where’s your location? And it makes sense, but then they’re not being completely upfront about, “Oh, by the way, you need to go back and turn that off or even if you have turned off location, we’re still gonna use this roundabout way to track you and then we’re gonna sell that data to someone else.”

You and I were talking about for instance if you’re stuck in traffic. So you go to Google Maps to see what’s going on with traffic and it turns out that the reason they even know that people are stopped in traffic is because they’re monitoring devices and where they’re going. It’s convenient and people probably don’t want to be up in arms and scream that their civil rights are being violated until the day comes when they decide to use that information in a way that could harm them.

Farron Cousins: Yeah, and that was really … I just learned that not too long ago about the fact that they are able to monitor the Google devices, Google apps and depending on how fast they’re moving on any given roadway that’s how they determine, “Oh, this traffic area is dark red, it’s not moving at all. This one’s green,” but it’s based on how fast they’re going. Again, I have location services turned off other than for the locate my phone so that my family knows where I am. That one, the find my friend thing.

Farron Cousins: Not that they need to track me all the time, but it’s helpful so that they know.

Mollye Barrows: Absolutely. I think of CSI episodes where people get kidnapped and you’re like, “Hey, let’s track the phone.”

Farron Cousins: But even if you have it all turned off, even if you do what Google says, even if you follow all the rules and all the steps, they’re still tracking you and that’s where the problem comes in, but listen, we’re out of time for today.