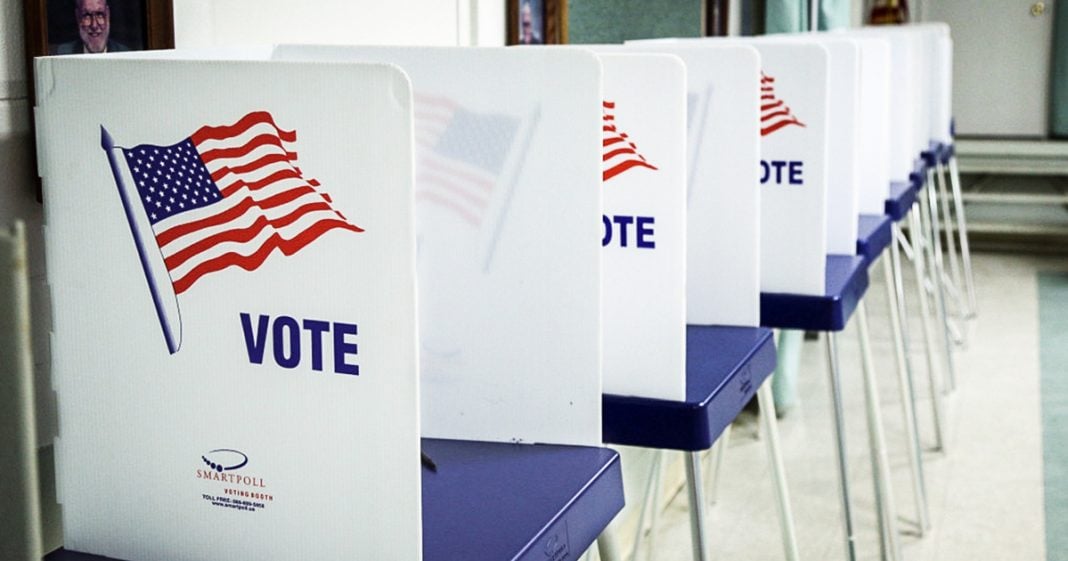 Thanks to partisan gerrymandering in states like South Carolina, Republicans were able to prevent the Democrats from getting a super majority in the US House of Representatives. The gerrymandering in South Carolina was so bad that even though Republicans only got 50.3% of the total votes, they still walked away with 10 of the state’s 13 seats. On top of that, a three-judge panel had previously (twice, actually) ruled this districts unconstitutional but they were still used anyway. Ring of Fire’s Farron Cousins discusses this.

Over the last few days, we’ve talked a lot about some of the Republican cheating tactics, such as voter suppression, faulty voting machines, hiding voting machines, as they did in the state of Georgia, not providing precincts with enough power cords to be able to actually plug in the voting machines that they did have, but there’s another form of cheating that Republicans also engaged in this year, and that’s one that hasn’t been talked about enough, and it’s one that’s going to continue to cost Democrats unfortunately in the future, and that is gerrymandering, specifically gerrymandering in the state of South Carolina, where Republicans won 10 out of 13 of the districts in South Carolina, 10 out of 13, which is remarkable considering they only had 50% of the total vote in the state. They won half the votes in the state. The Democrats had 48.4% of the vote. Republicans had 50.3, and they still won 10 out of 13 contests.

You know how they did it, right? They did it by using a gerrymandered district map that twice in the past, the most recent was in August, a three-judge panel ruled was unconstitutional because it was so partisanly gerrymandered to 100% benefit Republicans. Unfortunately, that same three-judge panel at the time said, “Well, there’s probably not enough time to redraw it, so go ahead and use it this year, but then you can’t use it again after that. You got to redraw your maps.” If you’re saying it’s unconstitutional, then it shouldn’t be used. Allowing that to go forward itself seems unconstitutional, especially when you had states, Pennsylvania’s one of them, that was forced to redraw their districts on short notice to prevent gerrymandering from giving one party complete control of the state. It is doable. It is possible, and when you’re only dealing with 13 districts, not that hard to draw 13 lines on a new map and get it approved without having to gerrymander.

So yeah, I do partially blame the three-judge panel for allowing it to go forward, but at the end of the day, the ultimate blame lies on the Republicans. They’re the ones who drew these districts. They’re the ones who got them approved initially, and they’re the ones who put them in place because they knew, according to documents obtained, they knew it was going to help them. Those are actually documents that came out during the hearing about the unconstitutionality of these district lines. The document said, “We know this is going to benefit us. We’re really happy about this,” and the judges still said, “Oh, you’re so awful. Go ahead and use them one more time, but then don’t you dare use them again. You got to redraw them after that,” so what do you expect?

50% of the vote in South Carolina elected 10 out of 13 of their districts for the Republicans. Gerrymandering is a very serious problem, and unfortunately it’s been a problem since the early days of this country. We have to come up with a better way. Politicians, and unfortunately, this does mean from both sides, because it’s been both sides, we have to get it out of their hands, because as long as somebody with a vested interest in these districts, as long as that kind of person is allowed to redraw them, they’re always, regardless of party, going to draw them to benefit themselves and harm the opposition. As a country, we have to find a better way. Until then, get used to gerrymandering, and get used to one party control in certain areas of this country.