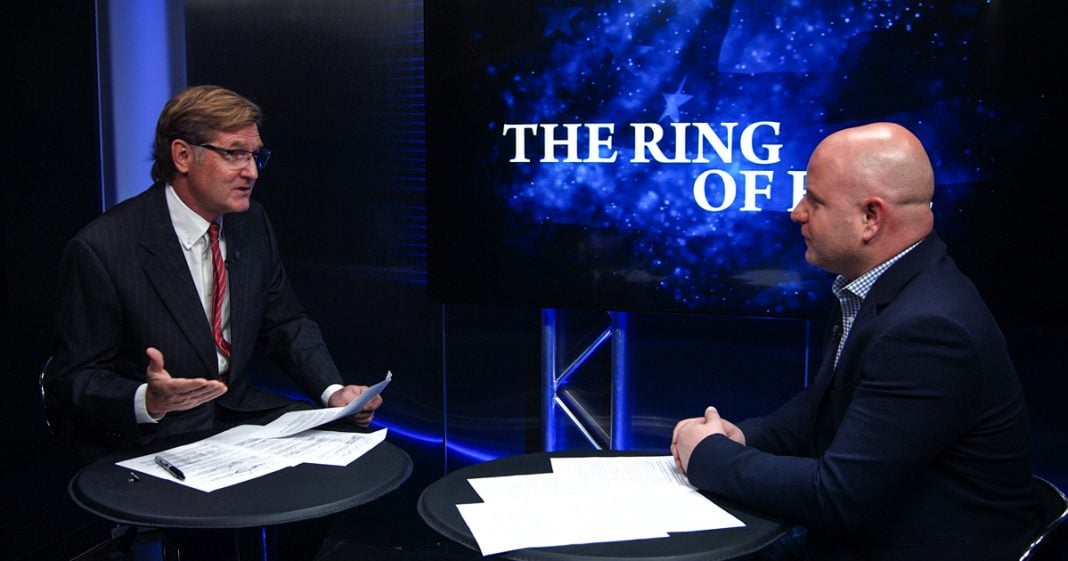 It appears that regulators and politicians have learned absolutely nothing from the financial meltdown of 10 years ago, as they are preparing to once again change the rules for big banks back to what they were prior to the crash. We’ve recreated the exact same scenario that caused the last economic meltdown, and that’s likely where we’re headed now. Ring of Fire’s Mike Papantonio and Farron Cousins discuss this.

Mike Papantonio: The Federal Reserve’s is getting ready to further deregulate the biggest banks in the United States showing that they didn’t learn anything from the last financial meltdown 10 years ago that they caused, oh by the way, that they caused and that there were no regulations, by the way, nobody was looking over their shoulder and they knew they were stealing from the American public. Our firm handled these cases after the burn down. We saw documents to where you had Goldman Sachs. You had Shearson Lehman. You had Wells Fargo. You had all of them. All of them talking about this is bad, something bad is getting ready to happen to people that are holding this paper or holding these stocks and we got to get out of it.

And so now, again, Dodd–Frank comes out and says we need to fix that. Well, they tried to fix it and now we see the Republicans and the Democrats, let me point out. This is very much a democrat issue. So now what’s happening?

Farron Cousins: They’re trying to change the rules. They can do this through the Federal Reserve instead of having to get legislation passed by just altering it instead of full on making new rules. So what they’re trying to do is redefine what a small bank is. And to them a small bank is going to be under the rules they’re about the put in place and yeah they’re going to put them in place. A small bank is if you have less than $700 billion, you’re a small local community bank and you don’t need to worry about Dodd-Frank or any of that. $700 billion.

Mike Papantonio: In other words, if you have $699 billion dollars …

Farron Cousins: You may as well be a mom and pop bank at that point.

Mike Papantonio: You’re a mom and pop operation according to these folks. This is like a corner bank if you got $699 billion. What’s happening is and this is … it’s all about liquidity. Dodd-Frank, after we saw the thieves, the Wall Street criminals who by the way were never prosecuted by Obama. Were never prosecuted by Bush. Never prosecuted … look at this point it’s too late really. The statute’s run on a lot of it.

So, these criminals, the Wall Street Armani suit criminals, steal billions, trillions of dollars. Actually the economy lost what the number’s anywhere between you hear $2 trillion to $8 trillion. Sometimes when you see the numbers and somebody explains how the economy lost that much money, it’s pretty compelling. But it was all about liquidity. The banks did not have the liquidity to do the things they were doing, right?

Farron Cousins: Exactly. It’s a lot like the casino where if you go to cash in your chips at the end of the night and they say well we don’t have any cash here. You can’t do that. There’s tighter regulations on a casino saying that if you have these outstanding liabilities out there meaning a person playing poker, you have to be able to cover what they claim. The banks, they don’t even have that.

So if you’re out there and you’re a bank and you are essentially gambling with somebody’s mortgage in many cases with the burn down they were betting that the mortgages were going to fail. And they don’t have to have the assets, the liquidity to back up any of their other investments.

Mike Papantonio: Yeah. Example, one of my law partners, Peter Mougey, he handled a lot of these banking cases after the Wall Street thieves stole that money and he just finished a case down in Puerto Rico. Incredible. When an arbitration panel comes back and gives you $19 million, you know something is really upside down because that’s what happened. It’s the same deal. Banking, there was a liquidity issue. The bank understood we had UBS, you know, UBS, here’s what they did.

They knew they were holding onto a bunch a bunch of junk bonds. They knew that the bonds that they were holding were totally worthless and they built a special sales team that UBS and Santander, another bank was involved, that they built a special sales team that specialized in selling the junk that they knew was junk, but they were telling mom and pop investors that it’s great. “As a matter of fact, we bought it.”

No, we didn’t buy it. They were selling it secretly while they were selling it to mom and pop investors. You had people lose their entire pensions. There are cases where people they had everything in this. They put all their life savings, their retirement savings into these scam. And the banks knew exactly what they were doing. It’s so specialized they put a special team of liars and thieves together to sell this paper.

Farron Cousins: And what’s really interesting here is again, the Federal Reserve which is actually Steve Mnuchin was the Secretary of the Treasury, he’s one of the guys who pioneered the frauds that led to the meltdown. Again, no jail time. Kamala Harris was the prosecutor in California, didn’t want to touch him. Now he’s treasury secretary.

We’re making every single one of the same mistakes that we made as a country before the 2007 burn down. The exact same. We’ve set it up the same way. Massive deficit, huge tax cut package, deregulating the big banks …

Mike Papantonio: Smoke and mirrors in the economy.

Farron Cousins: And it’s going to lead to the same results.

Mike Papantonio: Well, okay, here to me this is the story … I can’t stop the analysis here. Here you had one fed governor, her name was Lael Brainard. She said the obvious. She said you know what, we’ve been through this before. The reason for Dodd-Frank is to avoid it again and all you guys, the rest of the men on the panel, everybody votes for it. Everybody says well you know and interestingly enough they all come from the industry.

And after they leave this position as a fed governor they’ll go back to the … understand Bernie Madoff, you understand this is his sweet spot. This is a Bernie Madoff kind of deal where you have the worst of the criminals in the business that are actually in charge of regulating.

And the other part of it, I want to know your reaction to it. You mentioned just a second … you talked about the fact that we could have done something about the guy at the top of the heap. Talk about that a little bit. But we didn’t.

Farron Cousins: Yeah, right. Kamala Harris, out there in California, the chief prosecutor … similar to all the other stories we’ve seen with opioids with Eric Holder. They have all this information. They know that he did wrong. He was engaging in this robo signing of the mortgages, making fraudulent claims with these, foreclosing on people illegally caused major housing damage to the market out there in California.

Mike Papantonio: Kamala Harris had all the information.

That is part of the new … it’s not new anymore. Actually, Bill-

Farron Cousins: It’s the mainstream basically is what they are now.

Mike Papantonio: … Bill Clinton started all this. You remember Bill Clinton said, “Well, we can all get along. We don’t have to always be on the side of the consumers. We can bring Wall Street into our fold.” And when that happened the Democratic Party started crashing and burning.

Farron Cousins: It did. And we have too many holdovers. They weren’t a part of it back then, but they have that same mentality. And unfortunately, Kamala Harris is one of them and that’s why we’ve actually tried to see her … or not try to see her, we’ve seen her try in the last few months try to take on these more progressive stances saying, “Well, Medicare for all, I do like that now.”

Mike Papantonio: She did nothing.

Mike Papantonio: She did nothing at all when she had the opportunity time and time again on cases just like this. So, now where are we? Now we have a bank that can declare, “We only have $699 billion so we don’t have to fall under Dodd Frank kind of regulations and you can’t come look at our liquidity the way that you should.” They can come and look every two years or something like that. By then it’s game over. If a bank engages in the kind of conduct that they did in the first burn down, it’s game over in two years.