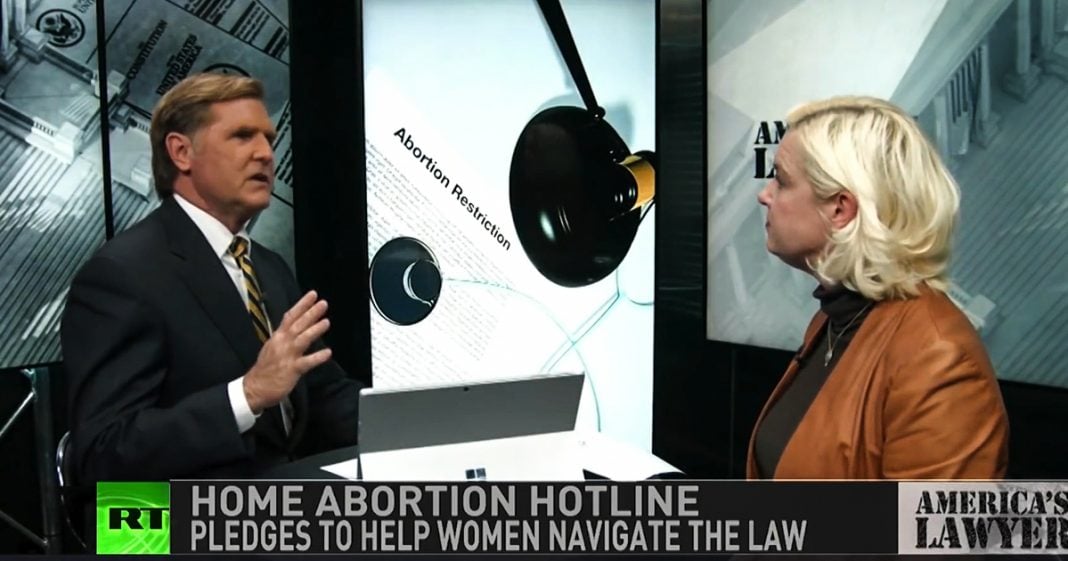 Via America’s Lawyer: Mike Papantonio has a discussion with Legal Journalist Mollye Barrows on a new legal advice hotline dedicated to helping women who face prosecution for home abortions.

Mike Papantonio: A home abortion hotline pledges to help women navigate the law where advocates and attorneys are on call to help women who’ve been questioned by police over self-induced abortions. Joining me to talk about this is Mollye Barrows, legal journalist for The Trial Lawyer Magazine. I suspect if we start seeing more conservative movement by the court we’re going to see a lot more self-induced abortions-

Mike Papantonio: … so this discussion about how women are affected by it becomes pretty important. Tell us a story.

Mollye Barrows: It’s extremely interesting, and you nailed it because when President Trump was campaigning he said he was going to be looking to appoint justices to the Supreme Court that were anti-abortion. That’s exactly what he’s done although we haven’t seen them making any decisions that would necessarily revoke current rights. There is this new legal group called SIA Legal Team made up … more than half a dozen staffers. Basically they’ve recently established a helpline to help women who are being prosecuted under a variety of laws and essentially address somehow self-managed abortions.

Mike Papantonio: Mollye, how is it different from a typical abortion case where the state or the feds get involved where there’s some improper process in abortion maybe in a clinic? How does it differ for women with these self-induced abortions?

Mollye Barrows: It’s a good point, good question because basically the law covers them legally with protections if they go to an abortion provider, a legally licensed medical doctor who’s an abortion provider. If they provide it for themselves, there’s a whole variety of laws that these women can be prosecuted under. 35, 36, 37, more than 35 different states basically have some sort of law that addresses this, and seven states have laws that outright ban self-induced abortions. So some of these laws that these prosecutors are going after women to basically hold them accountable for having a self-induced or self-managed abortion aren’t even laws that were created to address abortion to begin with. It’s things like tampering with a corpse, or abusing a corpse is how they put it, fetal homicide statutes as well as practicing medicine without a license.

Mike Papantonio: They’re doing a pigeonhole prosecution. We don’t have it clearly on the books, so let’s pigeonhole this.

Mike Papantonio: First of all, thank goodness there are legal teams out there that are saying, “We’re going to pay special attention to this.” Who are they? Where are they?

Mollye Barrows: Basically, I’m not sure what city in particular that they’re located in, originated it from, but they have a network that’s around the country. They basically find pro-abortion attorneys that are willing to be a part of this hotline, so this hotline has been established. If a woman anywhere in America feels like that they’re being unfairly prosecuted or that they need some kind of legal assistance to combat these charges, like you said, these pigeonhole charges, then this hotline is available to put them in touch immediately with somebody who can advise them, walk them through it step by step. If they can’t call, there’s also an encrypted website that they can submit their question as well as some encrypted text messaging. So this is a network of attorneys, eight staffers for this particular legal team, that there’s a network of attorneys across the country.

Mike Papantonio: It doesn’t take a rocket scientist to figure out that as we move more and more to that conservative edge on women’s rights to be able to make determinations about their own body, this is going to be more important. But already there’s been some higher profile cases here, hasn’t there?

Mollye Barrows: Yes. It’s interesting because a lot of these issues were brought up in a Mother Jones article. This particular reporter had covered a case in Utah involving a 17-year-old girl who’d been prosecuted basically under the fetal homicide statute because she had gone to a clinic, driven almost 200 miles to go to a clinic to get an abortion. They told her she was too far along. So she went and hired someone to be her in order to miscarry and lose her child. She spent, I believe, four months in a juvenile detention for solicitation of murder, which is unbelievable to me.

There are also some other cases as well. A 46-year-old woman in Virginia, they found remains of a fetus in her backyard. They were going to prosecute her as well but then the SIA Legal Team got involved and managed to convince prosecutors that there was not a crime here. So there’s just other examples. They say that they’ve got 21 cases throughout the country including Arkansas, Georgia, Idaho, Indiana, and Tennessee, and they suspect there are even more cases out there because a lot of people are probably just doing plea deals and not necessarily … it’s not being reported as being targeted.

Mike Papantonio: That’s where we’re going to start seeing the Supreme Court taking little bits, little cases that seem insignificant at the time. It may be that Idaho or someplace like that does what I call a pigeonhole prosecution. That is to say, there’s nothing really on the books about this woman’s right to do what she did, but they’re able to say, as you pointed out, something as bizarre as unauthorized practice of law. I mean-

Mike Papantonio: … of medicine, taking your own child or handling a corpse, whatever it may be.

Mike Papantonio: We ought to spend another segment taking about that, but it definitely is both. Thank you for joining me.