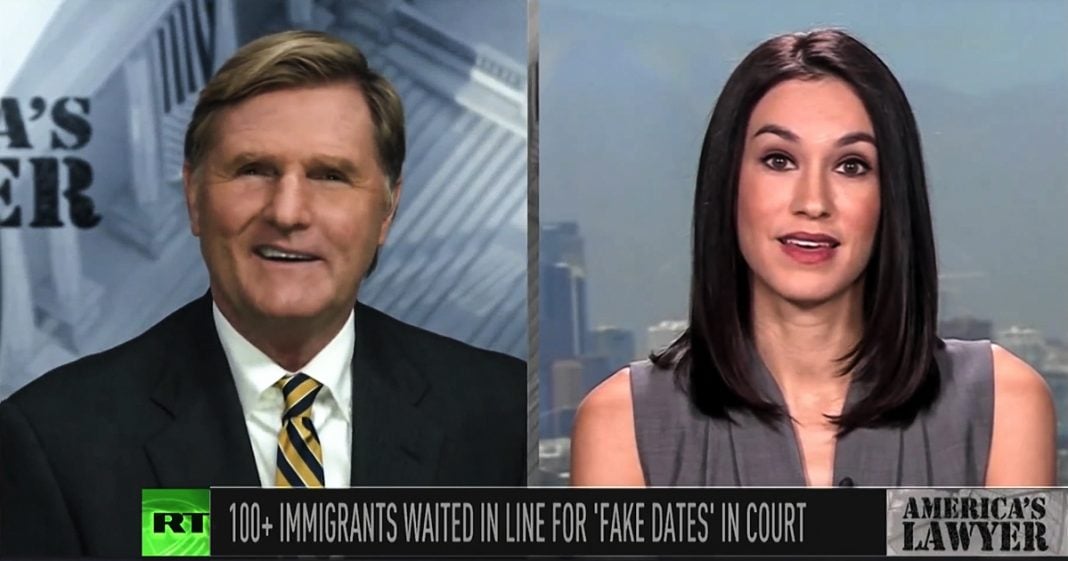 Via America’s Lawyer: Mike Papantonio is joined by RT Correspondent Brigida Santos to discuss how hundreds of Immigrants arriving to court carrying paperwork ordering them to appear before a judge found out that their hearing dates were fake.

Mike Papantonio: In the last few months, undocumented immigrants across the country have been tricked into showing up for fake court dates that were purposely set up by Immigrations and Customs Enforcement. Joining me to talk about this is RT correspondent, Brigida Santos.

Brigida, give me the details of this story.

Brigida Santos: Well, Mike, US Immigrations and Customs Enforcement has been sending undocumented immigrants notices to appear in court with dates and times that have never actually been scheduled by the courts. Now, the notices also contain dates that don’t exist, like the 31st day of a 30 day month, and times like midnight, when courts aren’t even open.

As a result, hundreds of immigrants have shown up at courts across the country for no reason, and since this practice began in June, abnormally long lines have been reported at immigration courts in at least 10 cities, including Los Angeles, Chicago, Boston, Orlando and Atlanta, to name a few.

Mike Papantonio: All right. Well, I’m wondering, as you said, this started in June. That’s when the Supreme Court issued a ruling in a case that was specific. Sessions was a proponent of the ruling. How does that case tie into the fake notices here? How does all that tie together?

Brigida Santos: Well, since 1997, judges have been able to cancel removal orders of non-citizens who meet certain requirements, which include being physically present in the US for a continuous period of time, seven years for legal permanent residence, and 10 years for non-legal permanent residents. This case focused on whether the government could stop an immigrant’s time from accruing by sending them a notice to appear in court that did not specify a time, date and place for deportation proceedings. A lot of times, they just say the information is to be determined.

And ultimately, the Supreme Court ruled that the time stop rule could not be triggered by such a vague notice, because that meant the notice didn’t actually meet the legal definition of a notice to appear. And since then, the court … Since the court issued this ruling at the end of June, ICE has been sending immigrants notices to appear with fake dates on them just to ensure that they accrue enough consecutive time to become eligible to deportation relief. So, that’s this is about.

Mike Papantonio: Okay. So, I mean, anybody watching this has gotta ask, “How can this be legal?” I mean, obviously, that’s the first part of the question. Is there anything immigrants can do to avoid showing up to fake court dates? I mean, anybody listening to this story’s gotta say, “Well, those are two things that certainly should come to their mind.”

Brigida Santos: Well, it’s not clear whether this is legal, but someone’s gonna have to challenge this new round of dysfunction in the courts to determine that. Now, until then, the Department of Homeland Security, and the Department of Justice say that they’re working through, what they’re calling, logistical errors of the Trump administration’s controversial immigration policies.

As for what immigrants can do, immigration lawyers have already been confirming whether these court dates are real before they send their clients to court. But immigrants without representation have been instructed to call the Immigration and Customs Enforcement hotline to match their registration numbers with court dates that are listed on the notices. Still, many immigrants are showing up regardless, even if they think these dates are fake, because they’re simply afraid of having a deportation order that’s issued without them being present. They do not trust the system, and for good reason.

Mike Papantonio: Well, one thing that they were caught doing, something similar is, a lot of times when people show up for these hearings they have with them their family members, and maybe friends and family members that show up and they were using that as a way to identify those people and say, “Well, we got you. You’re in line. We’ve been looking for you. You don’t even qualify for this court hearing. You’re here illegally,” and they would use that as come on to get people to show in these kinds of lines.”

Of course, you’ve seen that with other kinds of cases too, where the law enforcement will set some kind of trap to have people show up at a party, or whatever it may be, and there they’ve got them. So, early on there was some discussion about whether or not this was one of those rouses to have people show up.

Is there any … What do you think are the chances of anything meaningful coming out of this, as far as the government really changing the way they’re doing this? My guess is that we’ll see, really, nothing actually happen. And based on the way that the American attitude is going about immigration right now, it’s not like most people would pay attention to that, or be concerned about that, unfortunately. What’s your take?

Brigida Santos: Yeah, I think people are concerned and they want to see changes made. But again, if the Trump administration is now using the Department of Justice to send out fake notices, and it’s gonna come down to whether somebody else is gonna next challenge that in the Supreme Court, then we’re just gonna see this cycle where they keep creating new loopholes and ways to treat immigrants this way.

Mike Papantonio: Yeah, that’s the way I see it too. This doesn’t go away with any court ruling.

Thank you for joining me, Brigida.