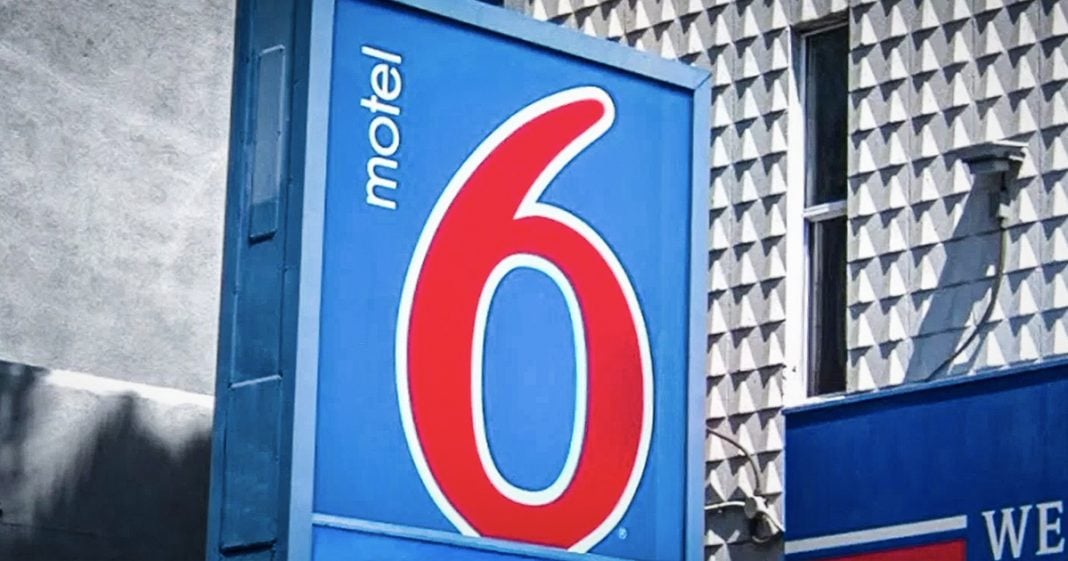 The popular budget hotel chain Motel 6 has agreed to pay millions of dollars to victims after it was revealed that they have been turning over their guest lists to ICE agents. This move goes against privacy policies put in place at both the company and under the law, and has also managed to destroy the lives of countless people. Ring of Fire’s Farron Cousins discusses this.

The popular budget hotel chain Motel 6 has agreed to a settlement of $7.6 million that was the result of a class action lawsuit brought by Hispanic plaintiffs against the hotel chain who claimed that the hotel was giving their guest lists over to ICE officials, Immigration and Custom Enforcement officials, so that they could interrogate and deport if necessary people who were staying at Motel 6 locations. Now obviously, the hotel doing this violated the privacy rights of these people staying in the hotel. Yes, you do not have to be a United States citizen for the constitution to apply to you. If you are in the United States, it applies to you and that’s something a lot of people don’t actually understand.

You are protected by the laws of the United States, and you are subjected to the laws of the United States. For Motel 6 to turn over their guest list anytime they saw a Hispanic person come in, sending to ICE officials saying “Hey, here’s someone you need to check out,” yeah, that is hugely illegal, but that is what they were doing. According to reports, there were Hispanic guests that were interrogated out in the parking lot, in the lobby, in front of other guests, humiliated, embarrassed. They were legal citizens, yet they were forced to basically do whatever these ICE officers told them under the threat of deportation. We have become lawless with regards to our immigration policy here in the United States and now we’re starting to find out that its’ not just ICE.

It’s not just the Trump Administration. There are also corporations involved in this. Motel 6 is likely not the only hotel chain that’s out there turning over their guest lists to immigration officials. I have no doubt that if we had full investigations into this, we would find other hotel chains doing the exact same thing. They think they’re helping out. They think they’re gaining favor. But what they’re really doing is violating the constitutional rights of both citizens and again believe it or not noncitizens. If you’re in this country, you are protected by that constitution. That’s something that these hotel chains don’t seem to understand and they believe that they’re allowed to violate the law just because they think someone else is violating the law.

If ICE officials need your guest list, they will come into your hotel with a subpoena, with a warrant, or with a court order of some kind. There is no need to voluntarily hand it over risking the rights of everyone staying in those hotels. That’s why this hotel chain is now going to have to pay out millions of dollars to the countless victims that they turned into criminals even in cases when these people had done absolutely nothing wrong, except for picking the wrong hotel to go sleep in.