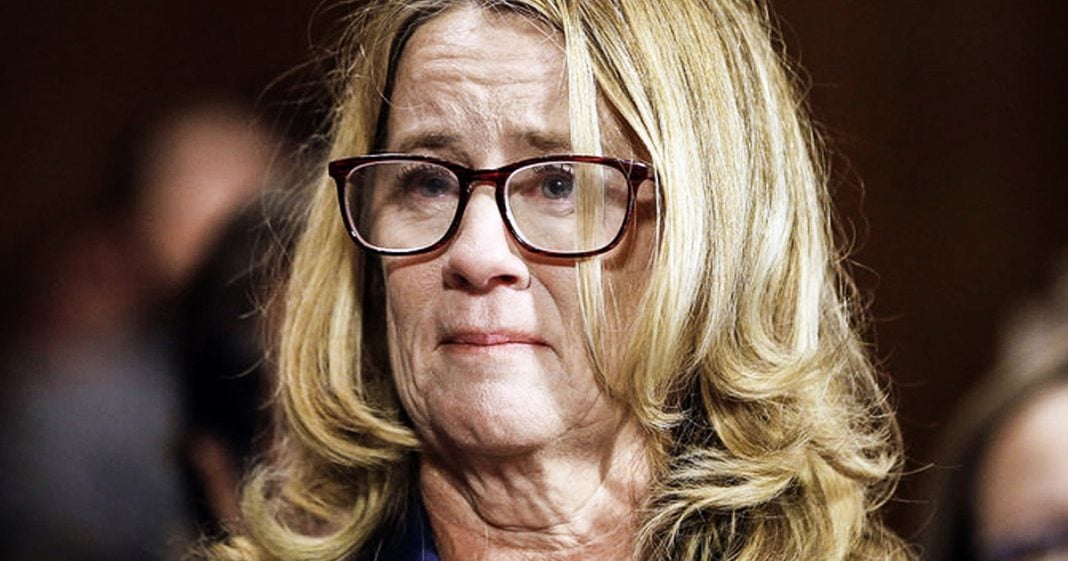 Dr. Christine Blasey Ford has reportedly already had to move 4 different times since she testified in front of the Senate due to the sheer amount of threats that she is receiving. Her life has been absolutely ruined by coming forward with her allegations against Brett Kavanaugh, while Kavanaugh himself is enjoying a lifetime appointment to the highest court in the land. Ring of Fire’s Farron Cousins discusses this.

Dr. Christine Ford, the woman who came forward with the first allegations against Brett Kavanaugh, she sat and testified about what happened to her in front of the Senate. That was almost a month and a half ago and still today, this woman has not been able to return to work. She has now had to move four separate times because she continues to receive death threats, and is getting constantly harassed by Republicans here in the United States.

The reason I want to bring this up is because when Tucker Carlson was met at his home by angry protesters, a lot of liberals, democrats, progressives, and everybody on the left spoke out and said, this is wrong. You don’t do that. You don’t go knock on the door and say, “We know where you live.” You terrified his kids, his wife, even Tucker himself.

Liberals spoke out about that. Where are the Republicans speaking out about the exact same thing happening to Dr. Christine Ford? She has been out of the spotlight ever since Kavanaugh was confirmed. She’s not seeking to make money from this. She’s not taking any book deals or movie deals, or anything like that. She just wants to go back to her life. She took an enormous risk coming forward with these allegations that, yes, I believe are 100% accurate. And if the FBI had done a proper investigation, they would agree with me on that, as most Americans out there who understood what was happening, agree with.

Kavanaugh is an absolute disaster, but he’s not suffering any consequences for his actions over the years. That man has managed to fail upwards, and no matter the scheme, no matter the crime that he was alleged to have commit, he has always been rewarded in the best way possible.

And again, Dr. Christine Ford hasn’t been able to return to work. She can’t even find a permanent residence, because Republicans keep tracking her down and threatening to kill her. And you wonder why more women don’t come forward when they get assaulted. This is why, reasons like this. And it may not be as extreme in other cases, but for a lot of women it is.

We have seen too many reports coming out of even police stations who shame women. They put their pictures on the wall under the label, Wall of Shame. There’s actually a lawsuit about that right now, of women who’ve come forward saying that they had been raped. Nobody wants to believe women. Nobody wants to give them the benefit of the doubt, and more importantly, nobody even wants to investigate properly to see if these women are telling the truth.

I believe Dr. Christine Ford, and what is happening to her right now is absolutely deplorable. And the fact that Republicans are remaining silent about it, it tells you everything you need to know about that political party.