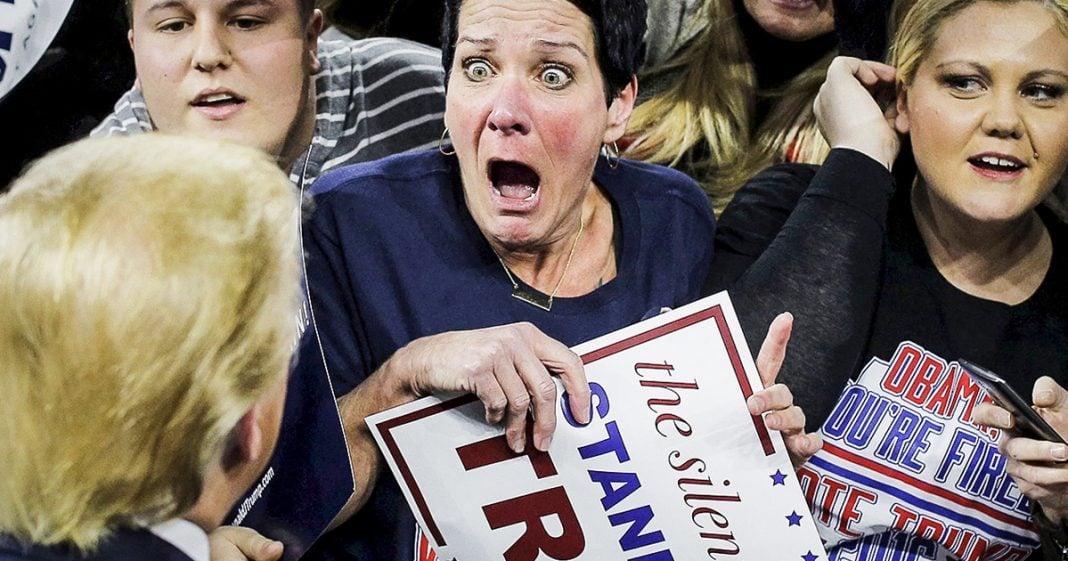 The New York Times recently conducted a series of interviews with average, female Trump supporters in an attempt to find out why these women support such a disgusting man. The truth is that these women have an unhealthy obsession and admiration of him – and those are their own words! This is a cult, pure and simple, as Ring of Fire’s Farron Cousins explains.

One of the most interesting things that we have seen from the Trump administration is his support among white women. I mean, after all, this man actually won white women in the 2016 Presidential Election. He won 52% of white women.

Now, according to polls, that number has now fallen to roughly 40% approval among white women. But still, 40% out there in this country support this man who has been credibly accused of assault and/or harassment by no fewer than 19 different women. The man who they all heard on tape saying how he liked to force himself upon women, forcibly kiss them even if they had a husband and didn’t want him to, and how he would grab them by the genitals just because he could.

40% of white women in the United States say, “I support that guy. I like that.” So the New York Times did what any decent media outlet would do, or in their case, any media outlet that occasionally can do something decent and they decided to talk to some of these Trump supporters, these white, female Trump supporters, at Trump rallies over the last few weeks. And here’s what they found:

The women are nuts! Now, that’s not what the New York Times said but these hardcore Trump supporters are nuts, and they’re pretty much ready to admit that they’re crazy. For example, Rachel Marks, 59, of Billings, Montana. Here is what she said about her love of Donald Trump, “I have an infatuation and a love for this man that’s not normal. I give the highest respect when people are telling the truth and giving their political power. If anything, I have a deeper respect now.” The man lies constantly and everyone who’s not a complete idiot understands that. Every fact check has proven that, even Fox News has had to come out and fact check him because he says things that are blatantly wrong, and you’re sitting there saying that this unnatural love you have for Donald Trump is preventing you from seeing what’s actually happening in the world.

Yeah, I would call that an unnatural love, a love that’s not normal in your own words. There’s more. They’re not quite as disgusting as this abnormal form of love, but here is Joan [Filpot], 69, who attended a Trump rally in Missouri, she says, “He understands why we’re angry and he wants to fix it. He wants to protect this country, he wants to keep it safe, and he wants to keep it free of invaders and the caravan and everything else that’s going on.”

So, we got two things to deal with here. One, first and foremost, these hardcore supporters of Donald Trump, the people who say that, “Oh, he’s telling it like it is” instead of saying “Yeah, this guy is blatantly lying.” They’re a cult. This is absolute cult-mentality, this is what leads to dictatorships and these mass movements of people who absolutely support the worst human beings in history. These Trump supporters are not different.

And second, it shows just how much this racism and this white identity plays in their support for the president. And again, that also goes back to the cult mentality. It’s the use vs. them, protecting our way of life, protecting our alleged culture from these outside invaders. Go back and read some of the speeches from that guy in Germany from the late-30s and early-40s, you’ll find the same language. Look at what his supporters said, you’ll find the same language there too.

This is a dangerous time in the United States, and it’s so dangerous, and I hate to say it this way, but because we have so many people in this country that are so painfully stupid that they don’t even realize that they are the sheep being led to slaughter. People need to wake up. People need to understand what this president is saying and what his words actually mean. It’s not that hard to figure out. It’s just that Trump supporters don’t wanna take that time and tarnish the image of this man that they have now made into a god.