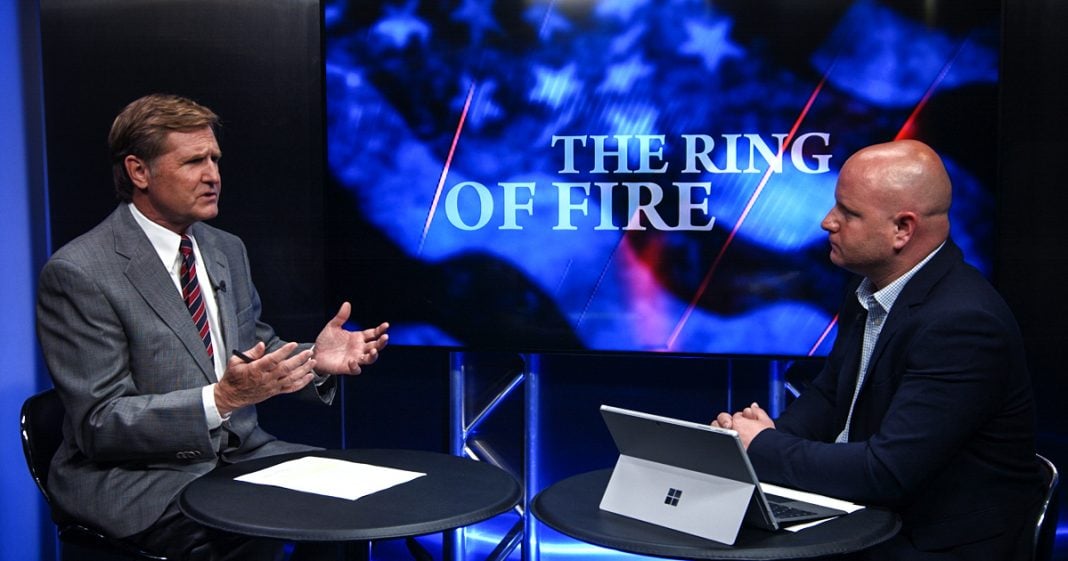 Colleges have found themselves embroiled in numerous sexual assault coverups in the last few years and we’ve barely scratched the surface on how deep this problem really goes. Ring of Fire’s Mike Papantonio and Farron Cousins discuss this issue.

Mike Papantonio: Colleges have found themselves embroiled in numerous sexual assault coverups in the last few years and we’ve barely scratched the surface on how deep this problem really goes. I’ll tell you what I’m seeing right now, Farron. I’m seeing that colleges … I’ve actually been involved in a couple of these cases where I’ve been asked to consult and asked, what is our next step in a case where there has been a sexual assault at a college?

And so here’s what I’ve run into. It is where the college sets up this kind of phonied up on ombudsman group. Okay? In other words, the child has been assaulted. The first thing that happens is you have to go to the ombudsman here on campus and you have to tell us your story there. Okay? Now you would think that that would be a group that would try to encourage, first of all, you need to file charges immediately. You need to do something criminally.

You would hope that they would do that, but the truth is what ends up happening is that ombudsman group does just the opposite. They keep everything in house. They say, let’s keep this quiet. Let’s not talk about all the bad things that this person has done. Let’s not call the shots. Let’s not put any sunlight on this. The reason they do it is they want to keep the number of these reports down. Okay?

They don’t want … They’re protecting themselves. They’re not really protecting that student that goes to this committee, tells the story, and the committee is there for one reason, and that’s to make sure this doesn’t get out. I’ve seen it with Yale. Last time I ran into it was at Yale University and they have this really tight little schematic that the person goes there, tells the story in the story, and the story dies.

Farron Cousins: Well, you know, as prevalent as these sexual assault crimes are right now, and especially with the Me Too movement with women coming forward and showing how rampant it really is, colleges, one of the worst places where this happens just because it’s institutionalized, but they have it in their own personal agenda to keep these numbers down. Because when you’re researching where you want to go, you want to go to the place that’s had 20 rapes or the place with zero rapes? Well that zero number may not actually be accurate because as you point out, they’re trying to cover it up and they deem it through their own in house people.

There’s no merit to this because they don’t actually look into it. But the other side of it that we also see is the institutionalized coverups of actual employees, not just sexual assault on campus, but the assault on campus by faculty members, by the athletics department where it’s so rampant. Right now, we’ve got Michigan State University. That’s where Larry Nassar was. We have USC, we have Penn State, we now have Ohio State, the one that Jim Jordan, where he was wrestling coach, did nothing about it because that’s what people have to understand.

It’s not just that this horrid person like a Larry Nassar goes and works at this place. You don’t sexually assault hundreds of women like Nasser did without somebody else there knowing it. Same thing with Jerry Sandusky at Penn State. We find out through the investigations and the lawsuits that people knew it all the way up the chain. They covered it up because Sandusky was good at his job. Nasser was good at his job, and it’s more important to protect them then to protect the students.

Mike Papantonio: Doesn’t it seem that after all the years of watching the predatory, ugly, disgusting, filthy catastrophe that took place in the Catholic Church and still taking place today … If you believe that anything’s changed, it hasn’t. They simply move these people around like chess pieces. These histories of abuse are disgusting, and they move these people around, and now we’re seeing it in third world countries. Where the Catholic church goes in, we’re building. We’re really seeing it down in South America, Mexico, those areas through there where they take these predators and take them down there.

But to me, the real ugly part of the story is when the university has this child inside the office. Oh, we’re so sorry. This is horrible. Just sign this paper. First of all, it’s a nondisclosure. You can’t talk about what happened here. That’s the first thing they get them to sign. Then after they sign it, they do whatever they do to keep everything really quiet. They don’t want to report it, and the best way that they can accomplish that, keep it all hush hush, is to have this really fake organization. They probably do some of these people some good, but at the end of the day, they’re really there to protect the university.

Farron Cousins: Absolutely. And that’s what people need to understand about all these cases, all these instances. These groups, the colleges, they are always more concerned about protecting their image, protecting their sports team, protecting whatever it is. Like we saw at FSU with the whole Jameis Winston thing. They did everything they could to undermine this woman who actually made these accusations before Winston was even on the football team, but they saw superstar potential in him and they discredited her.

Mike Papantonio: Oh, they made her look like a criminal.

Mike Papantonio: And he was the criminal. Your point is people don’t even understand that about Jameis Winston case, is this didn’t come after the fact after he was on his way. This is before he was ever on any kind of team, was really on nobody’s radar. So these are stories we got to keep up with it. No matter how hard we push, no matter how many lawsuits, no matter how many criminal sanctions, it just continues to go on.