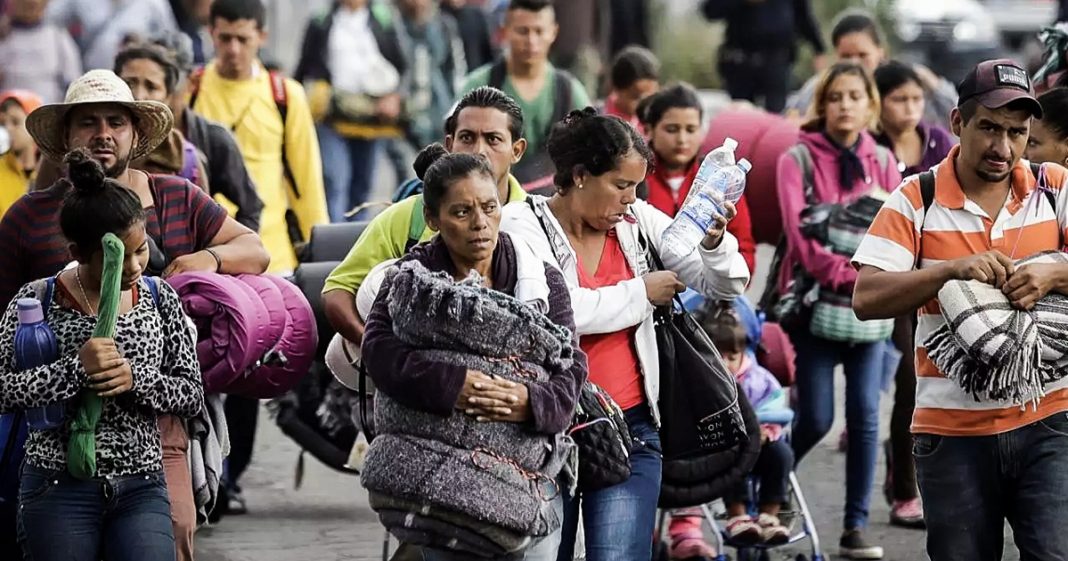 Donald Trump and his new acting Attorney General lapdog are about to break US and international laws by attempting to re-write the rules for asylum seekers so that they can deny every single one of them. This move is technically illegal on multiple grounds, but that hasn’t stopped this administration from doing whatever they want in terms of immigrants. Ring of Fire’s Farron Cousins discusses this.

Our new acting Attorney General Matthew Whitaker is trying to prove in just a couple days on the job that he can be absolutely just as bad if not worse than Jeff Sessions, and he’s being aided by both Donald Trump and Homeland Security Secretary Kirstjen Nielsen. Here’s what’s happened in just the last few days since Whitaker took over.

The DOJ, along with Homeland Security, are drafting a new rule proposal that the president is expected to go ahead and approve if he has not done so already. Things move pretty fast. It’s likely to have already happened. That is going to basically ban people from trying to seek asylum to enter the United States. It would take away the ability of people to seek asylum to come into the United States no matter what they were facing from the threat back home.

This move is illegal. What’s interesting here is I read this article attacking the administration for this from the BBC where they said, “It’s not illegal for them to do this.” It is. It is. US law specifically was written, passed by Congress, signed by past presidents on multiple different occasions that say that we have to do this. And now Trump thinks he can just have his DOJ rewrite the law and do whatever the hell he wants. You can’t just rewrite it from the DOJ to undo an act of Congress, a bill that was signed by a president. That’s not how that works.

The administration does know that. What they’re hoping, at this point, is that once they do this and put this new rule into effect, it’s going to be challenged by the courts. Eventually, boom, boom, boom, appeal up to the US Supreme Court where they know that their loyal Republican stooges are going to approve it and as an accident, I guess, of approving this, it will approve the president’s ability to override a rule of Congress, to override a past president without having to get the approval of Congress, which is going to take us one step further into a full-blown fascist dictatorship. That’s what this administration is hoping will be the end result from all this.

Let’s get back to the asylum seekers. Last year President Trump lowered the number of people we would let into the United States seeking asylum. I think it was about 70,000 prior to that. Possibly as high as 80,000. He lowered it to 50,000. Now, he wants to take the number down to zero. None. Not a single one. Even though, and I mentioned the laws earlier passed by Congress signed by past presidents, here’s a few of them: The Immigration and Nationality Act of 1952, The Immigration and Nationality Act of 1965, The Immigration Act of 1990. There was a refugee act, I believe, in 1953 that also called for allowing people seeking asylum. Sometimes they’re referred to as refugees, sometimes asylum seekers, but every one of these pieces of legislation that was passed by Congress, so it is the law of the land, does in some way require us to let these people in. Not to mention, and this is a big one too here, the US is a part of the UN’s convention relating to the status of refugees and its 1967 protocol treaty.

We’re bound by international treaties that we have signed onto to do this. To say that we will take in asylum seekers. So he’s not just breaking law here in the United States. He is breaking treaties and promises that we have made to the United Nations and to other countries around the globe. 100% illegal. So anyone out there, including the BBC, which I hate to attack you and pick on you here, but you’re wrong about this not being illegal. The administration knows it is, and they know it’s going to be challenged. They’re banking on that challenge to go to the Supreme Court, and in a decision that could potentially give them absolute power, they knew what they were doing from the beginning.

That’s what’s happening in America today. That’s why the courts matter, not just the Supreme Court but every court along the way. Because the first court to affirm this ruling, that’s what the Supreme Court is going to have to decide whether or not they affirmed it based on the correct grounds. Not necessarily is the law, the action itself constitutional, but was the reasoning of the lower court sound. That’s what people don’t understand about the Supreme Court.

They’re not necessarily determining the constitutionality of something on most cases. They’re trying to figure out if the lower court’s ruling was correct based on the reasoning and the logic and the evidence. Constitutionality is typically determined in the lower courts. And because Donald Trump has packed those with well over 100 Republican sycophants, it’s likely this thing is going to stay, which means no more asylum, which means people fleeing violence are going to be sent back to these violent areas to face death or other horrible consequences. All because Donald Trump had to throw a little bit of red meat to his base, and in the process, the side effect, get a little bit more power for himself.