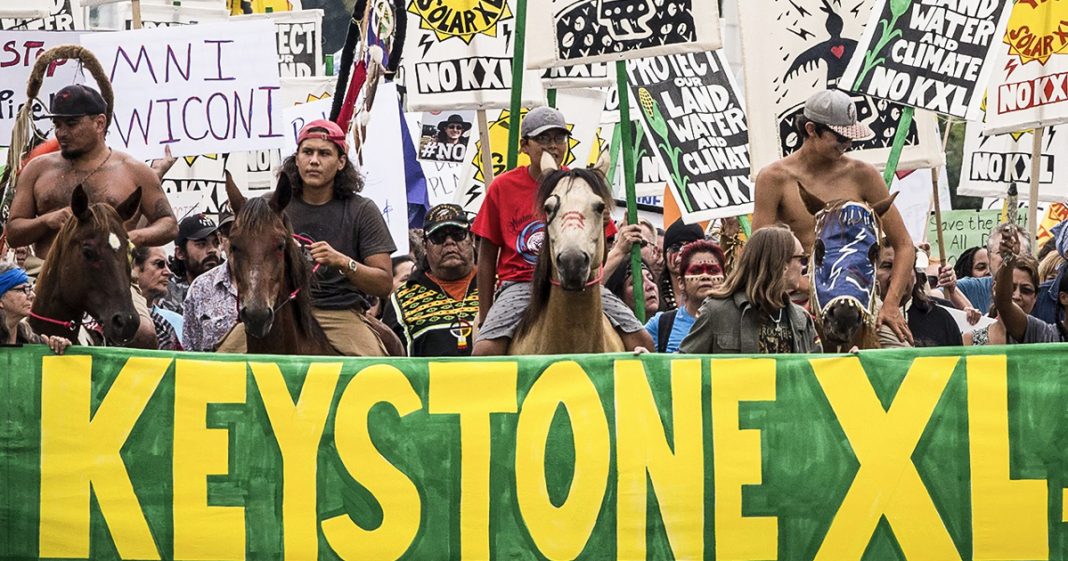 A federal judge this week gave a huge victory to environmentalists and anyone who cares about the safety of our planet by ruling that construction on the Keystone XL pipeline must come to an immediate halt. Judge Brian Morris said that the administration failed to comply with the Administrative Procedure Act which requires the government to consider all possible effects of projects, including climate change and environmental destruction, which Trump certainly did not do. Ring of Fire’s Farron Cousins discusses this ruling and what it means for the future of the project.

In a huge victory for those of us who care about living in a decent environment this week, a federal judge issued a stay in Donald Trump’s decision to go ahead and fast track the Keystone XL Pipeline, here in the United States. Judge Brian Morris is the one who issued the stay, which temporarily, yet immediately, halts all construction on the Keystone XL Pipeline. In his ruling, when was actually a phenomenal ruling, he said that the president and this administration violated the Administrative Procedure Act.

When they said that, “Oh, the environment’ll be just fine from this,” they provided no reasoning to give that specific analysis, like why is the environment gonna be fine? You didn’t tell us that. You just told us that everything’s gonna be cool, so we should just go with it. That’s not exactly how it works. You violated the rule that was put in place to make sure that everybody knows exactly what this thing is going to do, regardless of what this thing happens to be.

Here’s some key takeaways from the ruling. I want to read these, because they’re very important, and very damning for the Trump Administration. Judge’s findings here … “The State Department, in issuing the permit, failed to analyze the cumulative greenhouse gas emissions of the Keystone project. The department acted on incomplete information regarding the potential damage to cultural resources in Indian territory along the route. The department appears to have jumped the gun.”

It’s not just the environmental impact of Keystone XL, it’s also going through sacred tribal lands, that they just said, “To hell with I, we’re gonna do it anyway.” Yeah. Also violated the rules put in place to prevent things like this.

“Department failed to make a fact based explanation for it’s course reversal,” which was when the Obama Administration decided not to do the project and Trump did. ” … let alone a reasoned explanation. An agency cannot simply disregard contrary or inconvenient factual determinations that it made in the past, any more than it can ignore inconvenient facts in the present.”

That’s pretty damning against this administration. He’s basically telling them that, “You had these facts that tell you this thing’s gonna be horrible, and you chose to ignore them and tell us the opposite.” Pretty bold statement there from the judge.

Finally, “The department’s analysis that climate related impacts from Keystone would prove inconsequential, needed a reasoned explanation and it did not provide one.” That’s what I had mentioned previously, that they said, “No, everything’s gonna be cool with the environment. We don’t have to give you a reason, and we’re not going to.” Again, under this Administrative Procedure Act, you have to do those things.

The bottom line is that this administration did not do their due diligence. They lied to the American public. They lied to their own cabinet department, in approving the Keystone XL Pipeline, which will do nothing to help Americans with their energy independence. All that oil’s coming from Canada down to the Gulf Coast, to be sold overseas. The Keystone I Pipeline, up in Canada, has had constant leaks and constant breakages, which has lead to a lot of environmental destruction.

The Keystone XL Pipeline would not be monitored properly. There would be flyovers, I believe, once a month. It would create roughly 36 permanent new jobs here in the United States. It would go through sacred lands of Native Americans. It would pass over the Ogallala Aquifer, one of the largest fresh water aquifers serving millions of people here in the United States. By every possible stretch of the imagination, based on every single fact that we have, this project would be an absolute environmental disaster. That is why it is so important that this judge ruled, if only temporarily, that the construction has to immediately come to a stop.