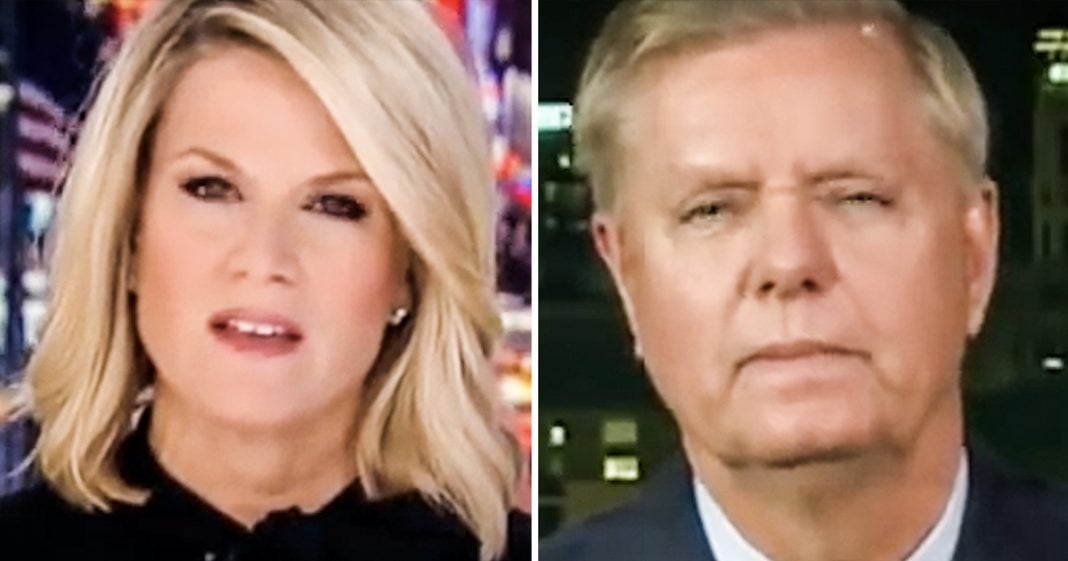 Lindsey Graham was left confused and startled after a recent appearance on Fox News where they reminded him that he had once said that firing Jeff Sessions would mark the beginning of the end of the Trump administration. Obviously he doesn’t feel this way anymore, but his stupid face when they showed him the clip apparently reminded him that everything online lives forever. Ring of Fire’s Farron Cousins discusses this.

You know, there was a time when some Republican Senators said that they would absolutely be shocked and angry if Donald Trump got rid of Attorney General Jeff Sessions, but that was way back when. I mean this was 2017, right? And apparently all of those Republicans forgot that they said these things, including Lindsey Graham, who was actually just confronted on Fox News about his defense of Jeff Sessions after Donald Trump fired him, which really left Lindsey Graham shocked and confused about them calling him out on this. Here’s the clip. Watch Lindsey Graham’s face and see his reaction. This is priceless.

Host:
You heard the reaction from Senator Joe Manchin, and I would just remind you as many have been reminding you today of what you said back in July of 2017. Here’s this.

Lindsey Graham:
If Jeff Session is fired, there will be holy hell to pay. Any effort to go after Mueller could be the beginning of the end of the Trump Presidency unless Mueller did something wrong.

Host:
So given where we are now, what do you say now?

Lindsey Graham:
So when was that? What year?

Lindsey Graham:
So … yeah. So, what I’ve been saying for months is that everybody, ever President deserves an Attorney General they have confidence in and they can work with.

That was almost painful, to see Lindsey Graham squirming like that, when was that, who, what, I don’t know that man, I’ve never seen that guy in my life, who is this guy? Look, Lindsey Graham has done probably the most apparent about face on Donald Trump. I mean in the first year, 2017, Lindsey Graham was out there as one of those never Trumpers, telling the media what a horrible person he was and how he disagreed with him here and disagreed with him there, just like that little clip we saw, if he gets rid of Jeff Sessions, it’s the beginning of the end of the presidency. Then this year, he like most other Republicans, decided I love Trump. He started going golfing with him. They became best buds, Lindsey Graham even praised him for how good of a golfer he is.

Now of course, even back last year when Lindsey Graham was attacking the President, he was still voting with him more than 90% of the time, so he never actually put up any resistance to what Donald Trump was trying to do, he just liked to portray himself in the media as a guy that wasn’t a big fan of him.

Lindsey Graham is an absolute disgusting character who has no loyalty to his little friends in the Senate. He has no loyalty to the rule of law, more importantly. He knows Whitaker’s gonna come in here, try to sabotage the Mueller investigation, but at this point it may be too late to do so. Hopefully it is. Hopefully Mueller has crossed his T’s and dotted his I’s and he’s got exactly what he needs and no amount of defunding or interference from this administration is going to effect that. We won’t know until the next round of indictments come out or until the final report comes out.

But Lindsey Graham, actually being confronted on Fox News about his change in positions is one of the most priceless moments that we have seen this year and it is something that I am going to cherish for a very long time.