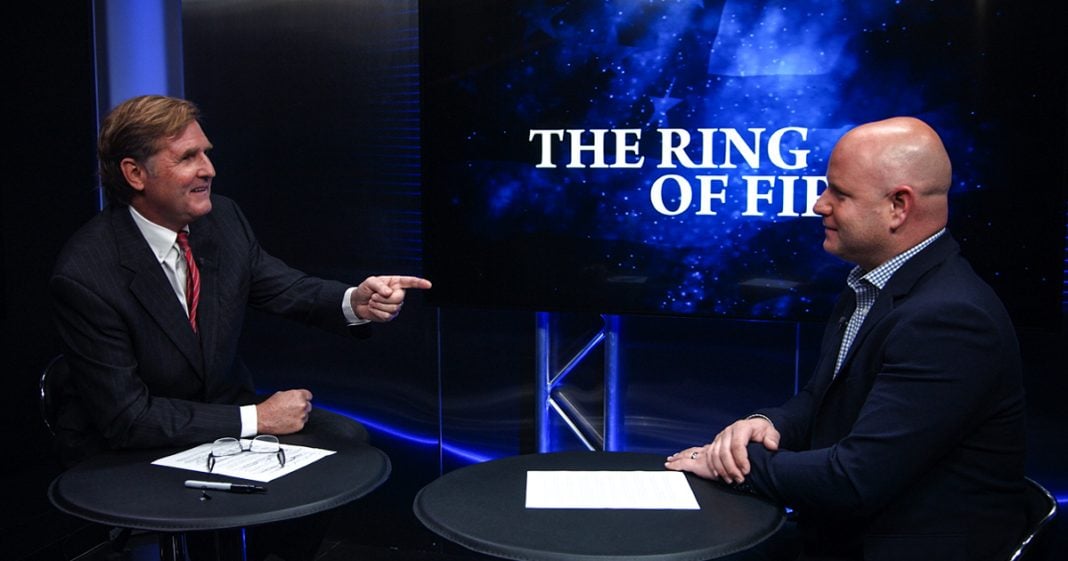 There’s no question that there were some major progressive victories on election night this year, but in terms of this being a “blue wave,” the results tell us that it was anything but. Its fine to be excited about the victories, but if Democrats underestimate how motivated the Republican base was this year then they will be in for a very difficult voting season in 2020. Ring of Fire’s Mike Papantonio and Farron Cousins discuss this.

Mike Papantonio: I’m going to go after the Democrats as far as their Blue Wave. And we’re going to be … actually talk honestly in an unscheduled conversation about what really happened here.

Farron Cousins: Somewhere around that, yeah.

Mike Papantonio: How long have you been a commentator for Ring of Fire?

Mike Papantonio: Okay, long time, long time. But I think our brand hopefully has always been to call balls and strikes. I’m not a Democrat, I’m not a Republican, I’m an Independent, I don’t know what … I’ve never really asked you what your politics are. That’s a good relationship.

But I watched the mid term elections, and what I was doing is, I forced myself to go to Breitbart and then Drudge and then Daily Caller, and then I’ll go to Huff Post, and AlterNet, and, you know, TV … I’ll mix it up. And I’ll try to say, what do I take away from that? What was my take away?

Well the biggest takeaway that I came out of this last election is, the big lie. Okay. The Democrats are still lying to the Lincoln file. We’ve changed the course. Things are going to be different now. Okay.

Let’s talk about the house. Just take the house. What 36, 37 turnover in the house?

Farron Cousins: Yes, somewhere in the 30 margin. Votes are still coming in.

Farron Cousins: So we still don’t know a final.

Mike Papantonio: Yeah, yeah, yeah, okay so, so if we were to take just the typical mid term election that historically has always been there. And we were to say, how many seats shift in a mid term election? In the house. How many typically shift? It’s going to be anywhere between 20, 25, I think to 40. Somewhere in that range.

Mike Papantonio: That’s typically what’s going to happen. Now historically that has always happened in every mid term election. The only time it hasn’t … the last time I can remember is Bill Clinton. Bill Clinton was being impeached, and I think 65 or almost 70 house seats flowed over, Republican’s won. It was the exception to the rule.

Mike Papantonio: It’s the norm. We shifted, and you’ve got Huff Post, and TMP or TPM whatever talking points or whatever …

Farron Cousins: We screw up underestimating how fired up the Republican’s also were. Polls, everything and all the smart number crunchers out there, told us the Blue Wave is coming. Been telling us for months. And it didn’t because they never took into account the fact that Republican voters are also mad.

Most of us yeah, thought Republicans keeping the senate was a given. None of us thought they were going to take extra seats from the Democrats. So that’s …

Mike Papantonio: Nobody did.

Farron Cousins: That is a big turnover. The only real victories were ballot initiatives-

Farron Cousins: You know, 1.4 million voters in Florida with felony records will get to vote in 2020. That could change this stage forever.

Farron Cousins: The other … medicate expansions. In three red states. Those are huge. Seven governorships flipped from Republican to Democrat. Those are big. Taking the house back by a small margin when you’ve got such an embattled Republican party, that’s not a victory.

Mike Papantonio: Okay, okay, listen, Farron, here’s the way I see it okay. First of all, the Democrats … I heard that goof, I mean the guy’s an absolute buffoon. The Schiff guy. Where is he … in California-

Mike Papantonio: He’s a buffoon. Okay. He’s coming out immediately saying all the wrong things. You don’t come out the next day, okay, investigations re going to be … we’re going to impeach, we’re going to now investigate whether or not there’s a grounds to remove session … The guy is freak. They need to put a muzzle on this little freak. Because he’s killing the chance for progressive changed, like we talk about all the time.

If the Democrats now go, and they make investigations and, you know, they make all of this, all they’re about, and they forget the thing that you talk about all the time. They forget, what does the party stand for.

Mike Papantonio: What is it that we … what is the word association with Democrat. Is it Democrat in jobs? Is it Democrat in bringing jobs back into the country? Is it Democrat … what is it? You see, what is it? Is it Democrat … I have no … If I were to ask you today, I can say, okay, Democrat on social issues, yeah, I got it. You know they’re going to be good on social issues. No question. That’s important. But that is not resonating with America. And they don’t understand. This was no huge victory. And these nuts that are out there say, oh this is a ground shift. If they believe that, and they don’t take note about what’s really happening, we’re going to be in real trouble in 2020.

Farron Cousins: It’s always dangerous to get a false sense of hope and security and safety. And I think a lot of these outlets are being very irresponsible. And some of them are outlets I truly respect, not Huffington Post of course, but, you know, some of these outlets … and I don’t even want to call them out, but I’ve been very unhappy with their reporting saying how great this was because it’s not. But here’s the thing-

Mike Papantonio: It is an absolute fraud. Listen, Abrams loses in Georgia. The African American population in Georgia it’s 65%. Those are the demographics. 65%. Which leads me to the idea, how angry were the Republicans? I don’t care if it’s even razor thin. How angry do they have to be, to be … for Kemp, who is an absolute fraud. All you’ve got to do is read the first page on Kemp, they guy’s a fraud. So Kemp beats Abrams in Georgia! Tell me what’s your reaction to that?

Farron Cousins: No it’s instant, and a lot of it has to do with, you know, reports are coming out till Wednesday afternoon … there’s about 15 hundred voting machines locked in a warehouse because they wouldn’t release them. So you had areas waiting four, five hours. So that played a role, but, it shouldn’t have even been close for that to matter.

Farron Cousins: And that’s the issue too.

Mike Papantonio: How would it even happen? You’re talking about voting machines. Every election, as you’ve pointed out in some of your articles, you’ve got the same people coming out saying, we’ve got to get the voting process under control. We’ve got to stop fraud, we have to have machines that work. We have to have the polling system work in a way that works.

Farron Cousins: And then they forget about it within a week.

Mike Papantonio: About it within four months.

Farron Cousins: But listen, look, Democrats want to come in, and they think that they got elected on a mandate to investigate Trump. That’s not what it was. You look at polls on issues. They want climate change action. Democrats, Republicans, and everyone else, same for Medicare for all. Debt free college is almost at those numbers.

Mike Papantonio: About it. And again, I am way, way not a Democrat. Way not a Democrat. I’m way further left than most Democrats, I can promise you that. But I hate to see it’s affecting the entire Progressive movement. Because you’ve got this thing. This DNC thing, that we can’t shake up. It’s like Michael Moore came out this week, and he said, really, you’re going to run Kamala Harris and Cory Booker as presidents. Michael Moore even saying, are you crazy? Get away from those old Democratic days. I don’t know. We got to talk about this a lot more.

Farron Cousins: Well you also have the crazy faction that thinks that Michael Avenatti will be a good presidential candidate.