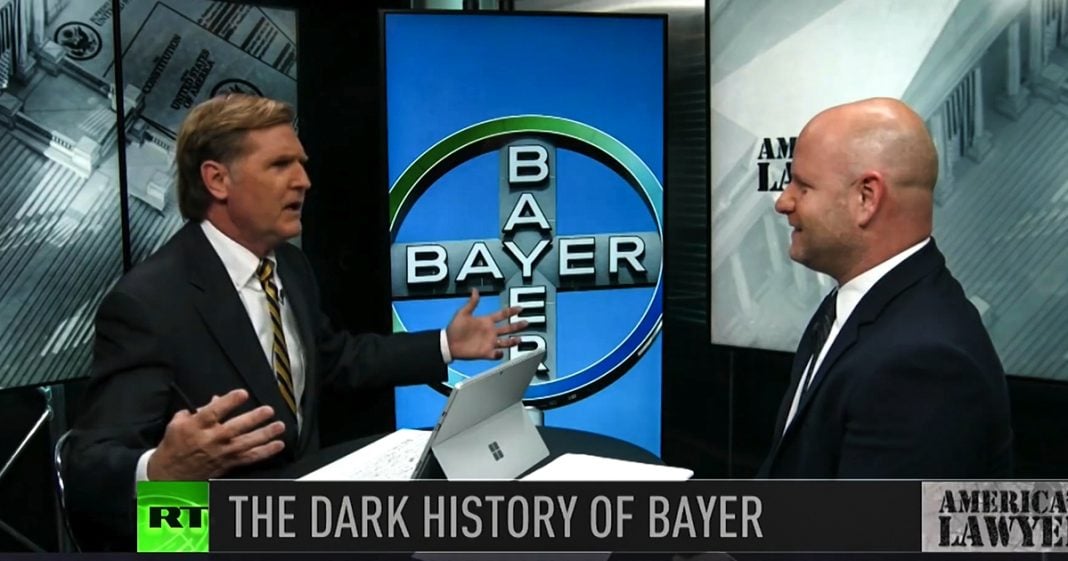 Via America’s Lawyer: Mike Papantonio and Trial Magazine Executive Editor Farron Cousins take a look at the dark history of Bayer Corporation, and how this major international corporation was founded by Nazi war criminals.

Mike Papantonio: During World War II, a company called IG Farben was in charge of making the deadly chemicals used in Nazi Concentration Camps. As a reward for their help, the IG Farben was allowed to conduct experiments on Jewish prisoners, and test out their chemicals and their medications on these people.

Once the war ended and the executives from IG Farben were charged with war crimes, they went and formed a new company called Bayer. A company that we’re all familiar with today. But even though you know their name, it’s unlikely that you know who Bayer really is. I’m joined by Farron Cousins from The Trial Lawyer Magazine, to tell us a little bit about this story.

Of course, you know my involvement with Bayer. I think every major case that Bayer has faced is a case that I have brought in some form or fashion. All the way back to the HIV contamination case, which is horrendous.

Mike Papantonio: The facts, you know the facts. I mean, you’ve written about the facts. Talk about it a little bit.

Farron Cousins: Well, on that particular cases, it was Bayer Pharmaceuticals, late ’70s, early ’80s, they came out with this new Factor Eight, it was called. They were gathering platelets from healthy individuals, using it to create this Factor Eight, to give to hemophiliacs because their blood wouldn’t clot. They gave them this, it was supposed to help their blood clot.

Mike Papantonio: They were going where there’s a lot of poverty, intercity poverty, where people were trying to make money simply by selling their plasma.

Mike Papantonio: Yeah, I handled this case as you probably know. What’s so startling about it, once it was very evident that the blood supply that they were using to make Factor, to come up with this drug for hemophiliacs. Once they knew that, they took it off their market in America, and then they sold it all over the world.

In other words, the same stuff that they knew had this HIV virus in it, they sold it in Asia, sold it in South America. The ugly part of it, of course, is nobody was prosecuted. But in that depo, I’ve taken so many depositions. I thought one deposition I think is relevant. Maybe we can look at it today. But it is a deposition where I’m talking about the war crimes of Bayer.

How they were involved with the Zyklon, with gas at Zyklon-B gas at Auschwitz. How the company actually paid for experiments that were done by Mengele, who of course, we know his history. He was in Auschwitz, and he performed a whole battery of tests on people of every imaginable kind.

He injected chemicals of every kind, they were experimental chemicals that they were trying to find out, would it kill people, would it make them better. He was called the Angel of Death, that tells you how bad the man was. I want to play a clip from a deposition I took of a Bayer executive, Leslie North.

I asked her what she knew about the company’s history, and here’s how she reacted when she learned the truth. I really think she knew this and was trying to lie about it, and cover up the fact that she did know about it. Let’s take a look.

Mike Papantonio: I feel that you know enough about their history as a company, for example, to be proud of the leadership of that company. You proud of that?

Mike Papantonio: Why are you so proud?

Leslie North: Because I believe that the individuals who have led Bayer have been smart, authentic individuals, who have demonstrated success over time.

Mike Papantonio: The leaders have been what now? Smart and what else?

Leslie North: Can somebody read that back please.

Mike Papantonio: Let me have 2.32. Now, do you recognize this man Fritz Ter Meer, as being one of those smart, authentic leaders at Bayer? Do recognize, first of all, do you even know who Fritz Ter Meer is?

Leslie North: Are you asking if I see the picture?

Leslie North: I see this picture.

Leslie North: I have no idea what it might be.

Mike Papantonio: All right. Well he says he was a German chemist and a Nazi war criminal. Now, where you were telling me about leaders of Bayer being authentic and smart, did you know about Fritz Ter Meer?

Mike Papantonio: Did you know ma’am, that Fritz Ter Meer, after he was released from prison for being a Nazi war criminal there at Auschwitz, that he became a supervisory board chairman of Bayer. Did you know that? Would you go up on this, I don’t think she’s ever seen this before, so if you would quote, see, there you go, look quote right here, there you go.

It says, “Fritz Ter Meer also worked for Bayer and later a IG Farben. He was involved in the planning of Monowitz Concentration Camp, a satellite camp of KZ Auschwitz. He was sentenced to seven years in prison by the Nuremberg Trials in 1948.

After he was released in 1951, he became a supervisory board chairman of Bayer AG. And he retired in 1961.” Now, the first time you’ve ever heard that is today?

Mike Papantonio: And when you were telling me that your knowledge, what I’m trying to figure out is what is your real knowledge of the history of this company, you understand? Your knowledge is that the leaders for this company have been, for Bayer had been smart, and they’d been authentic? That’s what you told me just a minute ago, right?

But the war crimes that he was particularly prosecuted for, hundreds upon hundreds of thousands deaths, they pinned on him, Mr. Fritz Ter Meer.

Mike Papantonio: Who, by the way, to this day, every year, they put a wreath on Fritz Ter Meer’s grave. Understand, these freaks, that Ron Bayer, have never apologized for this. The only time that came up Elie Wiesel, of course, who wrote Night, who was at Auschwitz, who lost his entire family in the death camps. Elie Wiesel writes this book.

He happens to be at a seminar, a speech of some sort, and they make this passing, almost this non-apology to Elie Wiesel. But they’ve never apologized to the public. The U.S. government under Truman took all of the scientists and let them go.

Farron Cousins: Right, none of this could have happened is what the Nuremberg Trials determined without IG Farben, which went on to become Bayer. But they also, they weren’t just operating at Auschwitz, they had their own laboratory there. They made a deal with the Nazi government, we’re going to give you the Zyklon-B chemical to go kill people, and in exchange, we’re going to pay you a small sum of money. You feed us regularly slave labor.

Farron Cousins: Right, so they’re at Auschwitz. They built this IG Farben laboratory. There’s documents that show that they’re bragging our relationship with the SS is hugely beneficial. Eventually, all their slave labor would die. So they would talk to them, and the documents also show this, “Okay, we have to give you another payment, please send us a fresh shipment of bodies.”

But look, it goes well beyond Factor Eight. It goes well beyond. Look, I handled the case against them for Yaz. That tells a story. I mean, there was one that I worked up to trial. They had to settle the trial because I had found all of this information about their background, and they were bragging. They wanted to go to the jury and brag about what a wonderful company they are, because they sell Aspirin.

On the eve of trial, they settled the entire Yaz project, but it was only because we were able to dig up the history. They were going all over the world bragging about what a wonderful company they were. Land this for me, why is this important today?

Farron Cousins: This is important today, I think the main reason, because the other corporate media won’t tell the story. In fact, they downright refused to tell it when we pitched it to them, with the documents, going from outlet to outlet, saying, “Here it is. You need to tell your people this.”

Farron Cousins: That’s why this is important to be able to tell this today, because people are dying from Bayer’s actions.

Mike Papantonio: This is the only kind of place you hear these stories.

Mike Papantonio: Farron, thank you for joining. Again, these stories every week. We try to cover stories that nobody else is talking about. This is one of them.