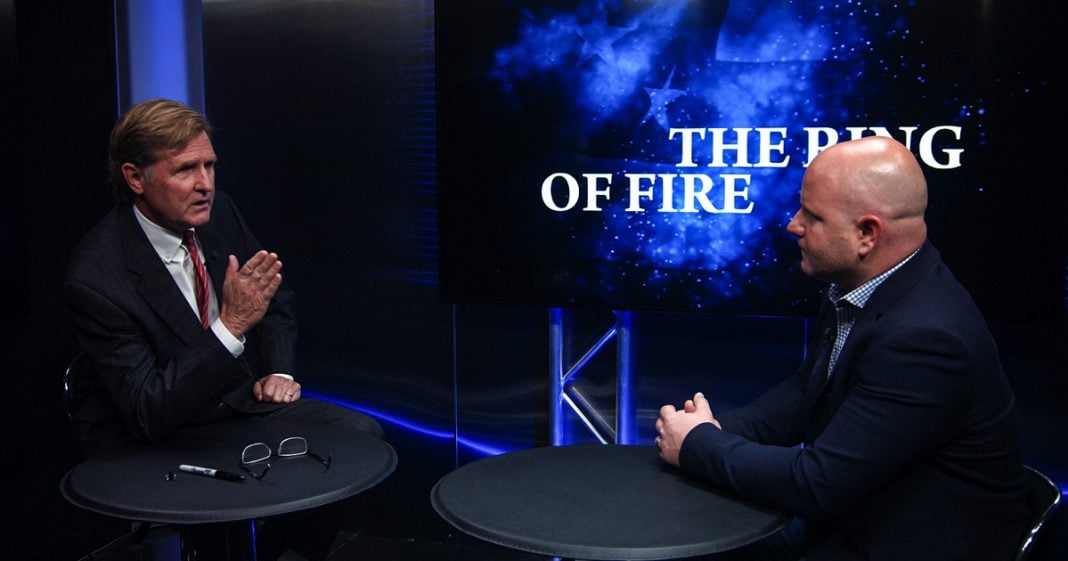 Fox News host Tucker Carlson received a shock when a group of angry protestors showed up at his home to shout at him and his family. There’s no question that Tucker has made some horrible and disgusting comments on his program and has helped push false narratives and foster white nationalism, but these protestors also crossed a line and they are hurting the Progressive movement. Ring of Fire’s Mike Papantonio and Farron Cousins discuss this.

Mike Papantonio: Antifa, fringe left has now become very much a part of what the Republicans are doing to hang around the Democrats. I mean, they’re getting to the point to where Democrat equals Antifa. That’s their goal, and so, the story that came out this week, Tucker Carlson is in his home with his family. Now, understand, I used to be opposite Tucker Carlson, and many times on television where I’m on the left, he’s on the right. Like it or not, he is a brilliant man. He honestly is. I think the times that I was on Fox, if I were to say, “Well, who is it that I really respected on the other side of the table,” it would’ve been Tucker Carlson.

Farron Cousins: Well, even back in the MSNBC days.

Farron Cousins: He had a show there, and was actually fair at the time.

Mike Papantonio: He was. He was, and then of course he shifted because …

Mike Papantonio: You know, you get paid to shift.

Mike Papantonio: Both sides do. I watched Rachel Maddow, who you know I used to work with.

Mike Papantonio: I used to do a radio show with her in the Air America days, and I would listen to such great analysis from her, because she’s truly a brilliant woman. But you know money gets in the way. You know, “Here’s eight million dollars, ten million dollars. Would you take the party line?” Now that’s where Tucker has shifted back to. He starts off to the right, moves MSNBC. I really think he moved to the middle.

Mike Papantonio: Then he moves to the right back when he’s back with Fox. But, nevertheless, there’s no way to talk about Tucker and not say the guy is … he has a very sharp analytical mind. Antifa shows up at his house. His family is there, his children, his wife. They’re outside screaming. They even approach his front door, yelling, “We know where you live.” What’s your take on this? I mean, at what point does … I don’t know that it’s driven by Democratic leadership, but this is being hung around their neck. I mean, I know you disagree with me somewhat on that, but I think that’s where it’s edging to.

Farron Cousins: Well, yes, Republicans are attempting to hang it around their necks, and listen, I don’t agree with this at all. I don’t agree with them doing that. There comes a time when you do cross a line obviously. With the people who walk up to like a Scott Pruitt or a Mitch McConnell sitting in a restaurant, and they say, “Hey, you wanna destroy my environment. Could you tell me why?” Or, “You’re trying to cut my grandmother’s social security and her Medicare payments. Would you mind telling us why?”

Farron Cousins: A hundred percent okay with that.

Farron Cousins: But when you come to somebody’s home, and it doesn’t matter Tucker Carlson has become a horrible, racist person. You can see it when he talks about his … afraid of the cultural shift. It’s obvious. You don’t go to his home, and you don’t bring a gang of people with you, a mob of people with you, and threaten, saying, “We know where you live.” That has crossed a line.

Farron Cousins: Absolutely not! It absolutely hurts everything that progressives are working for, everything the Democratic party would like to do, and it just gives more fodder to the people out there who are saying that the Democrats are an angry, violent mob.

Mike Papantonio: I expect this sometimes from the fringe right.

Mike Papantonio: I mean, I was raised in the South. I was raised all over central Florida, where the fringe right is. They flourish, and you know it almost brings you to the same kind of intimidation that African Americans had to suffer through. There’s no way to say this is okay, and unless somebody gets that under control, I think it’s gonna continue hurting the Democrats, because for some reason I see that label moving closer and closer.