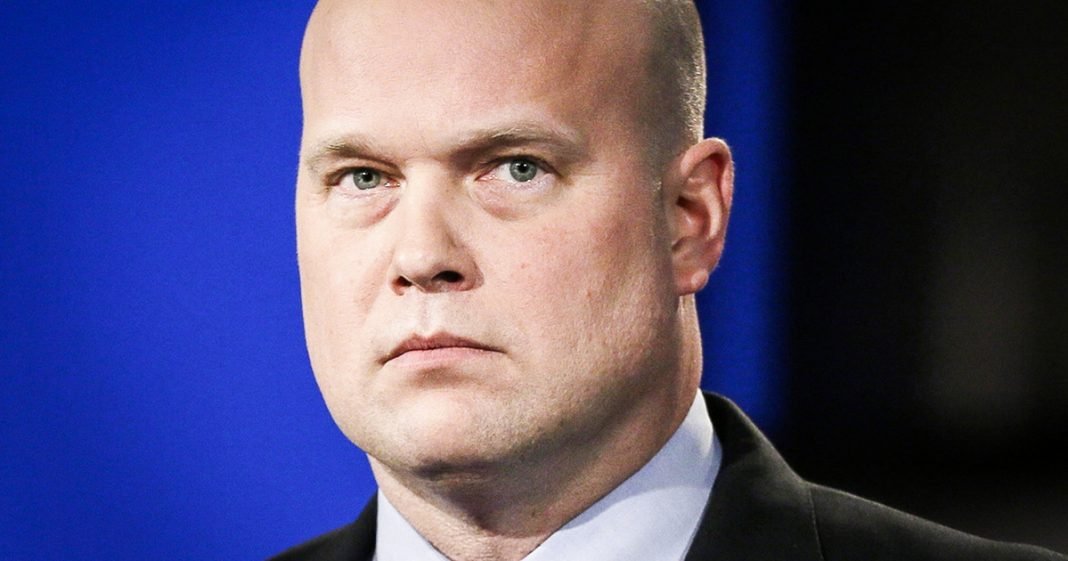 Now that Jeff Sessions is officially out as Attorney General, his temporary replacement will be Matthew Whitaker. And as seems to always be the case with this administration, Whitaker’s past is filled with troubling stories. He once sat on the board of a company called World Patent Marketing which was sued by the federal government a few years ago for being a complete scam and stealing millions of dollars from hopeful inventors. Ring of Fire’s Farron Cousins discusses this story.

So Matthew Whitaker who is at present our Acting Attorney General after Donald Trump kind of forced Jeff Sessions to resign. We’ve already talked about the fact that Whitaker is a guy that wants to end the Mueller probe. He has expressedly said so in an op ed, and actually laid out the blueprint for how he would do it.

Everybody knows about that part though. But what a lot of people may not know is that Whitaker is also a professional fraudster. Last year, even before he joined Jeff Session’s staff at the DOJ, an op ed … Not an op ed, an article came out explaining just what a fraud Matthew Whitaker truly is.

So thousands of wannabe inventors, wannabe, you know, innovators in the United States, sent their ideas down to this company, paid them thousands of dollars while Whitaker was sitting on the board and then they did nothing. They pocketed these people’s money, and they didn’t do anything. They did nothing that they promised.

And we know they did nothing that they promised because that’s what came out from a Federal Trade Commission lawsuit against this company. So the federal government itself had to step in and sue this company that Whitaker was on the Board of Directors of because they were scamming consumers.

It actually gets even worse than just that. While on the Board of Directors, there was one inventor who submitted a bad review of the company to the Better Business Bureau. Whitaker, on the Board of Directors, sent this guy a letter and said the following, basically he threatened him. He said, “I am assuming you understanding that there will be serious civil and criminal consequences for you.” Understand that we take threats like this quite seriously.

He also used his weight as a former prosecutor to try to get this guy to take down his review or retract it to the Better Business Bureau. That’s what happened. Okay, the guy realized he got scammed. Told the BBB and then Whitaker flies off the handle, sends him a letter threatening him because he exposed what this company was actually doing.

And ladies and gentlemen, this is the man who as of right now and for the short-term foreseeable future is going to be our Attorney General of the United States.